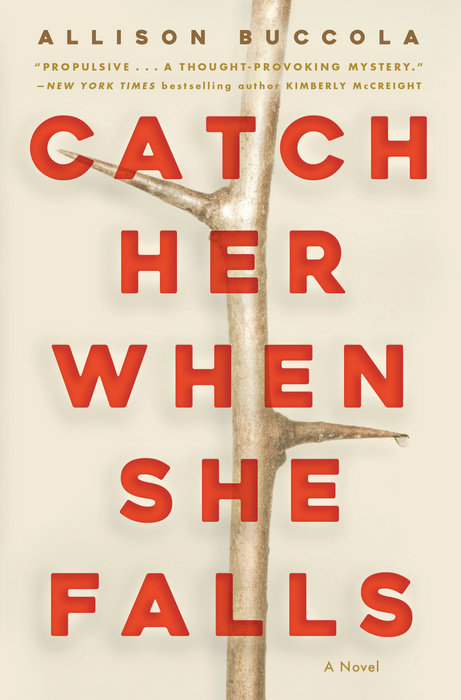 Catch Her When She Falls, a psychological thriller by Allison Buccola

Catch Her When She Falls 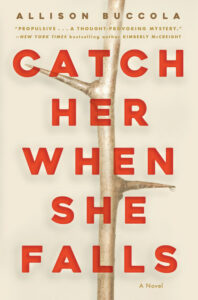 In this “propulsive” (Kimberly McCreight) debut thriller, a young woman questions everything she thought she knew about the shocking murder that changed her life when she was in high school.

“A riveting game of cat and mouse with a startling conclusion.”­—Liv Constantine, bestselling author of The Last Mrs. Parrish

ONE OF THE MOST ANTICIPATED BOOKS OF 2022—She Reads

Ten years ago, my boyfriend killed my best friend.

When Micah Wilkes was a senior in high school, her boyfriend was convicted of murdering her best friend, Emily, a star ballerina with a bright future. A decade later, Micah has finally moved on from the unforgivable betrayal and loss. Now the owner of a bustling coffee shop in her small hometown in Pennsylvania, she’s happily coupled up with another old high school friend, the two having bonded over their shared sorrow.

But when reminders of her past begin appearing at her work and home, Micah begins to doubt what she knows about Emily’s death. Questions raised on a true crime blog and in an online web sleuthing forum force her to reexamine her memories of that fateful night. She told the truth to the investigators on the case, but was there another explanation for Emily’s murder? A stranger in the woods. An obsessive former classmate. A domineering ballet instructor. Or the internet’s favorite suspect: Joshua, Emily’s outcast younger brother who hasn’t been seen since his sister’s death.

As Micah delves deeper into the case, she feels her grip on reality loosening, her behavior growing more and more secretive and unhinged. As she races to piece together the truth about that night ten years ago, Micah grapples with how things could have gone so wrong and wonders whether she, too, might be next to disappear.

To purchase Catch Her When She Falls, click on any of the following links: Amazon, B&N, Books-A-Million, Bookshop.org & IndieBound

My Thoughts on Catch Her When She Falls

Buccola hits all the right notes with her debut thriller.

Mingling the angst of high school with the struggle to become a well-adjusted adult, protagonist Micah Wilkes returns to her hometown after leaving for the better part of a decade. Fleeing after the death of her closest friend, she lands back home expecting to pick up a life unencumbered by the violence of the past. But things don’t stay buried in psychological fiction. The past forces itself into the present, and characters have to deal with the fallout.

Micah makes a terrific protagonist. Damaged, but steely, independent, yet craving connection, she provides plenty of internal conflict to engage readers. Sucked into the back and forth between the events of her youth and the impact on her future, we pull for the Micah of today, while simultaneously questioning what went wrong ten years ago. Buccola confidently unwinds the history for us, interwoven with recent events.

Another aspect of psychological thrillers are the layers of grey. What makes a “good guy” and what makes a villain? There’s plenty of blame to go around, with all the characters potentially behaving badly. The murky, messy, human ability to justify our own behavior, when we believe we do things for the greater good, gets explored alongside the complexities of teenage, and adult, relationships.

Micah both needs people in her life, and shies away from the kind of pain she felt from past betrayal. Racing alongside the questions readers have about what truly happened to Emily, are the questions about what kind of life Micah can lead today.

Bundled into the face-to-face interpersonal conflicts is the role social media and the internet plays in our 21st century lives. What does it mean for people that anyone can comment on their most difficult life experiences. What part of the fishbowl are we responsible for keeping clean? Every event has multiple sides, but people can post anything they want on social media or in public forums. Buccola neatly combines the damage inflicted by those who post conjecture as fact and enjoy the limelight of the virtual world while hiding behind an invented persona.

Nothing in Micah’s life is quite as it appears.

A top-notch debut novel with a strong voice and engaging protagonist. I’m looking forward to what Buccola does next.

Catch Her When She Falls — The Interview with Allison Buccola

Catch Her When She Falls is a psychological thriller, a subgenre I’m particularly fond of. What drew you to that kind of story for your first book?

I’m a huge fan of mysteries and books that really get into the characters’ heads, and psychological thrillers combine both those things.

They also create space for messy, complicated protagonists—and complicated women, in particular (like Jessica Miller in Ashley Winstead’s In My Dreams I Hold A Knife and Sophie O’Neill in May Cobb’s The Hunting Wives). Micah, the protagonist in Catch Her When She Falls, is strong-willed, she has a hard time trusting people, and she’s often fighting against herself. I had a lot of fun writing her.

Tell us about your path to publication for Catch Her When She Falls:

My path to publication was wrapped up in parenthood. I wrote Catch Her When She Falls while at home with my son, mostly during his naptimes.

I have a hard time letting things go and probably would have kept revising forever, but I set a deadline for myself when I found out I was pregnant with my daughter: I needed to finish the book and submit it to agents before she was born. Otherwise, I knew it would never happen.

I got extremely lucky, and my now-agent, Julia Kenny, pulled my manuscript out of her slush pile—she’s been an amazing advocate for the book, and it’s been an incredible experience to work with her and my editor, Andrea Walker.

Modern technology—a true crime blog and an online web sleuthing forum—is woven into your plot. Why did you choose to mine current technology? How does it impact the atmosphere and the world that you’ve built?

I came up with Micah while binging on true crime podcasts and documentaries.

I started imagining the lives of some of the minor characters in those series and wondering how this attention would affect them. Micah’s best friend died when she and Micah were in high school, and Micah’s boyfriend was convicted of her murder, and so Micah is no stranger to unwanted gossip and speculation. She has to put up with real-life nosy neighbors at her coffee shop and is troubled by this attention.

But the introduction of anonymous, prying strangers makes this attention feel more ubiquitous: anyone could be watching, and there’s nowhere to go to escape it. It amps up the pressure on Micah and creates a more claustrophobic environment.

Tell us about the small town in Pennsylvania where Catch Her When She Falls takes place:

Calvary is a fictional town, but it’s an old steel town that is now home to a university, not unlike Bethlehem, Pennsylvania.

A lot of the old infrastructure is still in place, including a steel mill, but it’s no longer operational. I wanted Micah to live somewhere in transition, and I liked the mix of people that you get in a town centered around a school: both locals who know all about town history and gossip, and the more transient college population.

You have a JD from the University of Chicago, how does your training as an attorney show up in your writing? Or did you have to unlearn legal writing habits to shift to fiction?

I think my training as an attorney helped me develop the diligence and persistence you need to write a novel.

I doubt twenty-five-year-old me could have written a book; I would have been hung up on getting the first chapter exactly “right” and wouldn’t have gotten anywhere. You learn how to move forward when you’re writing on a deadline (and when you’re an attorney, there are always deadlines and time constraints).

It also helped me develop a thick skin for criticism, which is great, because so much growth as a writer comes from listening to and incorporating feedback.

My WIP is about a woman who grew up in an intentional community in rural Illinois led by a charismatic former therapist.

Now, ten years later, she’s thriving professionally as an associate at an esteemed Chicago law firm. But she receives a call from her sister at work one day, informing her that the leader of the community has died, and her childhood best friend has been arrested for his murder.

She returns to her hometown to help her friend and learn the truth about what happened, and, in doing so, she is forced to confront her understanding of her childhood, her severed relationships, and the nature of the community where she grew up.

I still find it difficult to think about projects as a whole, and much easier to think about them in small pieces. Writing a whole book is daunting, but writing a section of a book is less so, and writing 500 words (my daily requirement for myself) is totally doable. Whenever I’m feeling overwhelmed or anxious about a current project, I try to focus on one of those smaller pieces, and it usually helps!

Congrats on your terrific debut! Looking forward to reading your next book! 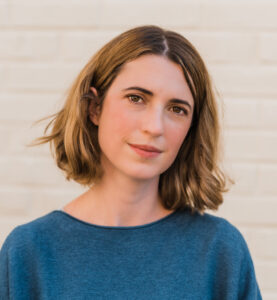 Allison Buccola is an attorney with a JD from the University of Chicago. She lives outside Philadelphia with her husband and their two young children.

To learn more about Allison, click on any of the following links:

Pursuit of the Truth: Harlequin Intrigue

Legal Thriller After the Fact by Jeff Cooper