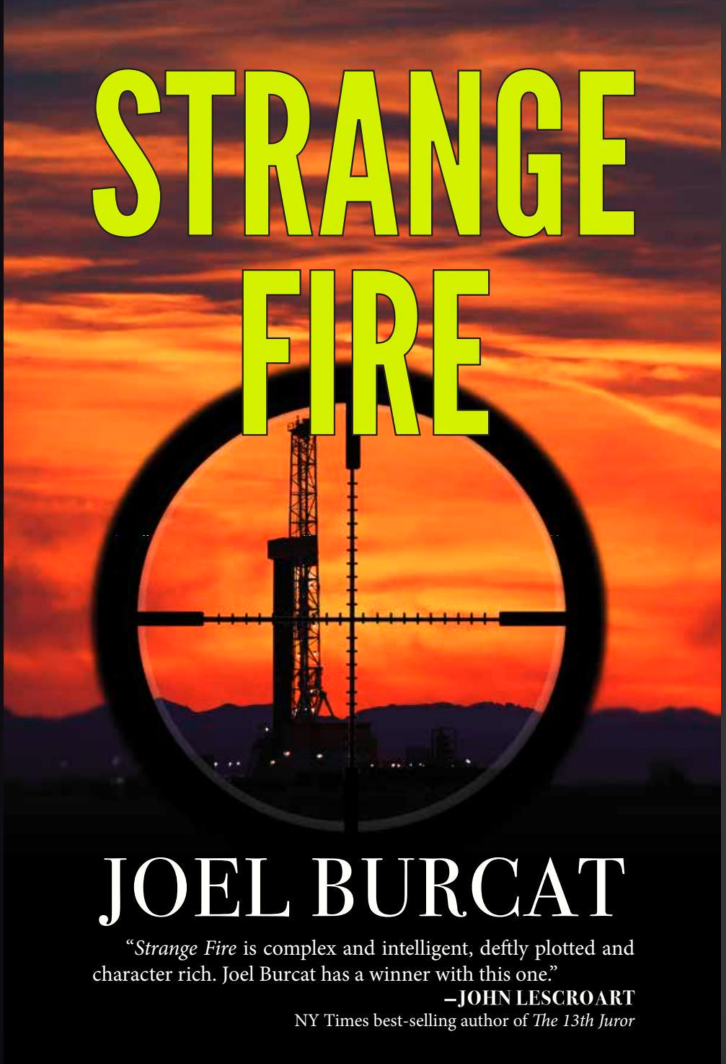 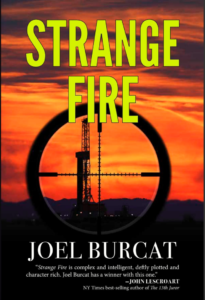 Fracking for natural gas has turned deadly in Bradford County, Pa., and not only is the water contaminated, but people are dying.

Round-the-clock operations conducted by Yukon Oil and Gas may have poisoned a residential well and threatened a town’s water supply. Who is contaminating water wells in Bradford County? Why are contractors disappearing?

“Burcat writes with an insider’s edge about a dangerous battle over fracking. Strange Fire is a dark, suspenseful read that ranges from the gas fields to the courtroom, all handled with gritty style. A treat for thriller fans.” —William Landay, NY Times best-selling author of Defending Jacob

“Writers like Burcat demonstrate that ‘within the densest fog and darkest black, you can find clarity and color if your imagination is 20-20.” —Frank Bruni, NY Times best-selling author and op-ed columnist for the New York Times

“Warning: surprising twists and turns ahead! Strange Fire is much more authentic than the usual fictional fare and is a rare legal thriller with the ability to educate as well as entertain.” —Lisa Gardner, NY Times best-selling author of Love You More and Hide

To purchase Strange Fire, click on any of the following links: Amazon & Headline Books

Strange Fire revolves around the fracking industry. What drew you to that as a topic for an eco-thriller?

I practiced environmental law for 40 plus years. During that time I handled cases involving just about every environmental issue you can imagine. My first two books dealt with some of those issues, such as illegal dumping of hazardous waste (Drink to Every Beast) and coal strip mining (Amid Rage).

Fracking became big in Pennsylvania during the last 15 years of my practice. It is controversial and people have strong feelings about it. This seemed like a natural for the third book in my Mike Jacobs series (Mike is an environmental lawyer working for Pennsylvania’s environmental agency).

For Strange Fire, I drew on my extensive expertise and a lot of issues taking place in the gas fields of Pennsylvania. While the story is not based on any particular case, it deals with a common concern—contamination of drinking water as a result of fracking activities. The story has elements that may have been reported once or twice in the gas region, but I took advantage of those reports and naturally dreamed up some things that never happened, but could have happened. It’s a great topic and I may not be done with it just yet.

Strange Fire includes a romantic element, what can you share with us about that aspect of the novel?

Mike has had a checkered past when it came to his relationships with women. While he is generally a “good guy” he has made a few terrible mistakes at love. This has formed the basis for interesting sub-plots in my previous novels. A theme running through the earlier novels is Mike’s search for love and his missteps along the way.

In Strange Fire Mike meets a woman, Missy Shelton, who is a geologist and may be the right woman for him (I don’t want to give away any spoilers). Missy has had a messy past that she has not quite dealt with. Mike helps her and they may (or may not) fall in love.

Tell us more about Mike Jacobs:

One of my reviewers on Amazon described Mike perfectly: “Mike Jacobs, is a likable character with whom the reader can easily relate. Mike is both a clever lawyer and, on a personal level, an endearingly sweet man. One simultaneously identifies with and groans at his missteps as Mike tries to satisfy his obligation to protect a dubious mining permit issued by the Pennsylvania Department of Environmental Protection. What he really wants to do is save the hapless neighbors from the harm threatened by a nefarious strip-mining operation.”

Mike is pulled in multiple directions by many things. He works for a state agency (DEP) and must defend it even when it is wrong (or he thinks it is wrong). He is looking for love and makes some terrible decisions along the road of life that have an impact on others. He has serious doubts about his faith (Mike is Jewish) and is constantly pulled in multiple directions about his devotion to his faith and abandoning it.

As an environmental attorney, how much do Mike Jacobs’ experiences resemble your own?

In 1975, Leonard Nimoy wrote a book called, I Am Not Spock. Twenty years later, in 1995, he wrote another book called, I Am Spock. He needed to explain his apparent abandonment of the Spock character. I can say I truly am not Spock. However, like Nimoy said of his signature character, there are bits and pieces of me in Mike Jacobs and vice versa.

In some regards, Mike is smarter and quicker than I am. He’s also made some awful mistakes, mistakes I have never made. I have made some mistakes and had a few victories and some of them have found their way into Mike’s character.

This is your third published novel, how has your writing changed over the three books?

I believe my writing has improved over the course of my three novels.

Now, I think I am hitting most notes precisely and not squeaking out too many flat notes. I’ve always had a good way of describing my characters and giving voice to them. While I think I was good at that before, this has improved.

I am mindful of pacing and work hard to make sure my novels move without distraction or interruption. I’ve attended quite a few writing education programs (ITW and others) and have honed my writing skills (e.g. master classes, using twists, point of view, and other courses). My writing has improved both as a result of these classes and writing lots and lots of words. So many words…

I’ve actually completed three new novels. I am editing all of them and hoping to have them published over the next year. Also, I have other books (including another Mike Jacobs installment) under way.

Lullabies and Other Lies is a gritty, post-pandemic young adult novel in which all of the adults of the world have died and only teenagers have survived. This is like Lord of the Flies meets The Road.

Little Brother is a dystopian, speculative look at the present in which the FBI is at war with a local township. It features a female protagonist with the teenage daughter from hell and a very dark side.

Finally, Temperature Rising is about a young woman law student who is mistakenly admitted into a trade association meeting where the lobbyists are plotting to eviscerate all climate change legislation. They mistake her for a young lobbyist and she becomes a spy for the New York Times.

We do have a grand-dog, Ruby.

She’s a Jack Russell mix and a little lover.

There was a time when Ruby ran so fast her feet barely touched the ground (her nick-name was Ruby the Wonder-Dog).

Now she is quite old (17-ish) and these days spends much of her time sleeping.

We still love her. 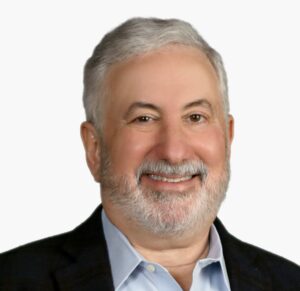 Joel Burcat is a novelist and environmental lawyer. His award-winning debut novel, DRINK TO EVERY BEAST, about midnight dumping, was the first in his series of Mike Jacobs environmental legal thrillers. His second published novel, AMID RAGE, was the next in the series and was released on February 2, 2021. It has also won several literary awards. AMID RAGE is about a war over strip coal mining.

Burcat was also the founding co-editor of two award-winning non-fiction books: PENNSYLVANIA ENVIRONMENTAL LAW AND PRACTICE (7 editions) and THE LAW OF OIL AND GAS IN PENNSYLVANIA (2 editions). Both books won top honors from the international Association of Continuing Legal Education. Both books are published by the Pennsylvania Bar Institute Press.

He is an active member of the International Thriller Writers (Chair of Thriller-Tique critique group program) and PennWriters. Burcat is a Philadelphia native and now lives in Harrisburg, Pa. with his wife, Gail. They have two grown daughters, a son-in-law and two grandchildren. When he is not writing, you may find him in his garden or on a hiking trail. He also volunteers for several charities.