Continuing my series on the Debut Authors Program from the International Thriller Writers, I had the opportunity to visit with Shaun Coen. I love that Shaun is a fellow playwright!
Shaun Coen is an award-winning playwright, columnist and feature writer. The Pot O’Gold Murder is his first novel.
The Interview
You have worked as a playwright, columnist, and feature writer. How was writing a novel different from working in those other forms?
As a novelist and a playwright you are completely in charge of your creations, whereas columns are typically opinions supported by facts (or “alternative facts”) and in writing features you allow for your subject matters and other sources to reveal the story. But it’s all storytelling, and there are similarities—you always want to make the characters, whether real or imagined, seem as believable, relatable and as “human” as possible even if they’re inhumane.
(I love that you include “human” as possible even if they’re inhumane. It’s always interesting when a writer sees people or characters as real, regardless of their behavior. Most people aren’t all good or all bad, I think it’s important to remember that.)
The Bronx comes to life in your work. How has your writing been shaped by your community?

Community always affects your writing because those are the surroundings you’re familiar with and the people you interact with on a daily basis. My community was populated with a lot of quick witted, hard working, often hard living but good hearted people. The Bronx has a special vibe, particularly the Irish enclave of Woodlawn, and I wanted to capture its essence. To the best of my knowledge, The Pot O’Gold Murder is the only book that takes place in Woodlawn and I wanted to introduce readers to the colorful characters who inhabit this unique neighborhood.
(I think I have the only mystery series set in Bellingham, WA, I totally understand wanting to capture a place most readers aren’t familiar with)
The Pot O’Gold Murder incorporates humor alongside the gritty reality of crime. Are you naturally funny or was that an aspect you had to work at? 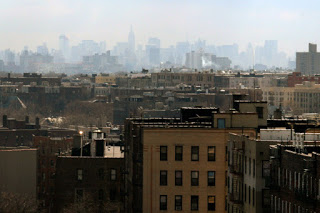 I’m the youngest of six so I learned at a very young age that if you wanted to get noticed it helped to be funny. Growing up in The Bronx, sometimes you had to be quick with a joke or your fists in order to avoid trouble. I enjoy reading humorous, fast-paced stories with well developed characters and I try to incorporate those elements into my writing especially if it serves the characters and the plot. With this novel the humor made sense and it softens the blow of the some of the horrible acts and behavior.
Tell us about your writing process…
Some days I attack the blank page in a flurry with the funniest, fiercest, most honest dialogue and storyline that my antennae receive. Unfortunately, days go by where the reception is hazy, so I cherish the days when my fingers catch up to the thoughts running amuck in my head and hopefully at some point I look over the pages amassed and think, “Well, that doesn’t suck.” Then I rewrite, edit, rewrite, edit and hope it still doesn’t suck. (We all love that “that doesn’t suck,” don’t we!)
What has been the biggest surprise so far in your first year as a debut novelist?
There’s been several: the number of people who think characters in the book are based on them; the number of people you know who truly couldn’t care less that you wrote a book and have no intention of buying it; and the nicest surprise has been hearing from complete strangers or people who you never expected to hear from again who champion the book and tell you how much they enjoyed it. There is so much content out there competing for an audience so I really appreciate those who made the effort to let me know that they were really engaged in the novel and try to spread the word.
What are you working on now?

Trying to hit the curveball. Struggling with promoting this book while working on others and working full time and raising a family and dealing with all the challenges life throws at you. But, if you want to play in the big leagues, you gotta learn to hit the curveball. (Great analogy!)
Final Words of Wisdom: Be fearless. Don’t fear rejection, it’s inevitable. Don’t let what you think other people will think enter into the writing process, be brutally honest with yourself and to your characters and let it all out. Life is messy so don’t be afraid of writing about it. People have lived through horrible things and bleaker times; they want to escape by wading through other people’s shit for awhile. Keep at it and you’ll find people who support and connect with your writing.
(Thank you, Shaun, for hanging out with me and my readers this week! Congratulations on your debut novel. Hope to meet you in person this summer at ThrillerFest!)
Don’t miss my added special interview this week – LS Hawker
LS was a previous ITW Debut Author who has just come out with her third novel!

The Perfect Title for My Upcoming Release