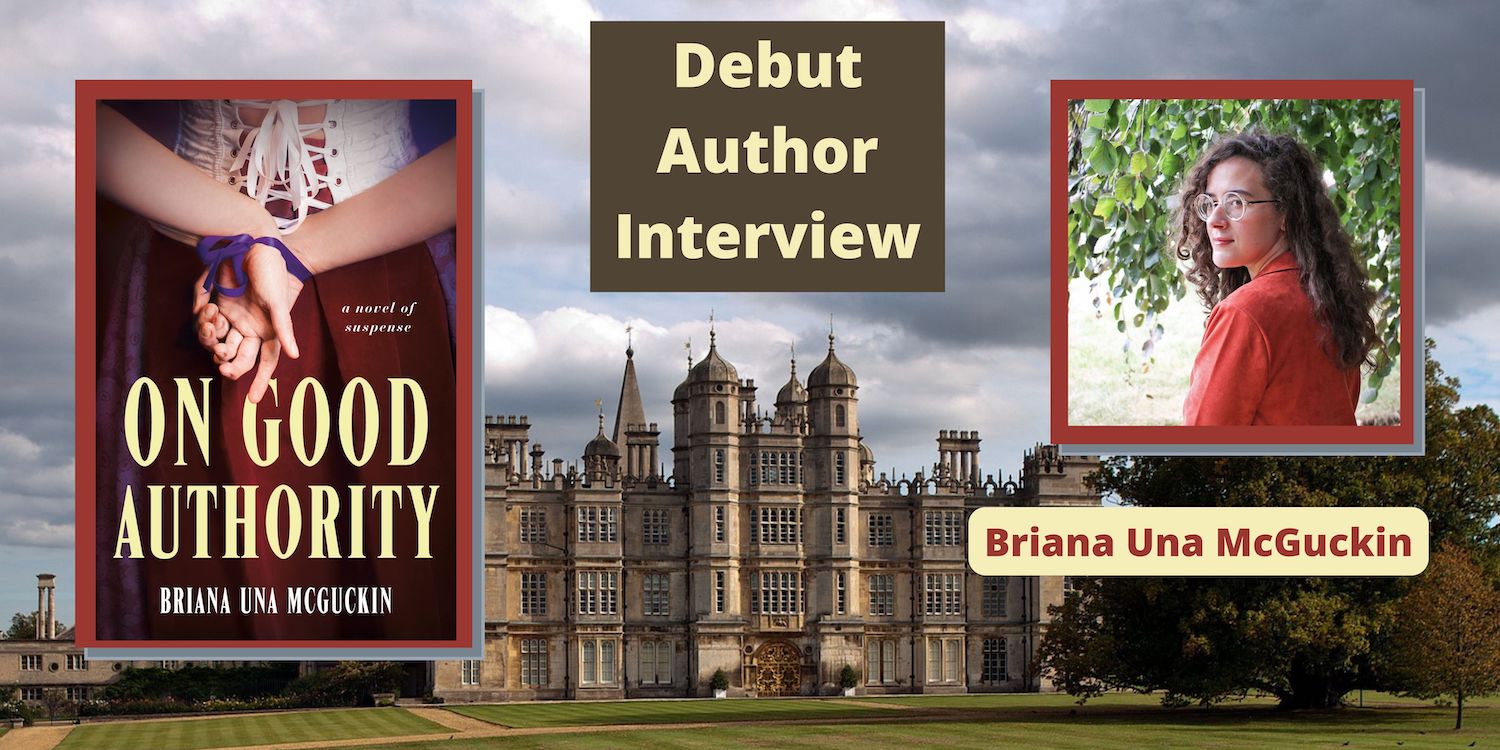 On Good Authority, a novel of Gothic suspense by Briana Una McGuckin 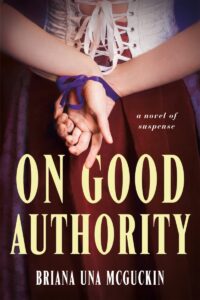 When lady’s maid Marian Osley and footman Valentine Hobbs assume their positions at the cliff-top estate of Valor Rise, they already share a history. Raised together as paupers in a London workhouse, they escaped through games of imaginary crimes and sublime punishment. Now they’ve been unexpectedly reunited—in subservience to the brooding Wythe Bornholdt and his frail wife, Diana. A master and mistress with their own dark secrets.

The line between servitude and bondage is drawn, and the dynamics of dominance and submission will shift in this sensually charged novel of Gothic suspense.

To purchase On Good Authority, click on any of the following links: Amazon, Barnes & Noble, IndieBound, Goodreads, and the River Bend Bookshop.

On Good Authority — The Interview

Tell us about the world you created for your debut novel, On Good Authority:

In part, of course, I was working in a world that was already there—that of Victorian England. But I think the lens I’m having readers look through does give a different perspective to the one we often get from that time and place.

For one, I’m focused on the servants in a manor house, and how they see the society in which the upper classes move. Their view of “above-stairs” from below is not wholly negative, either; it’s complicated, because the power of the wealthier people is tied, subtly and overtly both, to their being better people than the poor. So the servants grapple with this sense of guilt and shame as well as jealousy.

The way people dress or talk, how they fill their time—it all comes down to power, or lack thereof. I think power is a tangible part of the world of the story. Who gets to be in control at any given moment affects everything: who is allowed to commit huge transgressions and who is punished for small slip-ups, and even the kinky romantic relationship between the lady’s maid and footman in the book.

On Good Authority is Gothic Suspense. What do you love about that genre and how can readers see that reflected in the book?

Gothics are my absolute favorite for their sensuality—specifically, their sensual darkness. Gothics and Romantic Suspense stories, like Jane Eyre and Rebecca, put our dread and our desire side-by-side, and it works because we do get fascinated by the things forbidden us.

Gothic stories also tend to present us with a mismatch between the reality of the world and the perceptions of the protagonist. I’ve pulled both the Gothic sensuality and the Gothic self-doubt into On Good Authority. Marian, our heroine, is coming of age as a kinky person in an era when nobody respectable talks about sex, let alone weird sex; her desires are mysterious to her, as dangerous as they are compelling.

And then, when her employer, Mr. Bornholdt, tries to take advantage of her submissive inclination, that trauma muddies her sense of self even more.

There’s an old manor in the story, of course, but the most haunted place of all is Marian’s mind, caught between what she wants in her heart (from Valentine, not Bornholdt) and the worry that she’s sick somehow.

What would you like readers to know about Marian Osley and Valentine Hobbs?

Describe your publishing journey for On Good Authority?

Oh, we went through everything together! On Good Authority was my thesis novel when I got my MFA from Western Connecticut State University. I started querying agents at the end of my final semester, and was rejected a little over 100 times over six months.

Then the manuscript got accepted into the Pitch Wars mentorship program, and I had the great privilege of revising the manuscript under Elizabeth Little, who was wonderful and so wise. Her confidence in the story, her belief in it, meant everything to me. She really put me in my place about what a rejection means: nothing.

Or, next to nothing.

It means this one person didn’t like this work, or didn’t know how to sell it. That helped me to hold on to the knowledge that I had made something important, and to have the tenacity and patience to seek out someone else who could see that.

My agent, Chris Bucci, snapped up On Good Authority from the Pitch Wars Showcase. Then there were lots of passes from publishers who didn’t know what to do with the manuscript; they liked the writing, but they didn’t know how to market the story, or they were nervous about the kinky aspects.

In August, Jessica Tribble Wells, who would become my editor, read it in I think 2 days and jumped on it. So, a year and a half after I’d started querying, I had a book deal. It sounds short when I put it like that, but it didn’t feel short. It was excruciating, exhausting—I nearly gave up so many times. Querying is hard. I’d love more opportunities to help people through that lonely patch of publishing…

As things spring up to replace Pitch Wars (which has ended since I did it), I really want to help people as I was helped.

You have spastic diplegic cerebral palsy, what has that meant for your life and your writing?

I wouldn’t be a writer without it. I had corrective surgeries when I was ten and eleven, but before that I walked on my toes, because my heel cords were too tight to let my heels touch the floor. Because I couldn’t straighten my legs (tight hamstrings!), I walked with my knees turned in, so they could lean on each other and bear my weight. Running was awkward. Even walking was awkward. I fell down a lot. I still do, actually. Balance, weight-bearing, picking up my feet when I walk—all things I struggle with, though the surgeries did improve my gait.

All of that to say, physical play was more stressful for me than fun as a kid—especially because, from a young age, there were physical therapists in the house making me play games that were actually just exercises; that was often uncomfortable and frustrating. So, I started writing when I was young because it was easier to play in my mind than in my body. And, because it brought me joy, I kept going back to the page and trying again.

I’m so glad. I love being this person; I wouldn’t change me. If I wish for anything, it’s that we had more stylish kneepads. You know, like options for evening wear or a chic brunch. It’d save me some bruises.

Another Romantic Suspense set in the 19th century, this time in Dublin, Ireland.

A young woman trying to escape the world of prostitution poses as a man in order to get into Trinity College. As part of her scholarship, she is made live-in servant to a professor there. She lives in fear of his discovering her—figuring he’d demand her body in return for keeping her secret, if he knew. Of course, he does find out, but his reaction is not at all what she expects…

So begins a relationship that could ruin both their lives—or, perhaps, set them free.

It’s a story about the repressive attitudes around sexuality (and women’s rights) at the time, but it’s also got a lot to do with gender identity, and how we’re (I hope) finally starting to break down the limiting gender boxes we put ourselves in, now. I’m not just writing to depict how things were then, in other words; I also want to suggest something about how things could and should be.

You should try, try, try to hold off critiquing the first draft until after you actually finish the first draft. I think of it like this: the first draft is you getting all the stuff you want to look at under a microscope, and revision is adjusting the lens to bring it into better focus.

If you start fiddling with the lens before you’ve got your slides done, sure, you can focus, but what are you focusing on? You won’t know how to do that work until the story is out of you, on the slides (pages). Trust that you can and will do the work when it’s time, and wait.

This is Starman. Believe it or not, he’s part St. Bernard.

We’re not sure what part.

Probably the heart, because his is so big.

Briana Una McGuckin has cerebral palsy, a perhaps concerningly large collection of perfume oils, and a fascination with all things Victorian.