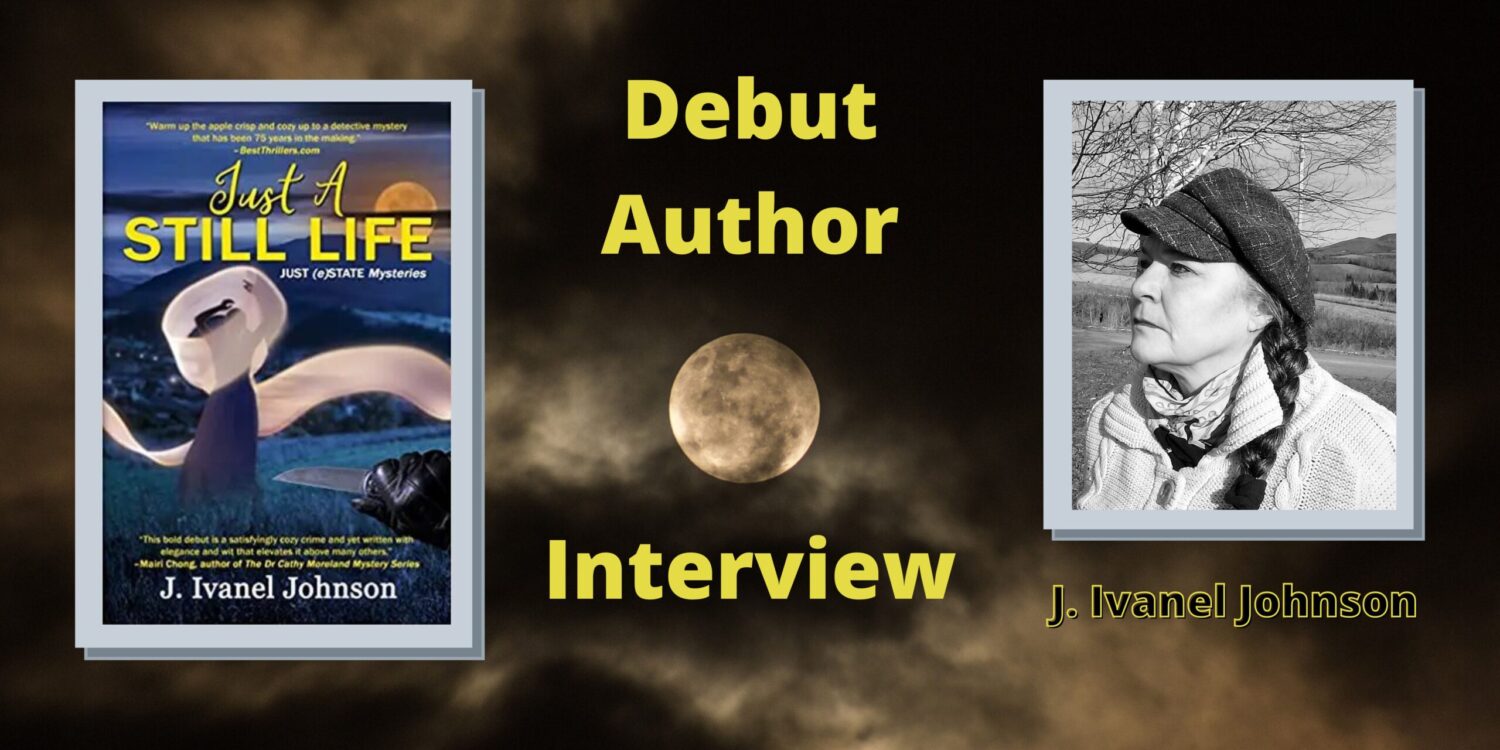 In the simpler times of 1971, Inspector Philip Steele, recently transferred to Fredericton, takes a well-deserved holiday visiting his beloved, elderly godmother in her quaint village nestled in the gently-rolling Appalachians of Atlantic Canada.

But when a bank robbery and the murder of a teenage boy initiate a string of even more shocking events which wreak panic in the quiet community, Phil must return to long days of investigation with his oft-misquoting, black sergeant Zareb Woodbridge, who struggles with questioning some of the more racist locals.

While Phil’s godmother, P.J., secretly prepares her annual Harvest Moon Ritual to be used as a trap for the murderer, he himself has fallen in love with the accused: watercolorist Beth Grimball, enjoying new-found ‘freedom’ albeit in a jail cell. Phil finds he is not only urgently compelled to solve the crimes because it’s his job, but to save the lives of those he has always loved. And those he has just begun to.

To purchase Just A STILL LIFE, click on the following link: Amazon

Just a STILL LIFE is set in 1971. What drew you to that time period for your debut novel?

As explained in my bio., my grandmother originally drafted this in 1947, set then. I told her I’d someday rewrite and ‘update’ it, but wanted to keep the simplicity (no high-tech stuff, most of which I don’t use and can’t abide, including cell phones!)

The sequels to this book, all part of the Just (e)State mysteries, are actually prequels going back two years each. Thus, the next book, Just A STALE MATE is set in 1969.

Tell us about the fictional village of Victoria, where Just a STILL LIFE is set:

The original manuscript my grandmother whipped up was set in “Straffordville”, the village in Ontario where we both grew up. Well, I was actually two miles out of the village on a small rural ‘estate’, thus the title of the series, interestingly an anagram for Astute Jest, rather a running theme through the series. But I still understood very well how villages/small towns function – often with copious amounts of gossip salted with racism and bullying, all stemming from boredom and ignorance.

When we moved to New Brunswick six years ago I wanted to change the setting to this province, give it more exposure in the literary world because Ontario already has quite a bit of that. So I reinvented our original flat-lands village, plunked it in the rolling mountains and called it Victoria, my grandmother first name. But I also liked the name because we live in Victoria County and it suggests an old-fashioned, more genteel time, doesn’t it?

What should readers know about Philip Steele?

Philip, in this book, is exhausted and tired of his job as a homicide consultant travelling to, and living in, remote areas of Canada.

I actually like the way the reviewer for BestThrillers.com described him: “Philip has been checked out emotionally for some time. He lost his fiancée years ago in a shooting, and is now grappling with his mother’s recent passing and the sale of the family farm that had been in existence for five generations. But his elderly godmother, Polly Jane (P.J.), who runs the quaint town post office out of the front of her house, is determined to help resuscitate him and put an end to Philip’s bachelor ways.”

However, I love some of my other characters more than Phil, I think. For instance, he has a young Black sergeant who is a former journalist/English major. Woody is always misquoting passages he thinks are relevant while he struggles with racism when questioning inhabitants of the small mountain village. And the town doctor – a bit of a grump with a sweet tooth that nearly kills him. And Carol Caribou, a quiet Wolastoqiyik First Nations girl who comes to help P.J. in the post office and ends up hearing clues to the murderer.

In addition to writing fiction, you also work as a playwright. Tell us about your work for the stage:

Oh, thanks for asking, Elena – Theatre has always been important to me and I majored in English/Drama at Brock and then Queens Universities, then got my B.Ed. from Queens with a specialist: “Artist in Community Education”, allowing me extra exposure and knowledge to teach the performing arts in underprivileged schools in 4 different countries.

Prior to that, I was a struggling actress – just messing about on small stages from the western United States through to Stratford, ON and in Leeds/Bradford, UK. Mostly getting paid to be “Rainbow the Clown” and “Cherie the (Chubby) French Maid” at parties with distinctly different age groups and intentions!

But though I was always small-stuff,  I’m now proud to have two students currently working in UK  film/television,  and one musical theatre actress working off-Broadway in NYC (as well as a former drama student who is now a successful poet/lyricist in his own right!)

Two of my co-written shows have been produced: Off The Wall, with Phil Chester, in Leeds and Fanta-Seas, with R. Hodgson in Montana.

In 2018 two of my songs were performed at the 150 Voices for 150 Years concert in New Brunswick. The 2nd edition (hardcover) of my only non-fiction, “How To Teach Drama To Kids” came out in Feb. 2020 and my full-length historical stage musical “Rough Notes” is currently in development, winning a 2022 Canada Council for the Arts grant of $20,000. to be professionally workshopped in October.

So with the debut novel and this, it’s been an incredibly busy year! I’m so excited to have some great performers coming in to our rural area for this, including an old uni friend of mine, who was a regular on Schitt’s Creek.

Rough Notes is on the new Canadian Musical Theatre Database or you can find more details on the musical’s site (click here).  Because I love writing and promoting culturally-diverse characters, often from marginalized communities, I’m sharing this article which just came out this week. It talks about the characters in Just A STILL LIFE as well as in Rough Notes:

We are both horse people. Tell readers about your long history with horses:

From the time I was 10 until my mid-40s when my disability (spondylolisthesis as well as crippled ankles and knees from too many falls) caught up with me, I’ve ridden and coached. I became an internationally certified instructor of both disabled and able-bodied students and took some of them (and some superb rescue horses!) to the Junior Olympic/Young Rider levels of eventing, or horse trials.

I loved the huge challenge of teaching and competing myself in all three disciplines – dressage, cross-country and show-jumping. You had to be good at all 3, and when competing it was just you and your partner, your horse, trying to better your scores from last time. That’s the only kind of competing I’ve ever liked.

My first husband and I ran a riding stable for a decade in the Ottawa Valley, called Goldcreek Farm, so named because many of our mounts – and then almost every animal we owned, even in the petting farm! – had either a gold colour, or gold names, or both. “Go for Gold!”, that was our motto, naturally.  That’s why I noticed you had a palomino, Elena; I’ve been in love with them since I had Circle X Ranch as a kid!

Me too! I do love a beautiful palomino!

I have written a full-length creative non-fiction about that time period at Goldcreek, called “Green Broke”.

One of the chapters in it, about having an argument with Princess Anne’s husband Mark Phillips, was turned into the short story “Iron Bone” which appears in the anthology Nothing Without Us.

I always felt ‘broken’/run-down/feeble… and that’s why I loved saving rescue animals and giving them a second chance as well. That buckskin in the photo, Harvest Gold, was bought cheap from a dealer. He was next to be put on the meat truck. And after some retraining, Harvey took me to the provincial championships and some of my students rode him in their exams to become certified riding instructors themselves!

It’s a good life message for all of us, I think. Very symbolic.

I just finished the sequel/prequel to Just A STILL LIFE, called Just A STALE MATE. It’s been with a few Beta-readers and is currently in a stack on my publisher’s desk, but I’ve been told it’s more sophisticated than this first one – less murders, but harder to pick up on clues, or to figure out the motive/murderer. It also has some chapters that include therapeutic riding, or riding for the disabled, in this one. And my musical Rough Notes, which I’m constantly revising and working on in some way, is about the literary arts as well as protecting the environment. So you see – I’m always going back to those 4 passions I had even as a young kid!

Simple. Never, ever, ever give up.  Do the suggested edits, cry over the rejections, try new tactics and ideas, put it all aside (for decades if you have to, like me!) But don’t give up. My grandmother only tried the one time to get published.  I’ve done the opposite –  tried 7 manuscripts and 54 short stories, poems and plays,  in and out of circulation with agents and publishers, for over 40 years. And yeah, just this year – my debut novel.

Great advice! And congratulations on the debut (and all your other projects)! 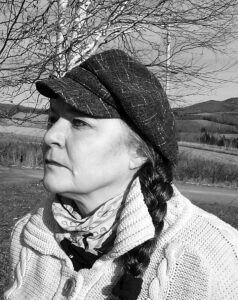 Ivanel Johnson is the pen name for a disabled author who now lives in the Appalachians of New Brunswick, where she and her husband and mother try to manage self-sufficiently on their small farm overlooking inspirational views of nature. Striving always to write about marginalized and culturally-diverse characters, many based on people from the First Nation reservations or inner cities where she has taught, her imagination nonetheless has most soared whilst living “Out and Up” – previously in the highlands of Scotland, the moors of Yorkshire, and the Rockies of Montana and the Yukon.

Her nom de plume originates with her paternal grandmother, “Victoria Ivanel Johnson”, who wrote novels her entire life – mostly romantic mysteries — but only tried once to get published and when she was told to add more ‘boudoir scenes’, she vowed to write only for herself and her family from that point on.

She began drafting “Prison Is A Private Place” in 1947. As she lay dying in 1992, her granddaughter vowed to her that she would write and revise it until it was updated and publishable. That has taken another 30 years and thus — 75 years after it was first conceived, it is today published as Just A STILL LIFE. And, quite by coincidence, it is being released on the author’s grandmother’s birthday.

Header image from Pexels on Pixabay

Murder at the Wedding: New Cozy