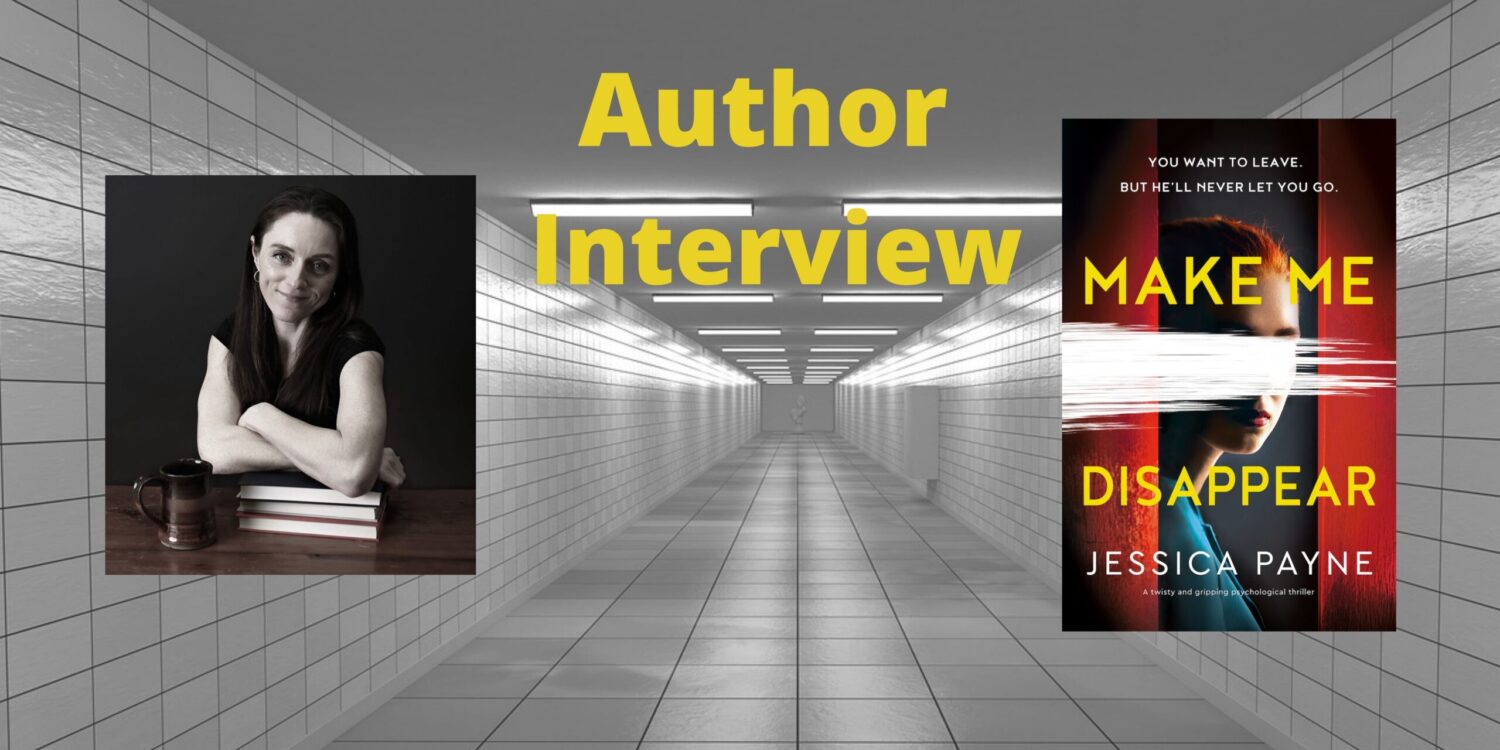 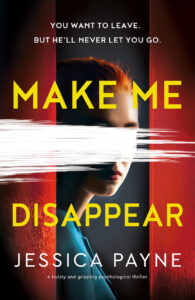 Dr Daniel Ashcroft was perfect: handsome, romantic, protective. I thought I was so lucky.

But then I heard the rumors about his previous girlfriend, that she had vanished without a trace.That’s when I found the cameras in my apartment.

I was trapped. Daniel made it clear I couldn’t leave him, not without risking everyone I loved. I had to disappear, so I arranged my own kidnapping.

I should have known Daniel would never let me get away that easily. But he could never have predicted what I’d do next…

Make Me Disappear is a brilliantly twisty psychological thriller guaranteed to keep you up all night. Fans of The Wife Between Us, Gone Girl and The Couple Next Door will find it impossible to put down.

To purchase Make Me Disappear, click on any of the following links: Amazon, Barnes & Noble, and IndieBound

Mark Want to Read on Goodreads!

Make Me Disappear—your debut novel—is psychological suspense. I love that genre, but it’s hard to get both twisty plots and well-developed characters. What did you find to be a challenge with developing the story? What came more easily?

The biggest challenge for me—and this was my first psychological suspense/thriller book I’d written—was making sure all the plot threads wove together seamlessly.

One of my favorite parts of this genre is that lightbulb moment at the end, where you can see how the subplots affected the main plot, how A led to B led to C. Where you look back and think oh my gosh, how didn’t I see this twist coming? To pull that off felt like a huge achievement that truly made me believe the quote good writing is rewriting (or something like that!).

The easier part was the characters for me. Noelle, the main character, is someone who’s been bouncing around in my head for a while—this young woman, a nurse in Seattle, trapped in a bad relationship. Her voice was one I had been waiting to share.

The other point-of-view, Daniel, her sociopathic, narcissistic boyfriend, came easily, too.

I didn’t start this book knowing it would be dual POV, or knowing Daniel’s voice at all. But I sat down and started writing and it was like he was just there, waiting for me—his evil delight and all. I really wanted him to be one of those characters you hate how much you love (like Dexter or Joe Goldberg from YOU). The combination of her honest, sweet, but determined demeanor with his dark, twisted, sociopathic one, made quite the equation for a psychological suspense.

What would you like readers to know about Noelle? The protagonist in Make Me Disappear?

Well, one important aspect of Noelle is that she is a pretty typical twenty-something—new in town, working as an RN to pay her rent, a love of running in the mountains and near the Puget Sound—she could be any of us at that point in our lives. She met a great guy—a handsome, charming doctor—anyone would be over the moon.

But things are not always as they seem. What happens behind closed doors can be very different than what we see on the surface. I tried to show how bad relationships don’t start all at once. It’s not like you go on a first date and the person has a sign on their head saying Bad News. These toxic relationships are often much stealthier, and Noelle, like so many women, doesn’t realize how bad it’s gotten until she’s too deep to escape.

Thus, why she realized her only option was to arrange for her own kidnapping. It’s too bad things did not go as planned.

Make Me Disappear was the fourth book I sent out to agents, and it got an incredible response. I signed with my agent, Kimberly Brower, in February of 2021. We spent a few months revising Make Me Disappear, then went on submission to publishers in summer. Kelsie Marsden, my editor, offered on Make Me Disappear pretty quickly—it was quite exciting.

We made our decision and accepted her offer, and things haven’t slowed down since. I signed a two-book deal, so I have another book coming out later this year!

What question would you like to be asked about your debut novel or the process to publication that you haven’t gotten yet?

Long after I finished writing Make Me Disappear, while revising a passage that included two male characters’ names, I realized I had used the name Jack and Daniel for main characters… you know, as in Jack Daniels, the whiskey. I keep waiting for someone to ask if this was on purpose, and no one ever has! (and no, it was not at all on purpose 🙂).

We both live in the Pacific Northwest after growing up elsewhere. What drew you to this part of Washington State?

When I was in my early twenties, I spent six months working on a backcountry trails crew in the Sierra Nevadas in California.

After growing up in Kansas City, it was quite the change of scenery. I realized I was much happier somewhere with mountains and water and made it a goal to make the move permanent to the west coast. After I finished nursing school a few years later, I applied for jobs up and down the coast, but immediately received two offers at different hospitals in Tacoma, Washington—it seemed like a sign that was where I was meant to go!

And I’m so glad I did. Seeing the Puget Sound every day is amazing. Seeing Mt. Rainier off in the distance is a breath of fresh air. I love the mountains, the water, the tall trees, the rainy days. I feel like this is where I’m supposed to be.

I’m deep in edits for book 2, tentatively titled TOO CLOSE FOR COMFORT.

World champion MMA coach Norah Silverton worked hard to become one of the most dangerous woman in the world. And who can blame her, after she escaped a serial killer at the age of seventeen. It’s a decade later, and when her estranged father dies, she must return to her hometown, facing not only her past, but the knowledge the full story of how she survived said serial killer has been published for all to read. But when she arrives, she soon realizes she’s not there to bury the father whose love she was never worthy of—she’s there to face the serial killer she tricked into letting her go so long ago.

I’m also working on a co-written project in a different genre, which has been so much fun! Co-writing with a writing friend and critique partner is so different, but I’m learning a lot. And trying out another genre has let me flex some writing muscles in new ways.

Keep writing, of course. And keep learning, too. The advice to just keep writing will only take you so far—read what you want to be writing.

Observe and take in how other authors have done it. Take a class. Read a craft book. Keep writing, because that’s how you’ll get better, but also actively try to get better.

Also, honest feedback. Find a critique partner who isn’t related to you. Who is okay telling you when they think something can be improved. I genuinely don’t think I’d be a published author without my group of critique partners.

Maggy—As chill as can be. Loves belly rubs and apples.

Frankie—pretty sure he was meant to be a model.

In the meantime, he enjoys sitting in front of the fireplace and staring at you until you pet him.

Quoted as saying: When you’re a cat, the whole world is your catwalk.

Lil’st Kitty—also known as my writing cat. Will wake me up every day at 4:30am to make sure I get my words in.

Also, thinks she is a bird and chirps like one constantly. 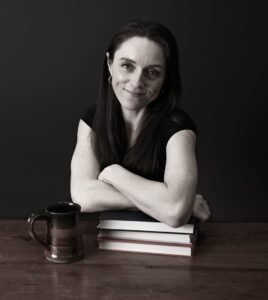 Jessica grew up in Kansas City, later moving to the Pacific Northwest where the mountains and Puget Sound became home.

Beyond writing, she loves to run, rock climb, and explore the great outdoors with her daughter and husband.

She is also an RN. When holding still, which isn’t often, you’ll find a book in her hand and a cat or dog in her lap. Jessica writes suspense and thriller and is the host of #MomsWritersClub on Twitter and YouTube.