Catalyst Press — Change can be gradual, a slight shift that over time becomes a huge movement. Or it can be quick, a frenetic burst that suddenly makes everything new. But it all begins in the same way—with a spark, a catalyst.

Don’t miss any posts on publishing. Click the link here.

Catalyst Press was founded in 2017 as a literary spark, bringing voices from around the globe to readers everywhere. We publish books that reveal the world from different perspectives and different understandings. Publishing literary fiction, graphic novels, memoir, travel, crime fiction, science, and books for young readers, our authors explore lives, stories, and places in ways that make our global community feel more connected. Change can happen in lots of ways, but we think it begins one page at a time.

The Interview with Catalyst Press

Tell us about the origin and mission of Catalyst Press:

AJ: Catalyst was founded in 2017 by Jessica, who is a writer, editor, and, until recently, an editor at Cinco Puntos Press. She has a background in African history, teaching it at several universities. She’d been reading all of these amazing African authors who hadn’t been published in the US yet, and Catalyst was the result of wanting to bring those stories to a wider readership.

What genres/categories do you publish? 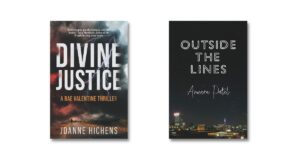 JLP: We publish across all age groups including children’s and middle grade, young adult and adult books. We have published almost 40 titles, including literary fiction, graphic novels, memoir, travel, crime, and illustrated and chapter books for kids.

But since this blog is particularly interested in crime, we want to emphasize that we do have an African crime imprint— the African Crime Reads Series.

So far, our crime novels have focused on southern Africa but we’d love to expand from there. A couple favorites include Outside the Lines by Ameera Patel, a crime novel set in Johannesburg, which explores the overlapping connections between families of African, Indian, and European cultures after a young white woman disappears; and Divine Justice: A Rae Valentine Mystery by Joanne Hichens, which explores missing diamonds and the rise of a white supremacist religious organization, in a female-authored story about a female detective, both facts unusual in the world of crime books.

Tell us about the imprints, Story Press Africa and Powers Squared:

JLP: Story Press Africa is a collaboration with Jive Media in Pietermaritzburg, South Africa, with a global mission to tell African stories from an African perspective. PowersSquared is an imprint created with my (Jessica’s) brother Matt, with a particular interest in narratives around science subjects, to sort of “humanize” science.

Introduce us to your team members:

Ashawnta: One of the things that makes this team unusual (less so these days, of course), but our three core team members are all spread out all over the globe. We’ve always been a remote-first company, and so we’re all rarely in the same physical space at the same time. Despite that, we’ve managed to become our own little community, something that I think lots of indie publishers can relate to. It’s an all-hands-on-deck situation for every book because we’re so small. But our size also makes us special, and makes the work special. Nothing is happening at Catalyst that someone has worried over, deeply cared about, or championed in some way. That’s something that you won’t see in our bios.

Jessica has a clear vision of what she wants to see Catalyst become, but is always open to suggestions, improvements, and ways that all of our voices can be heard. SarahBelle is the go-gettingest go-getter I’ve ever met. She’s always eager to learn, she has great ideas, and in just the first few months she was with us, she got us into shape as far as processes, administration, and organization. She’s been expanding her role more recently, and is already excelling at it.

The other things that our bios might not show completely is how many irons each of us has in the fire. Both Jessica and SarahBelle are writers, editors, and publicists in addition to the work they do at Catalyst, and I’m also in awe of how they find the time to do it all!

SarahBelle Selig is our South African office head, where she liaises with our local authors, booksellers and distributors, and she’s also helping out with publicity in North America. She’s a North Carolina native based in Cape Town with her partner, and recently wrapped up her MFA in Creative Writing at the University of Cape Town.

Jessica Powers is publisher, founder, and editor. She is a young adult writer (www.jlpowers.net), formerly an editor and director of foreign rights for Cinco Puntos Press (www.cincopuntos.com), and now owns and operates Catalyst Press. She lives in El Paso, Texas with her son and their little 3-legged miniature blue heeler.

Ashawnta Jackson is Catalyst’s marketing and publicity manager, and lives in Brooklyn, New York with her husband, his three giant basses (the instruments, not the fish), and their record collection. She’s also a freelance writer (https://www.heyjackson.net/), and has written for NPR, Artsy, Bandcamp, and CrimeReads, among others.

Your submission process is on your website but describe for writers what that process is like. How do you make decisions about working with an author and what can an author anticipate if they sign with Catalyst Press?

JLP: We have a reading period during the North American summer (June-August) and try to make our decisions during that time, as a team.

Ultimately, I’m responsible for making the call as to whether a book is published or not, but we all try to weigh in. We try to commit to books that we love, that we believe are important and challenging for the world, that are dynamic in voice and style and plot, and which, currently, are either set in Africa and written by an author with a longstanding connection to the continent, or authored by an African writer.

We may expand to include voices from other parts of the globe but we distinctly want to see voices from outside of the United States featured in our catalog.

When an author signs with Catalyst, they can expect to be one of 5-8 books in a calendar year (at least, as of 2022). Every book is, to us, as important as any other, and receives dedicated publicity and marketing support, access to all of us, and devotion to the book’s success–as best as we can do.

These have been challenging times for everyone, and independent presses have struggled, how have you managed during these difficult times?

JLP: By taking it one day at a time! 2021 actually was our best year yet, in terms of sales. And in 2022, it’s been our best year in terms of awards and publicity. That doesn’t mean it isn’t a challenge but we remain hopeful and optimistic.

What are the long-term goals for Catalyst Press?

JLP: Long-term goals are to become known as the go-to press for great African writing, and to expand but sustainably. Also, in particular, there is a dearth of children’s books by African writers, and we’d like to be part of that change. Children’s writing on the continent is still plagued by a lot of moralizing or religious content. Hopefully, we can find ways to encourage more nuance. Finally, we’ve been publishing more African graphic novels, and we’d like to see that both grow and be sustainable.

AJ: We’re also really proud of our #ReadingAfrica initiative, which is a social media campaign we launched in 2017 to celebrate the diversity of African literature. It’s been something that has helped raise our profile, but also something that has allowed us to share some great books and host events to spotlight some of these authors. One event that The Mystery of Writing readers might be interested in is this roundtable discussion with African crime writers. Currently, we only do a big #ReadingAfrica celebration once a year, but in the long-term, we’d like to make it a year-round initiative.

Outside of the books you publish, what are some of the staff’s favorite books?

SB: I’ve been on a sci-fi/fantasy bent lately, reading the likes of S.A. Chakraborty, Tomi Adeyemi, Lauren Beukes, N.K. Jemisin, Naomi Novik. I’m brand new to the genre, so it feels like a whole new world (and I’ll take any recommendations I can get). Besides that, I will read anything by Sally Andrew, Tana French, Ruth Ware, or Sarah Ladipo Manyika, and I pledge to read every word Lucia Berlin ever wrote.

JLP: I’m a sucker for middle-grade children’s books and also graphic novels. And I’m a big big fan of crime novels, which is why we started the crime imprint to begin with.

AJ: When it’s not a Catalyst book, lately I’ve mostly been reading non-fiction, and mostly about music history because of my non-Catalyst work. As for fiction, it’s actually shocking how long it’s been since I’ve read a novel unconnected to work. I should do something about that. But some of my favorite books are The Fire Next Time by James Baldwin, Drinking Coffee Elsewhere by ZZ Packer (which is everything I want in fiction, honestly, and is a huge influence on my own writing). I have Hanif Abdurraqib’s A Little Devil in America on deck. I love his work, and am looking forward to digging into it this summer.

Story Press Africa, an imprint of Catalyst Press (USA) and Jive Media Africa (South Africa) is a collaborative platform for sharing African knowledge. Launched with our flagship African Graphic Novel Series, Story Press Africa publishes graphic novels and comics. These are authentic, challenging and frequently controversial visions of the continent that birthed humankind— created by Africans about Africa for a global audience. Story Press Africa has its own logo and website, www.storypressafrica.com.

Powers Squared marries science and story with an eye towards bringing global voices closer to home. In the same way that historical fiction has often introduced the public to past worlds and the important events of the period, we publish books in a kaleidoscope of color to illuminate the stories inside, outside, and upside down that make up the scientific world. Matthew Powers serves as the imprint’s chief editor.

Thank you for sharing your work with my readers!

LS Hawker talks about Writing, Publishing, and the beauty of Kansas

A Writer’s Room on a Sunny Day: Catastrophic Thinking and Death