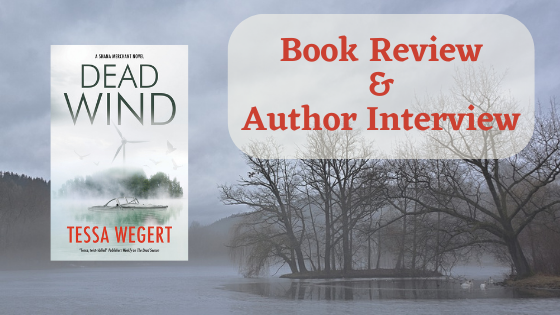 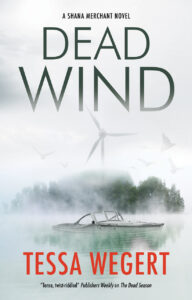 Senior Investigator Shana Merchant must dredge up dark secrets and old grudges if she’s to solve the murder of a prominent local citizen in the Thousand Islands community she now calls home.

The body is discovered on Wolfe Island, under the shadow of an enormous wind turbine. Senior Investigator Shana Merchant, arriving on the scene with fellow investigator Tim Wellington, can’t shake the feeling that she knows the victim – and the subsequent identification sends shockwaves through their community in the Thousand Islands of Upstate New York.

Politics, power, passion . . . there are dark undercurrents in Shana’s new home, and finding the killer means dredging up her new friends and neighbors’ old grudges and long-kept secrets.

That is, if the killer is from the community at all. For Shana’s keeping a terrible secret of her own: eighteen months ago she escaped from serial killer Blake Bram’s clutches. But has he followed her . . . to kill again?

The Shana Merchant novels are a brilliant blend of chilling psychological thriller and gripping police procedural, set in an atmospheric island community with a small-town vibe.

To purchase Dead Wind, click on any of the following links: Amazon, Barnes & Noble & IndieBound

My Thoughts on Dead Wind

Dead Wind seamlessly blends elements from the mystery, suspense, and thriller genres into a tightly-woven plot filled with dynamic characters.

Readers will be enthralled by Dead Wind regardless of whether this is their first Shana Merchant Novel or not. Wegert expertly drops enough backstory into Dead Wind to provide information for new readers, while simultaneously keeping the material fresh for those who have read the first two.

When a homicide victim turns up on isolated Wolfe Island, Shana Merchant has to wonder if the murder relates to the giant wind turbine looming over the corpse. “The wind turbine rose from the earth like a skeletal arm with three fingers outstretched.”

Is the location of the dead body an environmental message? Or did the killer use the location to throw Shana and fellow detective Tim Wellington off their scent? More chilling, is this the work of the fugitive the two have been trying to find? Wellington is convinced it is. “‘If this death is Bram’s doing, it has a purpose. Trey’s abduction was Bram proving he could infiltrate your life here. Daring you to come after him.'”

But Shana Merchant doesn’t scare easily, and once on the hunt, she’s not going to give up just because her prey is also a predator.

The Thousand Island region Shana Merchant now calls home provides a tense backdrop for the investigation. The insular community and rugged landscape combine to create an almost claustrophobic, locked-door feel. The killer is able to slip between islands or hide amongst the locals. Is the perpetrator a townsperson? Or just good at blending in?

Equally balanced between murder investigation and personal conflicts, Dead Wind is the kind of novel you race to finish, but never want to end. Luckily for readers, the fourth Shana Merchant novel is in the works. And if you race through Dead Wind and haven’t read the first two, it will have you scrambling back to the bookstore or clicking on the download to catch up.

A well-paced, beautifully crafted addition to crime fiction, Wegert’s third novel cements her position as a top notch mystery writer not to be missed.

Dead Wind is the third book in the Shana Merchant series. Can this be read as a standalone or should readers start with book one? Anything readers should know about the first two if they dive in with this one?

Dead Wind can definitely be read as a standalone, but I think readers will get more out of it if they start at the beginning of the series.

There are some sizeable twists and surprises along the way that are best experienced in order. My hope is that wherever readers start, they’ll want to follow Shana on her next case.

Tell us about Shana Merchant:

Shana’s a senior investigator with the Bureau of Criminal Investigation in Northern New York. She left the NYPD and moved to the Thousand Islands to distance herself from the trauma of an abduction experience, but once there, she discovered that her seemingly peaceful new home has its share of violent crime.

She knows the serial murderer who held her captive back in New York has followed her upstate. When a homicide victim with ties to Shana’s new town is discovered on a wind farm across the border in Canada, she fears the killer from her past is to blame.

The Thousand Islands community is fascinating. What made you choose that location for Dead Wind?

I’d been visiting the Thousand Islands every summer for close to twenty years, so its familiarity was part of the appeal, but it also happens to be an ideal setting for a crime series.

With its remote and rugged islands, its history as a playground for America’s elite, and the interesting dichotomy between the year-round locals and the “summer people,” there’s a lot of fodder there for a murder mystery.

Dead Wind combines police procedure with psychological suspense and a dash of thriller. What’s your writing process like to achieve such a perfect blend?

I do make a conscious effort to write books that bridge all of those genres, but the elements of each emerge at different stages of the writing process.

Police procedure factors in early on and often helps to shape the story, and the same is true of psychological elements like emotional trauma and moral conflict, but the mounting suspense and fast pacing that are crucial to a thriller don’t really come together until the third or fourth revision.

I always find myself cutting superfluous scenes and dead weight-words, even at the eleventh hour.

How did your background as a journalist help or hinder your shift to novelist?

I didn’t expect my background in journalism and freelance writing to be as useful as it’s been, but I think all those years of working on tight deadlines and incorporating feedback from editors and clients have made me both a more practical and more efficient writer.

I’m okay with slashing chapters if it benefits the story, and I edit as I go, which saves time in the long run. Since my books require quite a lot of research into crime scene investigation, my interview experience has come in handy, too.

I just turned in the fourth Shana Merchant book, so I’m using the time before I start in on revisions to finish a standalone thriller that I’ve been writing on and off since last summer. It’s a little different from the Shana books, but it does feature a female detective. I’m enjoying watching a new lead character evolve and find her footing.

Get involved in the writing community as soon as you can, ideally before you’re published.

Look for opportunities to join writing organizations, cultivate relationships with your peers, read and review other authors’ books, and boost your fellow debuts online. There’s nothing like receiving support from your fellow writers, but be sure to give back to the community as well.

Great advice! Loved the book, can’t wait to have you back for the next one!

Otto Rex Luthor is a two-year-old goldendoodle who enjoys long car rides and even longer naps.

His hobbies include excavation, home security, and posing for Instagram. 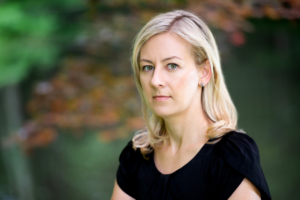 Tessa Wegert is the author of the Shana Merchant series of mysteries, which includes DEATH IN THE FAMILY, THE DEAD SEASON, and DEAD WIND.

A former freelance journalist, Tessa’s work has appeared in Forbes, The Huffington Post, Adweek, The Economist, and The Globe and Mail. She grew up in Quebec and now lives with her husband and children in Coastal Connecticut.