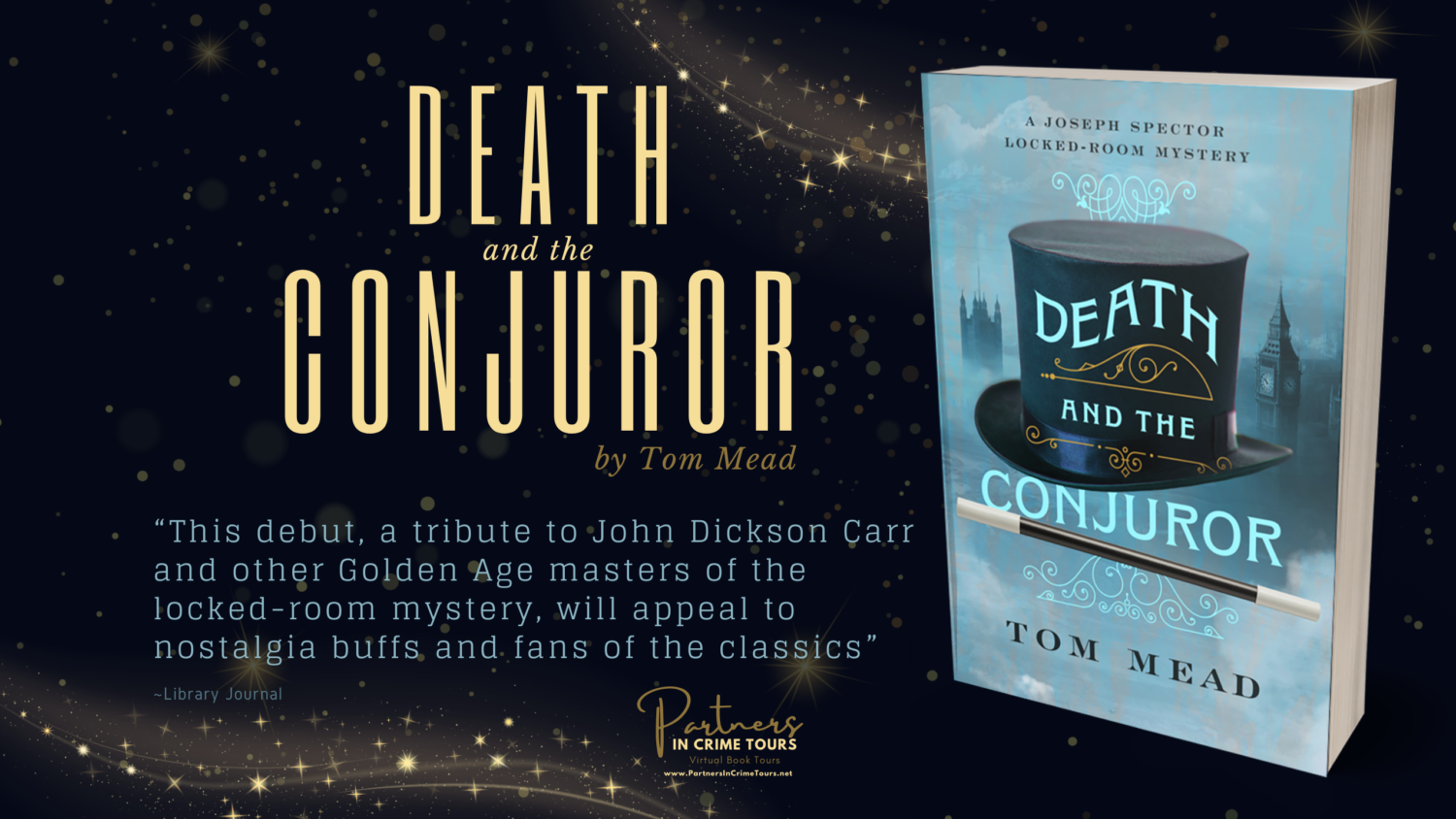 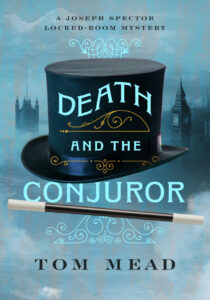 Behind The Velvet Curtain: Writing (and Reading) Theatrical Murder Mysteries

My book Death and the Conjuror, a locked-room mystery set in 1930’s London, begins backstage at a fictional London theatre called the Pomegranate. My fictional sleuth is a retired music hall conjuror called Joseph Spector; a man who knows all the tricks of the theatrical trade. As such, my research gave me the opportunity to delve into the rich history of the West End, and to revisit some of the many great golden age theatrical murder mysteries. It also made me wonder—why is theatre such potent subject matter for mysteries?

I think the fascination can be traced all the way back to Shakespeare’s Hamlet, where the travelling players re-enact the murder of Hamlet’s father onstage. This collision of crime and stagecraft still resonates today. And what is the title of that play-within-a-play? The Mousetrap. It’s no coincidence that the most popular mystery writer of them all, Agatha Christie, used this title for her own play, which has been running in London for over seventy years, breaking all kinds of box office records.

Of course, actors are adept in the art of disguise. Their vocation revolves around pretending to be other people. This also makes them ideal subject matter for mystery fiction. Indeed, there have been occasional real-life instances where actors have given such convincing performances in criminal roles that their audiences have been unable to see through the façade. Take for instance Richard Mansfield, one of Victorian England’s most famous actors, whose dual role in Dr. Jekyll and Mr. Hyde led audience members to speculate that he might be the notorious murderer Jack the Ripper. Christie’s novels Lord Edgeware Dies and Three Act Tragedy feature actors and actresses embroiled in crime. Likewise her Miss Marple mystery Sleeping Murder reveals a key clue during a performance of the Jacobean tragedy The Duchess of Malfi.

Another Marple novel, They Do it with Mirrors, is not overtly theatrical—it’s not set in a theatre, after all- but nonetheless there is an unmistakable air of staginess to it. The title comes from an observation in the story that the crime scene is like a stage set, where the “audience” (witnesses) are deceived by a conjuring trick orchestrated by the killer. This is a very apt analogy, and one which goes a long way toward explaining the mystery genre’s preoccupation with performance.

But Christie is just the tip of the iceberg. New Zealand-born Ngaio Marsh, often called one of the four “Queens” of classic crime, along with Dame Agatha, Dorothy L. Sayers and Margery Allingham, wrote a long-running series featuring suave sleuth Roderick Alleyn. Many of his cases feature a theatrical setting, as Marsh was an accomplished theatrical director whose professional experience informed her writing and her characters. Enter a Murderer is the first of Alleyn’s stagy escapades, while Vintage Murder features a travelling theatrical troupe in Marsh’s native New Zealand. Overture to Death is set in the world of amateur dramatics, and involves a rather ingenious method for murder.

Even Death and the Dancing Footman, a classic country house mystery, includes overt references to Pirandello’s stage masterpiece Six Characters in Search of an Author, a play which had a profound impact on Marsh. Likewise Final Curtain also transposes the theatrical milieu to the classic English country house. Opening Night is, as the title suggests, heavily theatrical, with much of the plot taking place at the fictional Vulcan Theatre. False Scent features a murdered actress, while Death at the Dolphin includes a glove which supposedly belonged to Shakespeare’s son, Hamnet. Many characters from the latter title return in Marsh’s final Alleyn mystery, Light Thickens. Published in 1982 (the year of the author’s death), the plot focuses on a production of Macbeth which is blighted by murder.

There are of course plenty of other fine examples, including one of the greatest murder mysteries ever written—Death of Jezebel by Christianna Brand. It’s hard to say too much about this title without giving the game away, so the best thing you can do is to check it out for yourself. Another example is Come to Paddington Fair by Derek Smith, which deserves a much wider readership. It deals with an actress who is murdered onstage in full view of an audience, and yet the exact circumstances remain shrouded in mystery. A truly brilliant book.

In a more mainstream vein, the very first novel by the writing duo known as “Ellery Queen” is set in a Broadway theatre. It’s called The Roman Hat Mystery, and it laid the groundwork for a dazzling and monumental series. But even better is their “Drury Lane” tetralogy, Tragedy of X, Tragedy of Y, Tragedy of Z and Drury Lane’s Last Case. The eponymous sleuth, Drury Lane, is a great and eccentric character; a retired actor who has taken an interest in solving crimes. As such all the titles in this series have a richly dramatic flavour, but arguably the last is the most outright theatrical, as it deals with the discovery of what appears to be a long-lost play by none other than William Shakespeare. Incidentally, this is a theme which recurs in golden age author Edmund Crispin’s Love Lies Bleeding.

I couldn’t write an overview of theatrical murder mysteries without mentioning my absolute favourite writer: John Dickson Carr. He was the master of the locked-room mystery, and a major inspiration to me. Naturally he featured theatres in some of his stories, though not as prominently as other golden age authors. Panic in Box C is the most openly dramatic, dealing with an apparently impossible murder in a theatre box, but there are plenty of other references throughout his oeuvre, including a particularly ingenious Shakespearean clue in the fabulous novel The Plague Court Murders.

Naturally, the larger-than-life personalities which inhabit the theatrical sphere lend themselves to comedy, too. Alan Melville’s Quick Curtain is a golden-age example of this, recently reissued as part of the British Library’s “Crime Classics” series. And more recently, Simon Brett’s light-hearted mystery series features actor-detective Charles Paris. Here the emphasis is very much on humour, and these books have also been adapted successfully for radio featuring the excellent Bill Nighy.

Perhaps the best explanation for the frequent overlap between mystery and theatre is that in both cases the audience actively wants to be deceived. We go to see a show to get lost in a story, told with smoke and mirrors. We read murder mysteries to see if the killer (and the author) can trick us. The delightful artifice of the theatre perfectly complements the artful deception of the classic mystery. I hope that readers of Death and the Conjuror will enjoy exploring its theatrical setting, and lose themselves in its world of trickery and intrigue.

Excerpt Death and the Conjuror, a Theatrical Murder Mystery

Olive already had the phone in her hand. “Two three one, Dollis Hill,” she announced. “Dr. Anselm Rees has been murdered.”

While she provided a few scant details, she looked around the room and noticed something.

“The windows are locked,” she said as she hung up the phone.

“The windows. They’re locked on the inside.” To prove this, she gripped one of the handles and rattled it. It would not move, and the key protruded from the lock.

“Then how did the killer get away?”

“He can’t have come out through the hall. I was there the whole time. And not five minutes ago—not five minutes—I can tell you that the doctor was alive and well in this room because I heard him talking on the telephone.”

Della thought about this. “It can’t be locked.” She reached out and tried the handle for herself. But the windows did not budge.

“It’s locked on the inside,” said Olive, “just like the door.”

Della turned and looked at the corpse. He had sunk down in the chair like an unmanned hand puppet.

In the far corner of the room lay the wooden trunk. Olive caught Della’s eye and nodded toward it. Della frowned incredulously. Olive shrugged, as if to say, Where else would he be?

The two women crept across the soft plush carpet toward the trunk. Olive looked at Della and held a finger to her lips. She seized the poker from the fireplace and raised it above her head. Then she gave Della a quick nod.

Olive let fly a fierce war cry and swung the poker like a tennis racquet. But all she hit was empty air. The two women peered inside the trunk. It was perfectly empty.

Olive led the way to the kitchen—but not before pulling shut the study door behind her, sealing in the late Dr. Rees once again.

They both felt slightly better after a tot of brandy. No less horrified, but more prepared to deal with the practicalities of the situation.

“What I don’t understand,” Della said, “is where the killer could have gone.”

“Nowhere,” said Olive. “There was nowhere for him to go.”

Excerpt from Death and the Conjuror by Tom Mead. Copyright 2022 by Tom Mead. Reproduced with permission from Tom Mead. All rights reserved. 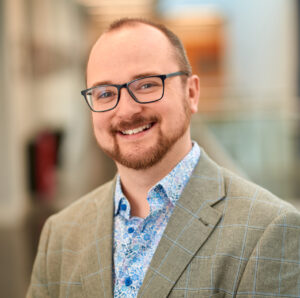 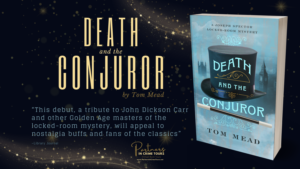