Mysteries with History: The Secret in the Wall by Ann Parker

Mysteries with History: The Secret in the Wall by Ann Parker 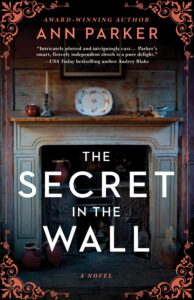 Sometimes you can’t keep your gown out of the gutter…

Inez Stannert has reinvented herself—again. Fleeing the comfort and wealth of her East Coast upbringing, she became a saloon owner and card sharp in the rough silver boomtown of Leadville, Colorado, always favoring the unconventional path—a difficult road for a woman in the late 1800s.

Then the teenaged daughter of a local prostitute is orphaned by her mother’s murder, and Inez steps up to raise the troubled girl as her own. Inez works hard to keep a respectable, loving home for Antonia, carefully crafting their new life in San Francisco. But risk is a seductive friend, difficult to resist. When a skeleton tumbles from the wall of her latest business investment, the police only seem interested in the bag of Civil War-era gold coins that fell out with it. With her trusty derringer tucked in the folds of her gown, Inez uses her street smarts and sheer will to unearth a secret that someone has already killed to keep buried. The more she digs, the muddier and more dangerous things become.

She enlists the help of Walter de Brujin, a local private investigator with whom she shares some history. Though she wants to trust him, she fears that his knowledge of her past, along with her growing attraction to him, may well blow her veneer of respectability to bits—that is, if her dogged pursuit of the truth doesn’t kill her first . . .

To purchase The Secret in the Wall, click on any of the following links: Amazon – IndieBound – Barnes & Noble – Books-A-Million – Nook – Kobo

The Secret in the Wall: A Novel (Silver Rush Mysteries)

The Wandering Protagonist by Ann Parker

When I first toyed with writing an historical mystery (this was back in the “previous century”), I knew exactly where I wanted to set it: In the 1880 boomtown of Leadville, Colorado, during the silver rush.

It’s a real town, high up in the Rocky Mountains, with a rich and varied mining history. Leadville’s silver-mining glory days are long gone, but while they lasted, it was quite the rambunctious place. People rushed in from all corners of the globe, giddy with the possibility of getting rich overnight. Leadville exploded from a tiny mining camp to a city within the space of a year.

Lawlessness, greed, and desperation reigned. As a real-life Leadville lawyer of that time noted in a letter, “A murderer is safer in Leadville than a horsethief.” (There’s more about the lawyer and his letter here.

It was the perfect venue to place my protagonist, Inez Stannert, and set her about solving murder mysteries.When the first book of the series, Silver Lies, opens, Inez—a woman with a mysterious past, a complicated present, and an uncertain future—is running a saloon in Leadville assisted by her missing husband’s business partner.

For each book, I dove into research, reading letters, biographies, and historical newspapers, and scrutinizing city directories and the census data. All sorts of fascinating historical facts and events proved fodder for fiction: A railroad war to see what railway company would win right-of-way to build its roads to the city and its mines. Former president Ulysses S. Grant’s visit to Leadville. Rumors of grave-robbers haunting the city’s cemetery after dark to steal bodies for underground “anatomy classes.” I was feeling quite at home in 1880 Leadville.

Then, as I was writing the ending of What Gold Buys, the fifth book in my series, Inez decided she needed a new start. She was heading west to San Francisco.

I sat back, stared at what I’d written. I tried to come up with a different scenario. A scenario where she would just stay put, or maybe where she’d traipse off for a quick adventure and then return to Leadville.

Nope, nothing else rang “true.”

And, as I looked back at the previous books, I realized that they had been driving toward this moment, when Inez resolves to go to San Francisco. So, off she went.

One of my first decisions was to settle on what Inez would do to make ends meet. She couldn’t very well buy a saloon and take up that life again. For one thing, she was now guardian to a twelve-year-old orphan, Antonia. Inez wanted to create a stable life for the girl in San Francisco.

Luckily, from the very start of the series, I’d set Inez up to be a talented pianist, so it made sense to have her take a position as manager of a music store. This being fiction, I located that store where it best suited me and Inez’s future exploits. Thus, the D & S House of Music and Oriental Curiosities sits at the edge of the city’s business district, not far from the red-light district, Chinatown, and the waterfront.

Since Inez has shown her mettle as an astute businesswoman from the get-go, she also has a side line in San Francisco as a 19th-century “angel investor,” providing financial backing for enterprising women running small businesses such as laundries, boardinghouses, and millinery shops.

Another conundrum facing me when I up and moved my protagonist from Colorado to California was that I had to leave my beloved cast of secondary characters behind. Inez needed new friends, new business partners, a new neighborhood. I found inspiration in the plentiful research resources available for 19th-century San Francisco. A group of young musicians who hung around the music store evolved in place of Inez’s poker-playing intimates in Leadville.

The businesswomen Inez backed also helped flesh out the cast. I also found story inspiration in events, past and present. For instance, for The Secret in the Wall, the initial spark for a story came from a 2016 news article that detailed the unearthing of an elaborate bronze-and-glass casket from beneath a San Francisco home. The well-preserved body of a young girl, with long flowing blonde hair, was visible through the glass “window” of the casket. No one knew who she was, or when and how she came to be buried in that spot.

My imagination took off from there, creating a scenario in which the remains of a long-interred body of a man falls out of a wall, along with a bag of gold.

Questions immediately arose: Who was he? How, when, and why did he die? And what is he doing in the wall, with all that gold? Off I went, on a merry chase through San Francisco’s history, pulling facts from history here and there and spinning them together with fiction. My protagonist’s move West proved a challenge, but like many challenges, it came with opportunities… and who knows? Perhaps some time in the future Inez will get tired of San Francisco, and she and Antonia will head off for somewhere else, in search of more adventures.

Great to have you visit today. I wish you and Inez many more fascinating adventures! 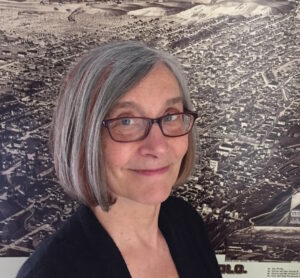 Ann Parker is a science writer by day and fiction writer by night. Her award-winning Silver Rush Mysteries series, published by Poisoned Pen Press, a Sourcebooks imprint, is set primarily in 1880s Leadville, Colorado, and more recently in San Francisco, California, the “Paris of the West.”

The series was named a Booksellers Favorite by the Mountains and Plains Independent Booksellers Association, and Ann is listed in the Colorado Authors’ Hall of Fame. The Secret in the Wall is the eighth and newest entry in the series.

Visit all the stops on the tour!

February 23 – I Read What You Write – CHARACTER GUEST POST

February 24 – Escape With Dollycas Into A Good Book – REVIEW