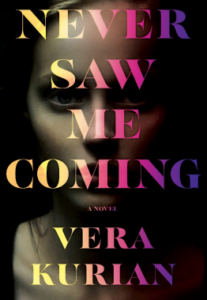 “Fresh, fast-paced and fiendishly clever! If you love watching true crime and wonder about the psychopaths among us, this is the book for you!” — Lisa Gardner, #1 New York Times bestselling author

Never Saw Me Coming is a compulsive, voice-driven thriller by an exciting new talent in fiction that will keep you pinned to the page and rooting for a would-be killer.

You should never trust a psychopath. But what if you had no choice?

It would be easy to underestimate Chloe Sevre… She’s a freshman honor student, a legging-wearing hot girl next door, who also happens to be a psychopath. She spends her time on yogalates, frat parties and plotting to kill Will Bachman, a childhood friend who grievously wronged her.

Chloe is one of seven students at her DC-based college who are part of an unusual clinical study of psychopaths—students like herself who lack empathy and can’t comprehend emotions like fear or guilt. The study, led by a renowned psychologist, requires them to wear smart watches that track their moods and movements.

When one of the students in the study is found murdered in the psychology building, a dangerous game of cat and mouse begins, and Chloe goes from hunter to prey. As she races to identify the killer and put her own plan for revenge into action, she’ll be forced to decide if she can trust any of her fellow psychopaths—and everybody knows you should never trust a psychopath.

To purchase Never Saw Me Coming, click on any of the following links:

Never Saw Me Coming has a psychopath for a protagonist. What led you to creating that type of character?

I read a lot of thrillers and had been encountering a lot which featured female main characters who were sort of hapless and victim to the actions of others—men in particular. I wanted to have a main character who was smart and incredibly driven and very, very dark. I also wanted to give the reader a sense of what it might be like to be inside the head of a psychopath and I wanted them to be a little surprised by what they found.

A lot of people love Chloe despite the “bad” things she does, and others who highly disagree with her actions still find her compelling, even if they don’t want to.

Tell us about the publishing journey for your debut novel:

I was supposed to be working on a revision of a different book when I suddenly got the idea for Never Saw Me Coming, which I became so interested in that dropped everything else to work on it.

I had just been a writer of literary fiction—short stories only, but then there was a multiyear stint of me trying, unsuccessfully, to be a novelist. NSMC is the third novel I queried and probably the 6th novel I’ve written. Across three books, I had queried hundreds of agents and nearly gave up. When I wrote this book I knew it was a viral feel to it, and felt that it filled a hole in the market, so I made a deal with myself: if I could not find an agent for this book, I would give up novel writing and go back to strictly writing short stories (which I already had some success with placing.)

I signed with my agent Rebecca in November of 2019 and we worked on revisions which I finished the first week of March 2020. I sent her an email saying, “I think this coronavirus thing might be really serious…?”

Rebecca wanted to wait a bit before we went on submission, putting her ear to the ground to see if editors really were acquiring. We went on submission finally at the end of May, just when DC was taken over by enormous protests for racial justice. I was also in complete isolation in my small apartment because of the lockdown, not even podded up yet with friends because I was too scared.

I was incredibly anxious about going into the submission process with editors, but my wait wasn’t too long: we submitted on a Thursday and by Monday we had an offer and went to auction shortly after.

Between the political context of what was going on in the country, the weirdness of COVID, and the good news that kept rolling in, my life felt increasingly surreal. Shortly after we were pre-empted by Vintage UK, who had scouted the book, and by John Davis for Universal TV.

Incidentally, the entire production of this book was virtual. I did not actually meet Rebecca and my editor Laura Brown at Park Row in person until a few weeks ago. It seems that suddenly, within the past few weeks as the finished hardback is in my hands, that things are finally starting to feel real.

You also read and watch horror, how does your interest in that genre impact Never Saw Me Coming, which is a psychological thriller?

I was born and raised on horror, both movies and books. Like many horror fans, I find a weird comfort in returning to the genre—particularly during the pandemic. Who can explain it, but I suppose it is about returning to familiar tropes, or twists on those tropes, or always searching for the next scare.

For the past year, I have been in a Saturday night horror movie club with a handful of friends from grad school. It has been interesting to see their facial reactions to scary parts of movies—they will cover their eyes or even take off their headphones (which is cheating!)

Meanwhile, I find it very, very hard to find things that actually scare me, which is probably why I can’t write horror myself.

Writing this book was particularly interesting because several characters in it are psychopaths, which means they don’t feel fear. How do you maintain tension in a novel where the primary characters don’t feel fear? How can I make the reader scared or anxious if my character isn’t?

I hope that I was able to accomplish this by putting Chloe into situations where she should feel scared, but doesn’t, and the fact that she doesn’t makes it all the more anxiety-producing for the reader. I’m not sure if it comes off as scary, but creepy, at the very least.

You have a PhD in social psychology. Do you take liberties in your fiction with the psychological aspects of your character in order to serve the story? Or do you remain true to how most scientists understand psychopathic individuals?

I don’t think I have taken liberties for the sake of telling a story here. I did quite a bit of research when writing this book, including looking at some of the latest psychological research about psychopathy.

This also involves understanding that different researchers have different beliefs and that not everyone agrees on everything—there’s crosstalk and researchers duking it out, and this makes it hard for laymen to determine what is “fact.”

One thing that was important for me was to show that psychopathy could look different in different people. There are several psychopaths in this book, and they are all radically different from each other, and the ones we get close to even have different thoughts and feelings about their own diagnoses.

If someone said, “this representation of depression is wrong—this person is going to work and hanging out with friends” this would be an erroneous understanding of that particular condition. Each person with depression looks different, and how their depression is defined is largely impacted by who they are as a person.

How does your short story writing compare to novel writing? Is your process the same? Or do you approach the process differently?

I think short stories are a lot easier. They take less time to write, and because they are smaller in size, it’s easier to see the whole thing in your head at the same time. Structural issues are therefore easier, and it’s unlikely with something of that length that you would have a “saggy middle” issue.

I also think because short stories are not intended for mass audiences (the way a Big 5 novel is) you have more leeway to do something totally out there and WTF and still get away with it.

I would say that my process is still pretty similar: I don’t sit down to write a short story or novel till I have the majority of it figured out already. I typically get the idea for the premise and characters right away, and then I stew on that a bit before I’m ready to write.

I’ve been told I’m a fast writer, but I think that happens because when it appears I’m doing nothing I’m actually thinking about the story so that when I finally sit down to type, everything comes out quickly.

The one huge difference is that the scope of a novel is just so much larger. Also with a mystery you want to make sure that the puzzle all fits together. So I do lot of work with Post-its, my trusty bullet journal, and notecards in Scrivener (which I only use for planning, not writing).

To keep the book fast paced, I wanted to make sure that each scene had an actual plot point in it, or a clue drop, which is true for the entire book, except for Chapter 2, which I did as a calculated risk.

I’m working on a book that is more of a mystery than a thriller, and that has some supernatural elements (or does it..? That is part of the mystery).

In all honestly, the publicity in the runup to my book coming up is eating up most of my free time, and I still have a job, so I haven’t gotten any new writing done in a number of months. But I’m not worried about it. I’m not a big believer in “you need to write every day.”

Read a lot. Spend less time daydreaming or feeling jealous and more time at the grindstone. You need to be willing to get knocked down hundreds of times and keep going.

Excellent advice! Never Saw Me Coming is on my TBR! Great to have you here, best of luck with your launch!

This is Editorial Dog! She just turned fifteen, and is the sweetest, most charismatic dog I have ever met.

Every person who meets her falls in love, including people who “hate dogs.”

She has been my best buddy for over a decade, particularly during the pandemic, where we spent tons of time together.

Her interests include sleeping, salmon, and naps. 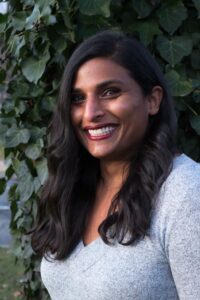 Vera Kurian is a writer and scientist based in Washington DC.

Her debut novel, Never Saw Me Coming, is forthcoming from Park Row Books (US) and Harvill Secker, Vintage (UK) in Fall 2021.

Her short fiction has been published in magazines such as Glimmer Train, Day One, and The Pinch.

She has a PhD in Social Psychology, where she studied intergroup relations, ideology, and quantitative methods.