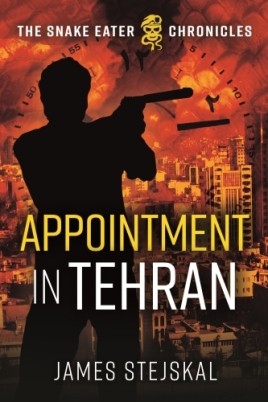 Appointment in Tehran, a Military Thriller 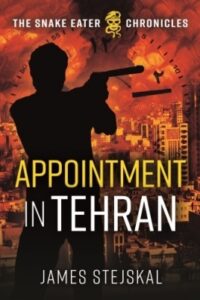 When radical Iranian students seize the U.S. Embassy compound in Tehran and take over fifty diplomats hostage the U.S. President has to negotiate with a government that wants only to humiliate the United States. When talks fail, the President must turn to the military to bring the Americans home by force.

As preparations are made for an audacious rescue, an American intelligence officer hides alone in a Tehran safehouse with a secret. He is protecting a powerful weapon known as the Perses Device, which is now at risk of being captured and employed against the United States. The Agency Director orders that it must be brought out at all costs.

But as a small American team clandestinely enters Tehran to lead the way for the rescue force, a traitor spills the secret and KGB Spetsnaz operatives begin their own search for the weapon.

At the last minute, one more American is added to the advance team—his sole mission is to get the Agency officer and the Perses device to safety.

When the rescue mission fails, only two Americans are left to run the gauntlet of enemy agents and get the weapon out.

Getting in was easy…

To purchase Appointment in Tehran, click on any of the following links: Amazon, Barnes & Nobel, Google Play, IndieBound & GoodReads

Military Thriller: a subgenre of thrillers focusing on military situations and characters with the same tension and danger of a thriller.

Appointment in Tehran intersperses real events with fictional ones. How do you determine what to keep historically accurate and what to fictionalize?

First and foremost, I fictionalize things that need protection, like my comrades, sources, and methods. After that, I may change reframe details, shorten timelines, or combine incidents to build the suspense and action. And, although it’s fiction, Appointment in Tehran holds very close to what actually happened.

One of my favorite quotes is by Albert Camus and that is “Fiction is the lie through which we tell the truth.”

What interested you about the Iran Hostage Crisis as the backdrop for your second novel?

The Snake Eater Chronicles follows a fictional Special Forces unit and its personnel through the of events of the Cold War in Europe. The story is based on a very real and — at the time — very secret US Army unit that was based in Europe.

That unit did some remarkable things and one of them was its participation in the Iran Hostage Rescue mission. The mission ended badly, but there were portions of it that were very successful. Appointment in Tehran tells part of that amazing story.

I am interested in it because I was part of the unit and that mission. I also wrote the unclassified, true story of the unit in a non-fiction book called Special Forces Berlin.

Your background includes US Army Special Forces and the CIA. How did those experiences prepare you to write this novel?

If I told you, I’d have to …  (pause for effect) …  No, 35 years of that kind of work teaches you a lot about yourself, the people you work with, and the rest of the world.

It leaves a mark on you and influences your thinking more than I sometimes realize. It also gave me a better sense of teamwork.

Special Forces is all about the “A-Team” and your fellow soldier; there is nothing more important. It also differs radically from working in the CIA which is very much about the individual and working on your own. There have been many instances when I was the only American for hundreds (if not thousands) of miles. When you’re on your own, you learn even more to rely on your instincts and hope you’ve prepared yourself well. I was also fortunate in that I lived and worked in over 20 countries and visited many more — that gave me a sense of how each location is unique.

It also gave me a feeling for how people — both friend and foe —think and react in the situations that I have encountered, whether funny, scary, or ordinary. It’s said that the military is hours and hours of boredom punctuated by moments of sheer terror; that’s true. After a while you can begin to understand and dissect those moments and write about them.

All of those things influence my approach to writing.

What is a conflict archeologist and how did you get involved with that discipline?

I was writing my first non-fiction military history on an obscure World War I campaign between Germany and the United Kingdom that took place in the Namib Desert in southern Africa. I was looking at the battlefields from the perspective of a historian and an archaeologist and I wanted to learn more. I found out about a British expedition in the Jordanian desert that was investigating Lawrence of Arabia’s exploits during the Great Arab Revolt (1916-1918) — there were many parallels to my work so I took part and learned the craft.

It was a bit easier to outline and construct the novel and although I’m still honing my writing to understand what the reader wants and needs. That requires me to listen to critique from my publisher, editors, readers, and some people I might otherwise just ignore.

I have to learn patience and accept that I make mistakes and need to learn — to learn constantly — more about the craft of story-telling.

I just sent the manuscript for the third Snake Eater Chronicle to my publisher. It may ruffle some feathers because it’s takes place in Northern Ireland during the “Troubles” in the early 1980s.

Again, it’s something I have some exposure to — it was both fun to write and tough to get right. I’m also beginning to outline and write book numbers four and five in the series. They have me excited because one is the prequel to the series that takes place early in the Cold War and the other brings our protagonists ever closer to the modern, post 9/11 era.

I might be a bad person to ask for wisdom but I’ll give it a shot.

What I do is what every writer does: start with an idea, choose a character, imagine a scene, and then decide where the story is going. Sort of — I never have a fixed route or a specific destination when I write — I’m open to change because sometimes a bad character just needs to disappear.

I often end up with 10 or so “chapters” that I never use but I keep them in a file for another story.

The most important advice I can give is to start writing and keep at it. When you write, do it for your reader. Look at what you’ve written, read it aloud and ask, does this tell my story and will my readers connect with it?

Finally, don’t try to be a famous writer, be yourself and tell your story.

I’d say you are an excellent person to ask for wisdom! Great advice. Thanks for hanging out with us today! I look forward to having you back with book three.

Our puppy Cheena (short for cappuccino) is an 11-year-old female Anatolian Shepherd that adopted us when we were in Africa, Namibia to be exact.

Although Anatolians are great guard dogs (think of Sam the sheepdog in the Road Runner cartoons), she flunked out of livestock protection school because she was allergic to the grasses of Africa.

Actually, I think she just wanted to live indoors.

She’s big at a 130 pounds and unusual in that she loves people and rarely barks, she growls.

If she does bark, get out of her way.

I’m thrilled to have na Anatolian on Author Pet Corner! As some of you know, Bet Rivers’ dog in All We Buried is the same breed. 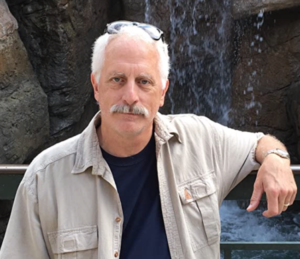 James Stejskal is an author, military historian, and conflict archaeologist. To gain inspiration and research his writings, he spent 35 years serving with the US Army Special Forces and the Central Intelligence Agency in interesting places like Africa, Europe, the Balkans, the Near and Far East.

He is the author of A Question of Timet; a Cold War military thriller as well as the non-fiction booksSpecial Forces Berlin: Clandestine Cold War Operations of the US Army’s Elite, 1956–1990&quot; and Masters of Mayhem: Lawrence of Arabia and the British Military Mission to the Hejaz.

He lives in Virginia with his wife Wanda and an Anatolian Shepherd named Cheena.

To learn more about James, click on his name, photo, or any of the following links: Amazon Author Page, LinkedIn, Goodreads, and Facebook 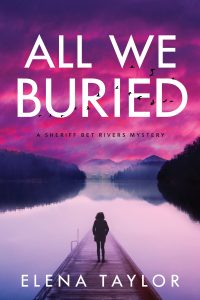