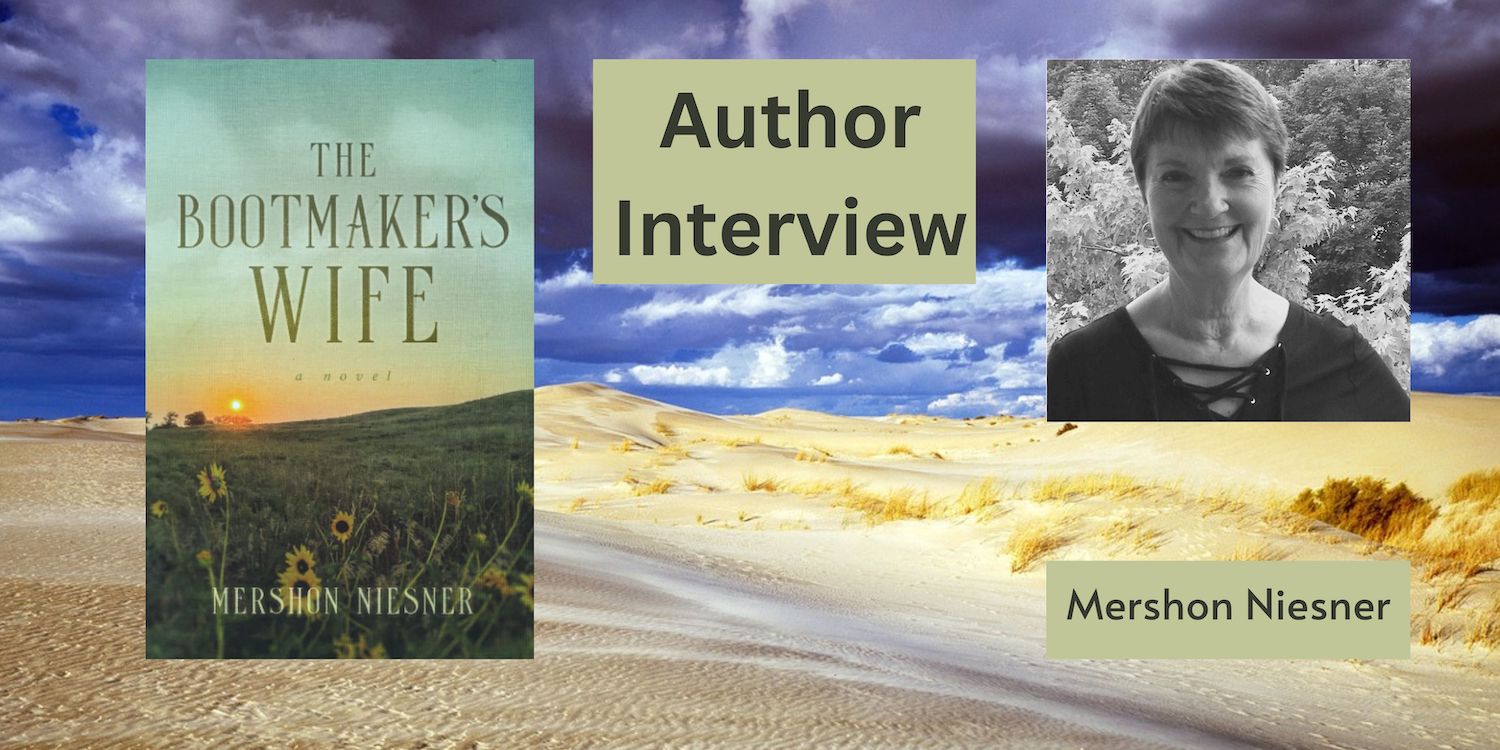 The Bootmaker’s Wife, historical fiction based on the author’s family history. 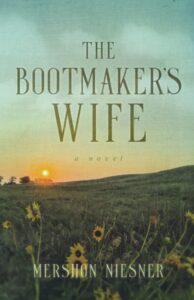 The harsh and rugged Sand Hills of Nebraska in 1875 wasn’t the environment most young ladies brought up in a Victorian home in Illinois aspired to. But when Elizabeth Schultz receives a marriage proposal from Charles Horn, a bootmaker twenty years her senior, she readily accepts. A year later, she’s walking behind a covered wagon along the Oregon Trail as she makes her way to Nebraska to meet her fiancé and start a new life filled with, what she hopes will be, adventure and an opportunity to be her own person.

Elizabeth soon discovers, however, that life on the trail and in a sod house on the prairie is far more difficult than she imagined. Can she cope with the extreme weather, isolation, food insecurity, health challenges, and her husband’s dark side? Will her physical and emotional strength be enough to sustain her or will she give up and return to the comfortable life to which she’s accustomed?

Not only does Mershon Niesner give the reader the opportunity to spend fourteen months in the boots of a woman who has barely left girlhood behind, she immerses them in a startling vivid world where the heroine discovers the importance of caring about the environment, those who came before her, and friendship in a time and place where rugged individualism is revered.

The Bootmaker’s Wife is historical fiction based on the life of the author’s great grandparents.

To purchase The Bootmaker’s Wife, click the following link: Amazon

The Bootmaker’s Wife — The Interview

The Bootmaker’s Wife is set in various locations, but primarily the Sand Hills of Nebraska in 1875. What drew you to that geography for your debut novel?

I grew up as a “free-range” kid in Nebraska and many of the details I wrote about such as mushroom hunting, target shooting, using an outhouse, cooking over an open fire, walking to school in a blinding blizzard, were part of my experience. My home town of Grand Island is where the main characters, Elizabeth and Charles Horn, were married.

I lived my pre-retirement life in the Chicago area and have (sort of) retired to Florida but I still consider myself a Nebraska Girl and wanted readers to have the opportunity to get off of Interstate 80 and “see” the real Nebraska.

Mostly, I wanted to relive and share stories my dad told of his grandparents forging a life in a sod house in the Sand Hills. His grandfather was a boot maker for soldiers at Fort Hartsuff and had a shop in the nearby town of Calamus. The Jesse James true story was one of my favorites.

How did you go about researching the era and the places for The Bootmaker’s Wife?

The original manuscript for The Bootmaker’s Wife was written during Covid isolation so I was unable to visit the location in person. The following summer, however, I traveled West and stayed at a farm house, a cattle ranch, stepped inside an authentic sod house, and toured Fort Hartsuff, a restored fort in the region of their house. I took the book cover photo near where they actually lived in 1875 and ’76.

James Domeier, Superintendent of Fort Hartsuff State Historical Park, provided me with historical records as well as an extensive tour of the grounds and buildings of the restored fort. He also suggested I read The Trail of the Loup, a documentary written by H.W. Foght and originally published in 1906. Many of the true stories in the book were told to Foght first-hand. It was a wonderful resource for scenes like the grasshoppers and the disappearance of the two children (both true stories).

I also received information from my great aunt, Audrey Linderkamp, who, after the death of her parents, was raised by Charles and Elizabeth. She sent me their photo and old newspaper clippings.

Tell us about Elizabeth Schultz:

Much of what I wrote about Elizabeth is fictional. Her birthdate, wedding date and other facts are historically accurate but her personality and the kind of person she was came from my imagination. Elizabeth is just one of the brave and hardy women I portray in the book.

As a social worker and Certified Life Coach, I have spent much of my life championing women and encouraging them to be strong. Portraying women in The Bootmaker’s Wife was another opportunity to send a similar message and revere the women who cleared the way for us today.

Elizabeth was not quite fifteen when she married Charles who was twenty years her senior. It might seem unrealistic to many readers that a girl that young could run a household, especially in the difficult times of 1875. I was a motherless, only child at eight so, by age fifteen I had many of the homemaking skills Elizabeth displayed—without the challenges of 1875, of course. So, to me, her life seemed plausible plus her age is historically accurate.

You are also the author of Mom’s Gone, Now What? Ten Steps to Help Daughters Move Forward After Mother Loss. Tell us about that project:

As I mentioned above, my mother died when I was eight and her mother died when she was three. I was raised by my dad. My life has been, mostly, joy-filled and productive. I wanted to tell my story to help other daughters of loss move forward. I also interviewed over fifty motherless daughters. Their stories, along with my own experience, helped me shape the ten steps I wrote about.

I didn’t choose the subject, I believe it chose me. It was another way to honor extraordinary women.

What can we find you doing when you aren’t writing?

Although we don’t see them often, my husband and I have a combined family of six children, 19 grandchildren, and 11 great-grands. Just tracking birthdays and anniversaries keeps me busy. In the summer months and at Christmas, we return to Illinois where we see most of our family.

As an author I read a lot but I also love to entertain. I’m in a cooking club and have attended cooking schools in Italy, France, and Spain. I belong to the Marco Island Writers and a writers’ critique group, an international organization that supports scholarships for women, a weekly group called Girl Talk God Talk, Marco Island Women Democrats, and I’m active in my church. I write a column titled Ask the Life Coach for my local newspaper. At 77, it’s especially important for me to stay fit so I work out three days a week.

I’m writing a sequel to The Bookmaker’s Wife with a working title of THE BEE LADY. Angie is a mysterious and interesting character in my first novel so I decided to back-track and tell her story from the time she was ten and became separated from her family as their wagon train crossed Nebraska.

Just do it! Although I’d had experience writing business materials (adoptive case studies, newsletters, brochures, video scripts), I published my first book on my 75th birthday; my second at 77-1/2. It’s never too late, you’re never too old, too young, or too inexperienced.

Find yourself a good editor! I would never put a book out for the public to read without Elena’s amazing editing. Seriously! (Awwww, shucks … it was my pleasure to work with your wonderful manuscript!) 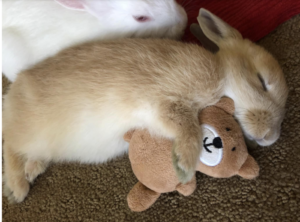 Although I’ve had pets most of my life, I personally no longer have one. However, my daughter, Katie, fosters rabbits.

Bunnies don’t do well in shelters due to barking dogs, etc. so she keeps them (one or two at a time) in her home, turns them into cuddly family pets, then helps them find forever homes.

Her husband and three kids have allergies so they can’t have dogs or cats but bunnies work for them.

If Katie had her way, she’d live like Elena, with animals all around. 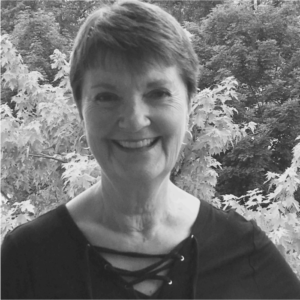 Mershon Niesner has a background as a Certified Life Coach, child welfare social worker, marketing/communications entrepreneur, freelance writer, and author. Between them, Mershon and her husband have six children, nineteen grandchildren, and eleven great-grands.

In her first book, Mom’s Gone, Now What? Ten Steps to Help Daughters Move Forward After Mother Loss, Mershon writes about losing her mother at eight-years-old. In addition to her own experience, Mershon interviewed over fifty motherless daughters and uses their stories to illustrate the ten steps. Her mission is to help other women who have experienced loss move forward in a healthy way.

Growing up in Nebraska cemented the author’s love of the a 360 degree view of the horizon, the constant wind, the majestic sunsets, and the rolling hills of the northern prairie. Later, as a Florida transplant, she wanted to relive and share stories her father told of his grandparents forging a life in a sod house in the Sand Hills of Nebraska in 1875 so she wrote The Bootmaker’s Wife, a historical fiction incorporating some aspects of her great grandparent’s life.

The Foundation of Plot, a Wait, Wait, Don’t Query (Yet!) guidebook. #1 Amazon bestseller

Header image by Falkenpost on Pixabay.

Lisa Brackmann on the Launch of Black Swan Rising