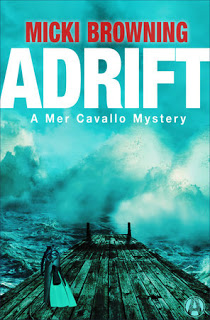 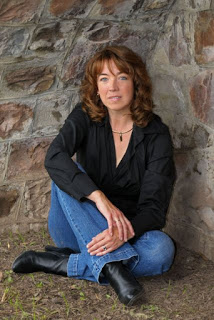 An FBI National Academy graduate, Micki Browning worked in municipal law enforcement for more than two decades and retired as a division commander – wonderful fodder for her current career as a full-time writer.

Her mystery, Adrift, set in the Florida Keys, won the 2015 Daphne du Maurier Award for Excellence and the Royal Palm Literary Award for best unpublished mystery and unpublished book of the year. It was published January 2017 by Alibi-Random House.

Micki resides in Southern Florida with her partner in crime and a vast array of scuba equipment. She’s currently working on Beached, the second in the Mer Cavallo Mysteries.

To learn more about Micki – visit her on social media.


THE INTERVIEW
Since retiring from the police force, you’ve earned your professional divemaster rating and diving plays a huge role in your first novel Adrift. Tell us about an exciting dive experience. 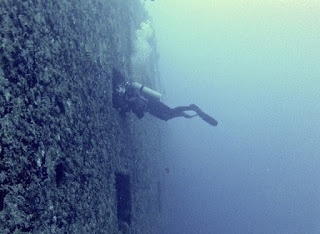 I find every dive exciting. I’ve had the pleasure of diving with giant Manta rays in Hawaii, Goliath groupers in the Keys, and exotic reef fishes and sharks in the Caribbean. I’ve dived in caves, caverns, and kelp. I’ve even been diving with Mickey Mouse at Epcot. Of all my experiences, I have to say I enjoy exploring wrecks the most. Swimming along the bones of sunken vessels spurs my imagination into high gear as I imagine the stories left behind. (The photo shows Micki about to enter the USS Spiegel Grove, the ship in Adrift).
Your background in law enforcement makes you very well suited for understanding both crime investigation and insights into criminal behavior. We often hear about how authors relate to the good guys in their novels – how do you relate to the bad guys? Are they based on real people or incidents?
My background certainly informs my writing. I’ve learned that not all criminals are bad people and not all victims are angels. Life is messy. Complicated. A cop’s most crucial skill is communication, the ability to build rapport. I’ve discussed Chaucer with an arrestee on the way to jail, and learned how to juggle from a traumatized seven-year-old. Everyone wants to be heard. Listen long enough and everyone can find common ground. The people I’ve met in life are inspirational, but their stories are theirs to tell. I write fiction. It’s the humanity I try to get right. (By the way, Micki, I’m stealing this line).

You’ve lived on both coasts, Santa Barbara to the west and the Florida Keys to the east. You’ve also lived high in the mountains in Durango, Colorado. How much are you impacted by environment as a writer? Place takes a central role in Adrift, can we anticipate Mer Cavallo traveling outside the Keys? Or future books or series taking place in the mountains?

I find setting to be as integral to the story as character. I want to experience what the character is experiencing. Is it humid or icy? Does she hear a raptor or a seagull? What does he see that makes an impression? What childhood memories are evoked by the location’s scents? I love when non-divers tell me how much they enjoyed my underwater scenes. They’ve never worn a tank but I’ve introduced them to diving. Mer will never be landlocked, but considering seventy percent of the earth is covered by water there are many places she can explore—above and below the surface.
As to future books? Mer’s next adventure is all wrapped up and I’m currently working on a story that takes place in the mountains during the dead of winter. The mood is very different. (To see more photos of the Florida Keys and locations used in Adrift, visit Micki’s blog by clicking HERE)
As a police officer, you’ve done a lot of conflict resolution, everything from pulling someone over for a traffic violation and needing them to agree with your request for their license to working as a crisis negotiator. Tell us about a situation where you expected a violent reaction, but you were able to talk someone down.
One busy weekend night, I was dispatched solo to a man suspected of being high on PCP and creating a disturbance. This is not a good call to have to go to on your own, as a person on PCP is impervious to pain and highly excitable. When I approached, I saw he was seated on a bus bench, rocking back and forth, his hands fisting and unclenching. And he was BIG.

I lowered my voice and introduced myself. “It looks like you want to hurt someone.”
He rocked faster. “Yeah. I do.”
Great. “Do you want to hurt me?”
“I don’t want to, I might though, yeah.”
Wonderful. I began second-guessing my career choice. “Would it make you feel better if I handcuffed you?”
His rocking stopped. I steeled myself.
“Yeah.” He turned around and put his hands behind his back.
Moral of the story? Know how to speed-cuff and always be prepared to offer alternatives to the obvious.
What made you decide to create an amateur investigator rather than either a police detective or a private investigator with a police background?
I enjoyed being a police officer, but after 22 years, I wanted to focus on something else. My husband and I relocated to the Keys so we could dive and figure out what we wanted to do next. Enter a bit of serendipity. He became a scuba instructor, and I became a divemaster with a writing itch. My favorite wreck dive is the USS Spiegel Grove in Key Largo. A documentary crew was filming a night dive on the ship when one of their divers suffered a medical emergency at depth. Happily, the diver recovered, but the event sparked a whole bevy of what ifs that eventually became my novel, Adrift.
What are you working on now?
I’m writing a police procedural. It’s time to put all that training and experience into action.

Final words of wisdom:
The best bit of writing advice ever given to me was simple: plot from the point of view of the antagonist and write from the perspective of the protagonist. A character can’t solve a crime if the author doesn’t know how it was committed.

Surviving Covid: I’m Doing The Best I Can