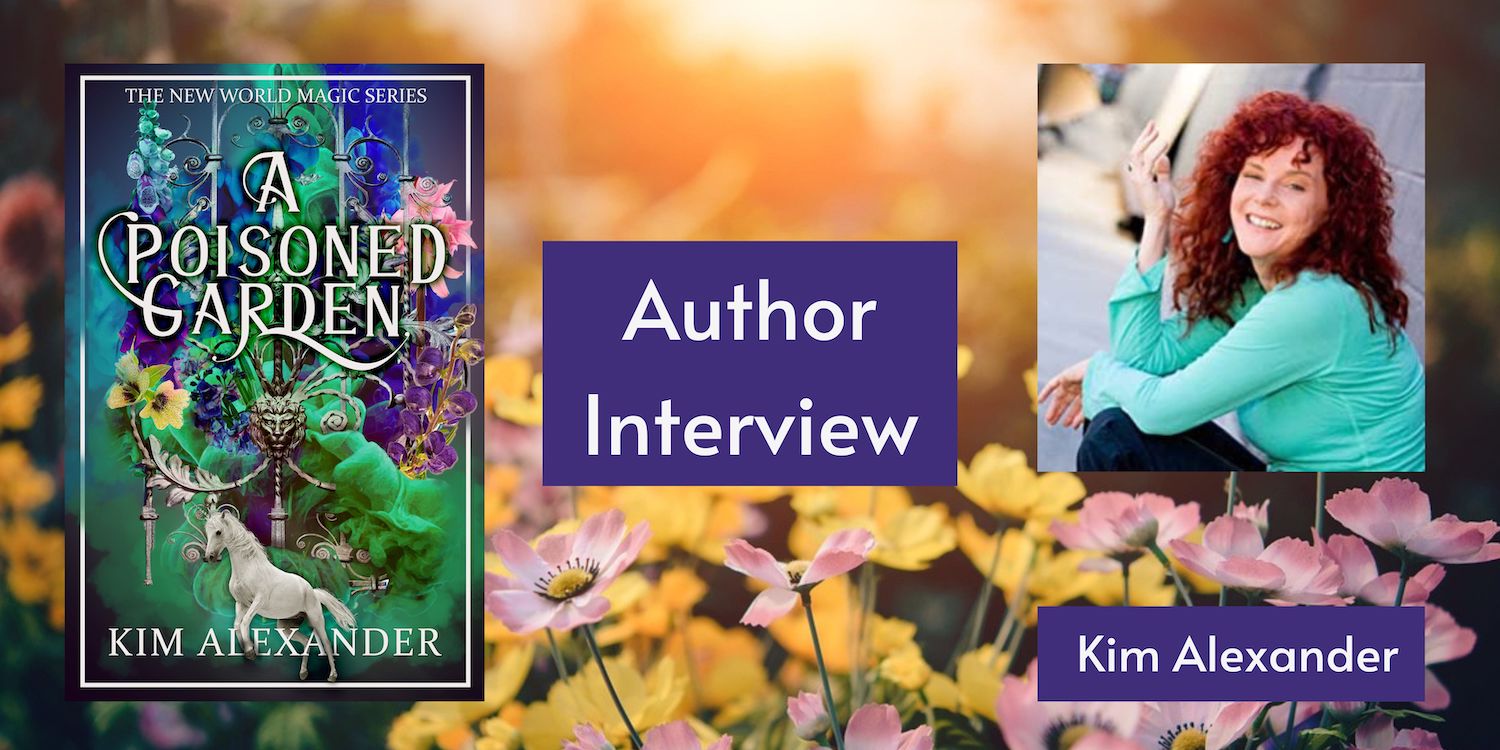 A Poisoned Garden, the latest novel by Kim Alexander 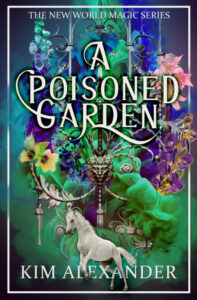 A unicorn walks into a bar and…wait, what was I saying?

Look, between what I’m pretty sure is premature senility and wanting to barf all the time, I’m barely hanging in there. At this point, I need a break after solving xeno murders, fighting murderous fox shifters, and my best friend nearly murdering me for…reasons.

But do I get a break? No, I get an invitation to the court of the Unseelie fae, and it’s the kind of invitation you can’t refuse because it’s from the king who flip-flops between wanting to share a pizza with me and stabbing me.

The upside is that I can see my best friend Marly, the newly minted and slightly murderous Unseelie fae queen. The downside? Apparently, I have to prevent a civil war between powerful magical beings, and I don’t even get a can opener for self-defense.

Just like clockwork, I’m back to running from supernatural squids, double-dealing with triple-dealing fae who probably all want me dead, and getting tangled up with a beautiful, broken-hearted unicorn who makes me feel guilty, and I don’t know why.
After all, we’ve never met before…have we?

To purchase A Poisoned Garden, click on either of the following links: Amazon & Barnes and Noble

A Poisoned Garden is book four in the New World Magic series. What should readers know about the series if they want to start with this book? 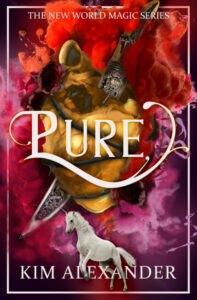 To be honest, I would recommend they start with book one, Pure.

But if they’re the sort that likes walking into cocktail parties and just jumping into conversations, the short version is:

Ruby, a bartender in D.C., is on her way home from her shift one early morning, and stumbles across an attempted poaching—some folks are trying to saw the horn off of a unicorn. (I should stop right here and mention that in this world, xenos—in other words, fairy tale creatures—are real and you might be living next door to one of them. Some are charming and beautiful, some are very much not!)

Of course Ruby does her best to save the unicorn’s life—who wouldn’t? He turns out to be a shifter named March, who is extremely new to the human experience. As the book (and the series) progress, we meet their friends, lovers, ex-lovers, enemies, and therapists—some human, many not. A Poisoned Garden is set mostly in the fae Unseelie Kingdom (they’re not the nice ones) and Ruby is tasked with preventing a civil war.

If she had any sort of weapon, that would help.

If she had all her memories, that would help even more!

Tell us about Ruby, the protagonist of A Poisoned Garden:

Ruby grew up in Florida and was having a great time attending the University of Miami when something awful and traumatic (and xeno related) happened.

After that she withdrew from school, friends, family—she finally went to see a therapist, and when her doctor relocated to D.C., she followed. So Ruby is not a fan of the xenos and does her best to avoid them. She in general keeps her head down. Saving March, (who is a total babe, by the way) feeling responsible for him, and then protecting him from the very creatures she’s spent years avoiding goes against everything that’s made her feel safe—yet for the first time since she was attacked, she feels truly alive.

Ruby can be quite observant but often misses clues about herself. She has a dry sense of humor. I loved writing in her voice!

What is your process for world building in the New World Magic series: 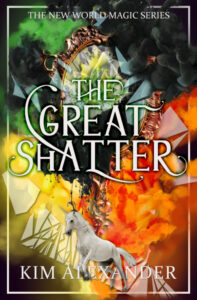 I’d written an enormous epic fantasy series, and my brains needed a break. I wanted to try something shorter, fast paced, contemporary, and in the first person. I knew I wanted to write about my home town. D.C. doesn’t appear much in books that aren’t political or crime thrillers, but it’s also called The City of Trees, and I think it’s beautiful here.

Pure, book one, takes place in the neighborhoods I visit all the time. The bar Ruby works in, The Hare, is loosely based on a great bar called Wonderland. Ruby and March also have field trips to the Shenandoah’s and to Chicago (for reasons!)

But I love fantasy and I adore world building, so each book is longer and more complicated than the last. The Unseelie Kingdom is also heavily featured, and I wanted an air of decaying glamour, sometimes seductive and sometimes grotesque, a world of ritual and rules that we get to see through the eyes of the human characters.

The fae are fun to write in general because (at least in my version) they can’t lie, but they sure love bending the truth like a balloon animal. I’m forced to look at all their dialogue through that lens, which is a complicated treat. I also had the singular pleasure of having a couple of the secondary characters take me by the throat and insist on being front and center, and book three, The Great Shatter, is the result.

In addition to the New World Magic series, you also wrote the Demon Door series. Tell us about those books. 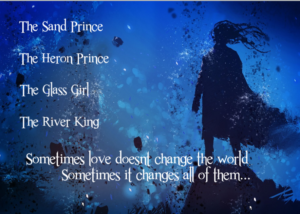 Oh man, those books are my darlings. For some reason I decided my debut series would have two worlds with two different timelines, and over forty named characters. I regret nothing! (except the conflicting timelines—that was murder to keep straight.)

The very short answer is: They’re like Dune but with more sex. The longer answer involves two worlds; one human, one not, and the magical war that closed The Door—the portal between them. The series follows one young man and one young woman who will either find each other and bring the two realms together, or close The Door forever.

There’s murder, kidnapping, betrayal, poisoning, annoying siblings, bad parenting, near-fatal hangovers, a mysterious book within the book, and at the heart of it, a lovely romance. Rhuun, my male MC, is a half-human demon prince with severe social anxiety that he self-medicates with alcohol. Lelet, my female MC, is a bored and restless heiress who just knows an adventure is out there somewhere. She’s right—he’s it.

You have interviewed a lot of authors for Sirius XM Book Radio, any favorite interviews to share with us?

There were so many! And I can’t remember who it was—I want to say JT Ellison–who introduced me to ITW. It was an incredible honor to be in the Debut Class of 2016 (that was one million years ago, I believe.)

A high point for me was the opportunity to run and moderate a panel at NYCC called How to Survive the Inevitable Zombie Apocalypse. I got Gail Ann Hurd (executive producer) and Greg Nicotero (executive producer and make up wizard) of The Walking Dead, along with Rear Admiral Ali S. Khan of the CDC, who had just put out their zombie emergency survival guide (it’s real, and it crashed the CDC website) to sit on the panel for the standing room only event. I still can’t believe I pulled it off.

By the way, the best advice was from the CDC: duct tape, and get to an island.

As far as interviews I did at XM, a few certainly stand out. I got to talk with Anne Rice, George RR Martin, Neil Gaiman, David Baldacci, (who was kind enough to blurb The Sand Prince) Katherine Neville, some cool chic named Elena Hartwell (Elena says thank you!!) and my very last interview was with Stephen King. I can’t remember anyone who wasn’t gracious and delighted to talk about their work, and I took notes! It was like a ten-year master class in how to write a book. I will always be grateful.

Book five of New World Magic. I like to have the next one well underway while the previous is being edited, so I’m not looking at a terrifyingly blank PAGE ONE. I’m about 20,000 words in and all I know is there will be KNIVES.

I think there’s one more book in this series, and the next project will probably be about time traveling crime fighters. It begins in 11th century Norman France so it looks like I’ll have to do research. I guess I’d better find out how to do research.

Great advice! And great interview. Best of luck with all your projects!

Onion is my tuxedo angel baby, 20 pounds of love. When he sits on my lap he dislocated both my hips but it’s worth it.

He’s not what you’d call a deep thinker, but makes up for it with charm and good looks. He doesn’t know any tricks because apparently drinking from the toilet doesn’t count as a trick.

Turn-offs: When F*&(*g Frida won’t leave him alone and also steals his cookies.

Frida came to me via magic. See, we’d lost our Norwegian Forest cat Leeloo (of blessed memory) and Onion was sad and lonely.

I had a dream in which my best friend Stevie Nicks and I were just hanging out at her house, and her Siamese cat had a litter, and she gave me one of the kittens.

Next day I put it out on the ol’ Facebook, and a friend of mine who works with an animal rescue DMed me saying they just happened to have a lil’ baby snowshoe Siamese, and I could go pick her up that week.

So Stevie Nicks and my friend Randy brought Frida to us! This poor thing had every cootie known to man, and some that haven’t been named.

The only person I saw during the first year of the pandemic was the vet. But now she’s a little over two and is perfect in every way except that she’s a total demon.

Also my husband is in love with her and if the house catches on fire, let’s just say I’d better find my own way out.

Onion and Frida may both be found on Instagram: #OnionWhatAreYouDoing and #FridaTheDestroyer. 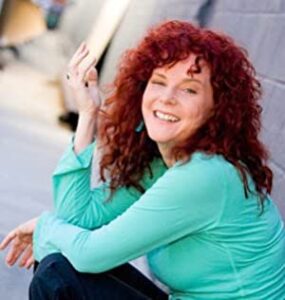 Kim Alexander grew up in the wilds of Long Island, NY and slowly drifted south until she reached Key West.

After spending ten rum-soaked years as a DJ in the Keys, she moved to Washington DC, where she lives with two cats, an angry fish, and her extremely patient husband who tells her she needs to write at least ten more books if she intends to retire in Thailand, so thank you for your patronage.

Header background by toodlingstudio on Pixabay