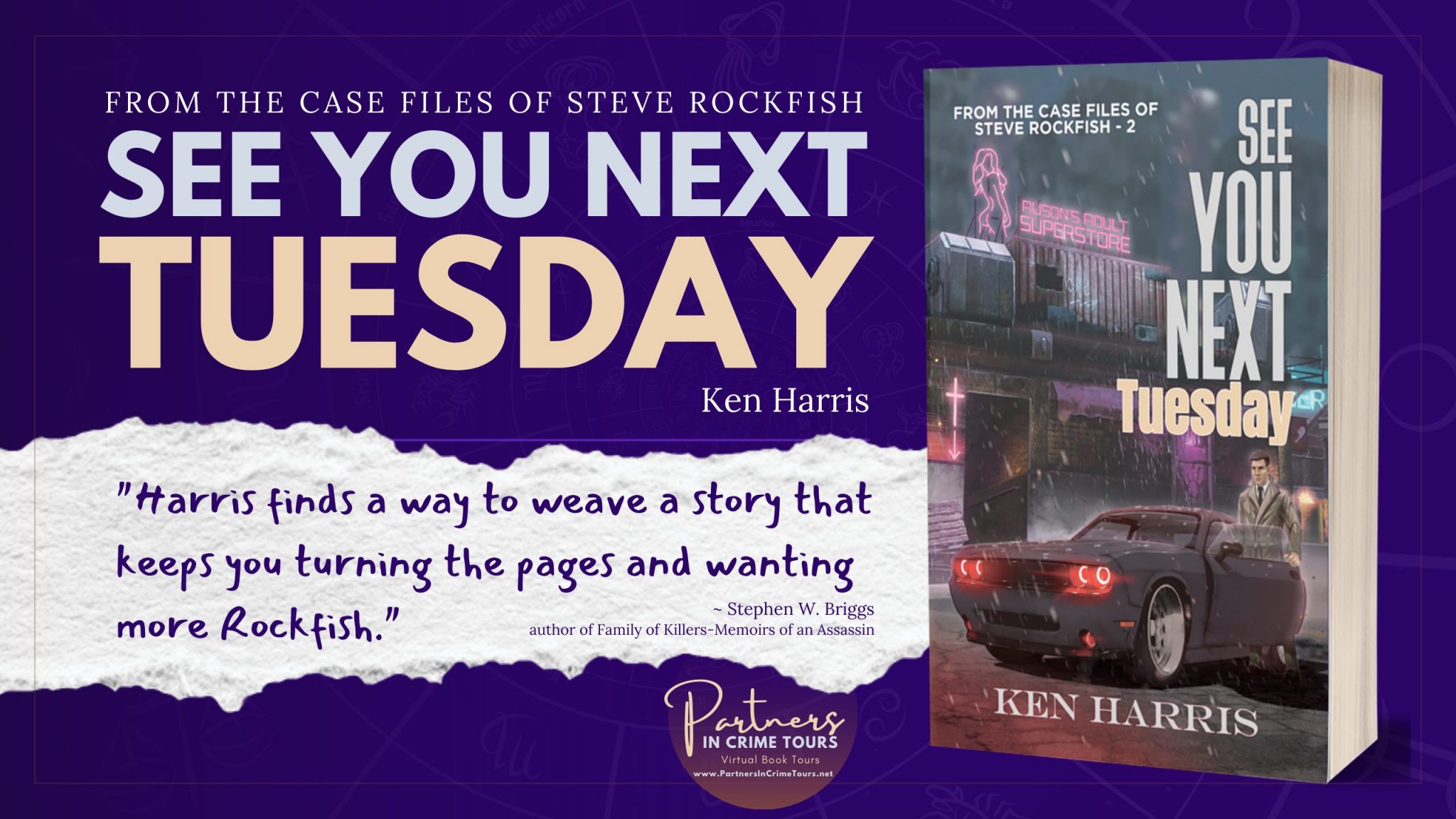 See You Next Tuesday by Ken Harris

See You Next Tuesday 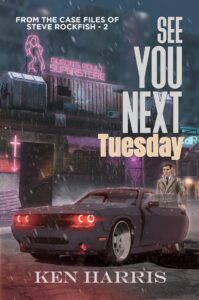 From the Case Files of Steve Rockfish

PI Steve Rockfish’s father loses part of his retirement savings in an online romance scam while partner Jawnie McGee handles the firm’s newest client who spins a tale of alleged spousal infidelity. Rockfish ignores his current case load and becomes fixated on tracking down those responsible for the fraud. Restitution is coming in the form of cash or broken bones. At the same time, Jawnie’s surveillance of the cheating spouse reveals more acts of kindness than sex leading to a client who doesn’t want to believe the good news.

Unbeknownst to the partners, each investigative path leads the partners to the Church of the Universal Nurturing II where the fraud is on a cryptocurrency level. Their new SunCoin is marketed as the only post-rapture currency accepted inside the pearly gates. After all, who wants to show up to the after party with out-turned pockets and not get past Heaven’s paywall?

Church elders court Rockfish and his new-found Hollywood wealth with an old-fashioned honey pot. The danger level ratchets up as Rockfish counters by sending the firm’s two new confidential informants undercover only to find the church’s endgame grift is larger and deadlier than anyone expected.

To purchase See You Next Tuesday, click any of the following links: Amazon | Barnes & Noble | Goodreads

Guest Post by Ken Harris, author of See You Next Tuesday

Your Book is a Movie! Who’s in your dream cast?

The idea of any book in the “From the Case Files of Steve Rockfish” series being made into a movie, or even an episodic series on a streaming service has been with me from the start. Heck, by the end of the first book, The Pine Barrens Stratagem, the characters themselves are the stars of their own docudrama series on the fictional Elon Musk streaming service, NikolaTV. Coming up with the dream cast for See You Next Tuesday didn’t require serious contemplation on my part as I’ve pictured these individuals in my head since I began typing out the prologue back in May 2021. Without further ado…

Bill Mosley, the star of The Texas Chainsaw Massacre 2 and Rob Zombie’s Firefly Trilogy, is the only choice to play Steve Rockfish. Steve’s a bit Otis Driftwood, part James Rockford and Bill Mosley has the look and the acting chops to play the sarcastic, no-nonsense private detective. Heck, Bill, if you’re reading this, have your people call mine. We’ll do lunch.

Esperanza Spaulding is a Grammy Award winning bassist, singer and songwriter. I don’t know if she can act a lick, but she is Jawnie’s doppelganger with every stoke of the keyboard. Picturing her standing next to Bill Mosely as they play the polar opposite personalities but well-oiled partners is exactly what Netflix or Hulu needs to bring in an avalanche of new subscribers.

Since this is who would play these characters in a perfect world, I think a younger Laura Dern, somewhere between when she filmed Smoother and the first Jurassic Park movie would fit perfectly in the role of Jawnie’s first confidential informant. Laura Dern’s long storied acting resume shows she could handle the range of emotions and growth that this character undergoes throughout the novel.

When you name a character Raffi, there is really only person who can bring justice to the role. Jason Mantzoukas played Rafi (only one f) in the fantasy football comedy The League. If you’ve seen that show, then you know exactly what to expect when Steve Rockfish’s life-long friend from high school, Raffi Perez, arrives on the scene and offers to help. Every one of my early readers asked me, and probably knew the answer already, if I had Rafi in mind when I created Raffi. YouTube “Best of Rafi The League” if you don’t believe me.

Lily Rabe’s role in American Horror Story season 2, as Sister Mary Eunice McKee, served as a jumping off point for the character of Lilith Highchurch. Need a dominant woman character who’s leading a wannabe cult? An apathetic antagonist who doesn’t sweat removing people from every dollar in their bank accounts? I immediately thought of how she brought the role of Sister Mary Eunice McKee to life.

When you need a mean biker type to play the part of an antagonist, Tommy Flanagan role as Chibs on Sons of Anarchy would be my pick to fill Earl Porbeagle’s shoes and then some. The character of Earl, as Lilith’s co-scammer and common law husband, is part cult bouncer and the idea man behind trying to drain every last cent from their rubes, err I mean parishioners.

Now if I can find someone with some pull in the industry to love this series as much as my readers and I do. With eight thousand streaming services and the need for 24/7 content, you’d think someone would reach out and give me that golden ticket. I can’t hold my hand out forever. 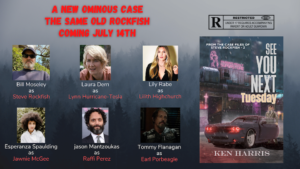 Ken Harris, Author of See You Next Tuesday 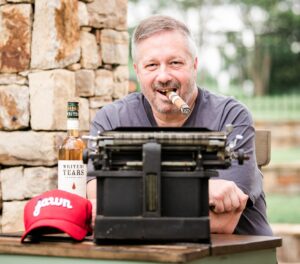 He is the author of the “From the Case Files of Steve Rockfish” series. He spends days with his wife Nicolita, and two Labradors, Shady and Chalupa Batman. Evenings are spent playing Walkabout Mini Golf and cheering on Philadelphia sports. Ken firmly believes Pink Floyd, Irish whiskey and a Montecristo cigar are the only muses necessary. He is a native of New Jersey and currently resides in Northern Virginia.

The Pine Barrens Stratagem published on January, 27, 2022. The sequel, See You Next Tuesday published July 14th and the third in the trilogy A Bad Bout of the Yips is coming March 9, 2023. 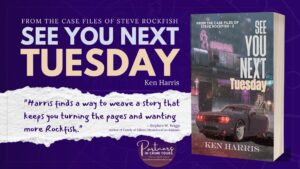