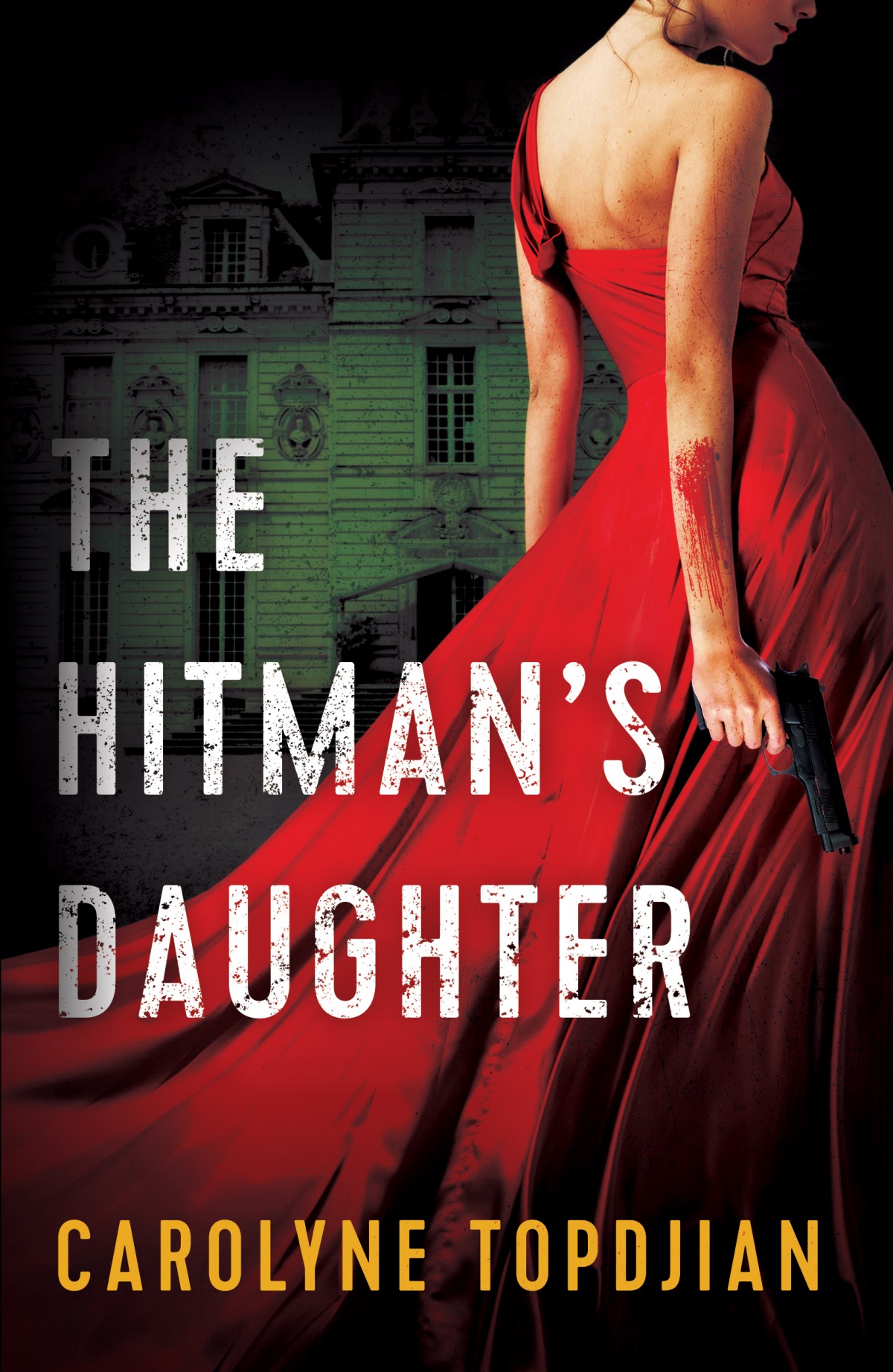 Don’t Miss Any of The ITW Debut Author Interviews! Click the link here.

The Hitman’s Daughter by Carolyne Topdjian 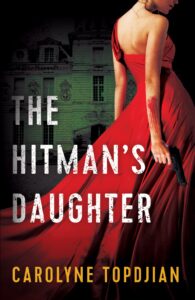 The Château du Ciel was once the destination for the rich and famous to play, drink and ski―complete with a private railway to shuttle those desiring extra privacy―now, however, the guests are few and far between. The New Year’s Eve party was supposed to hoist the rundown hotel back to its former status, until a massive blizzard hits, trapping the guests who’ve come to celebrate the grand hotel’s last hurrah. The circumstances might even be romantic, if the hotel wasn’t reputed to be haunted. When hotel employee Mave Michael finds the resident artist dead, and shortly thereafter hotel security finds Mave alone with the body, the reputation that Mave has fought long and hard to outrun comes back to haunt her. You see, her father is a notorious hitman who is serving multiple life sentences in prison. She has changed her name and location dozens of times, but he somehow manages to track her down―even sending her a postcard on the eve of her birthday, January 1st. She’s the perfect choice to frame for murder, and now the number one suspect. Mave can no longer deny the lessons in survival her father taught her, and calls on that and her uncanny sixth-sense in “finding” lost objects to navigate the maze of the hotel. To save herself, she not only has to stop running from her own past, she must unearth the history of the hotel, its elite guests and buried secrets―one deadly sin at a time. An homage to classic gothic horror, that proves that the ghosts of family and classism are alive and well.

Your debut novel, The Hitman’s Daughter, takes place at the Château du Ciel. What inspired the hotel? Is it based on a real location?

The Château du Ciel is a fictional grand hotel isolated in the mountains of Colorado. It’s rundown, rumored to be haunted, and indeed, is inspired by a mash-up of real hotels I have visited!

In fact, I once had a stint as a shopgirl in a grand hotel/chateau. Till this day, that chateau is rumored to be haunted. Decades ago, it also had a famous resident artist and, further back in history, a train station that linked to the Grand Trunk railway (now defunct). Once I learned this history, I was forever fascinated. The seeds for my novel’s setting were planted then and there, but it wouldn’t be until years later that I actually developed them into the Château du Ciel. I wish it was a real place; I would gladly check in!

Tell us about Mave Michael:

I love gothic fiction, and part of my goal with The Hitman’s Daughter was to abolish this genre’s cliché of the damsel in distress. Enter Mave Michael.

As the title of my novel hints, Mave is the daughter of an incarcerated hitman. She’s raised and trained with a killer’s skill set that makes her both an excellent amateur sleuth and a perfect scapegoat for murder. She’s empowered yet paradoxically, vulnerable given her unusual upbringing. To make matters even more exciting, Mave has a special quirk: she can intuit and locate missing inanimate objects—phone, keys, wallet, eyeglasses.

Misplacing things is a pet peeve of mine, so developing Mave’s sixth sense was extremely satisfying! All together, Mave is my favorite combination of an underdog hero and a social misfit who attracts trouble.

You live in your own haunted house. How does that inform your work?

It’s definitely a source of inspiration for writing gothic fiction.

In fact, as early as page one of The Hitman’s Daughter, hotel guests find themselves rudely awakened by their television sets blaring noise and flickering on around 3 a.m.

Writing this scene didn’t require a stretch of imagination. My T.V. (unfortunately) has had spells of turning itself on randomly at 3 a.m.—and only 3 a.m. We now keep the unit unplugged at night, whereas other devices on that same outlet are fine. During the day, meanwhile, the T.V. behaves itself.

This is just one strange incident of many I’ve encountered in my residence. Over the years, my house has produced a lot of inexplicable anomalies—many of them electrical and always timestamped during the witching hour. It can be quite uncanny if not scary, and overall, that type of emotion feeds my creative energy.

Like most authors, my road to publication has been long and full of rejection.

It was my dream to publish stories from childhood, but being an Armenian-Lebanese immigrant, English wasn’t my first language. I didn’t actually have the confidence or writing chops to query agents until I was much older—in 2016. By then, I’d been learning craft and writing novels for roughly 6 years.

Querying my first manuscript earned me a little under 100 rejections. (I consider these my battle scars!) Then in 2017, I was selected for the Pitch Wars mentoring program. That led me to find my amazing agent.

While my Pitch Wars manuscript was on submission with editors, I wrote and revised The Hitman’s Daughter. At some point, my agent and I decided to switch tactics and sent out The Hitman’s Daughter. When I got the call from my superstar editor, Chantelle Aimée Osman, everything just clicked into place. It was like magic! And now I’m beyond thrilled to have that book out as my debut with Agora/Polis Books.

I tend to read more than one novel at once; mostly because I love to devour first chapters.

Once I get a hold of a book, I often can’t resist flipping open its cover. The next thing I know, I’m hooked. Currently, (in no particular order), I’m reading Our Little World by Karen Winn, This Fierce Blood by Malia Márquez, The Weight of Lies by Emily Carpenter, and Hollywood Down Low by Leigh Paulk. The latter is by my Pitch Wars mentee, and I can’t wait for the rest of the world to experience her sizzling mystery, too.

I’m delighted to share that I’m currently swept up in drafting book 2 of the Mave Michael series. Fingers crossed, readers can expect to see the sequel for The Hitman’s Daughter—tentatively titled The Black Moth—hit bookshelves sometime in 2023.

Simple: it’s going to hurt like hell, but don’t quit. Keep going. First, write from your heart. Then, edit from your head. Lastly, dream with your soul. Whatever the outcome of your writing, there’s no such thing as a waste of time or effort.

Tutti Frutti, in cosplay, reenacting a scene from The Hitman’s Daughter in her Happy New Year top hat. 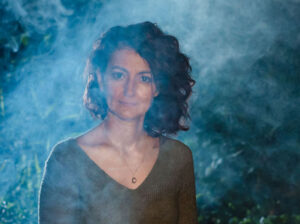 Carolyne Topdjian is the author of The Hitman’s Daughter (2022, Agora/Polis Books), a gothic mystery which Library Journal describes as a “fast-paced, haunting novel of survival” (starred review). In addition to writing suspense novels, Topdjian has published short fiction in PRISM International, Dreamers Magazine, and Firewords Quarterly. She is a professor in the Faculty of Media and Creative Arts at Humber College and a three-time Pitch Wars mentor. She currently lives in a 114-year-old haunted house.