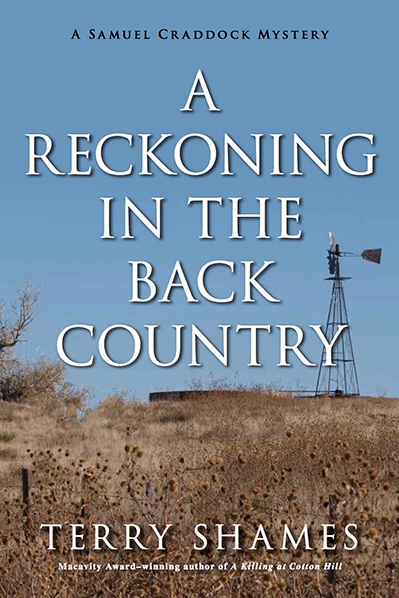 I’m very excited about all the author interviews I have coming up in 2018. And I’m starting off the year with a bang! First up, Terry Shames, author of the award-winning Samuel Craddock series. 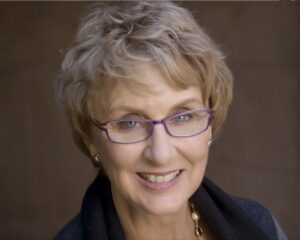 Terry Shames  has been nominated for the Strand Critics award, the Macavity, and multiple Lefty awards (Left Coast Crime). She has won the Macavity Award and recently won the RT Reviews Critics Award for Best Contemporary Mystery of 2016.

She lives in Berkeley, California with her husband and two rowdy terriers.

You have an incredible career history, working in a variety of jobs from Yellowstone National Park to the CIA. Through it all, you’ve been a writer. What inspires you to write no matter what else is going on in your life? (with the exception of time off for parenthood?) 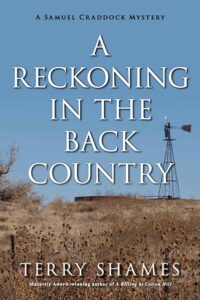 I didn’t mean to imply that I stopped writing while I was in the throes of parenting a child who “needed a lot of parenting.” I always wrote, even then. I just stopped the painful process of trying to find a publisher. So the question: what inspires me to write “no matter what?” “Inspires” is the wrong word. The right question is, what drives me to write? As a child my head was always full of stories. I loved to read and I loved to immerse myself in fantasy.

When I was very young my family lived on a small farm on the outskirts of a small town in Texas. I wasn’t around other kids much and I spent a lot of time in my head. I have no idea whether I would have had as active a fantasy life if I had lived in town and had children to play with every day. But I do know that from an early age, I always felt compelled to write.

Often, when I was working many hours a week, I’d go to my car at lunch and write. At night, no matter how tired I was, I’d scribble down an idea or a few pages of a story. I didn’t always have the stamina to complete the stories, but I realize now that what I was doing was practicing. If I had had more discipline, I might actually have become proficient earlier!

We are both fans of writing about small towns. What draws you to set your mysteries there?

I have written other mysteries that are not small town settings. But when I decided to get serious about writing—in other words, to write a book that would get published—I turned to a familiar setting. Jarrett Creek is based on the small town where my grandparents lived when I was a child—and where my mother grew up. It always held charm for me, partly because when I visited there I was always surrounded by my story-telling family. I would listen to tales told by my relatives, and the stories were always grounded in the area where they grew up. It was about setting.

However, I don’t think “big city” books are really any different. Even in cities, people tend to construct small communities for themselves. Read a book set in Los Angeles, and although the detective may roam far afield, she shops at the same grocery story, goes to the same restaurant, talks to her neighbors, and runs in the same park on a daily basis—just like a small town. I think it’s the intimacy that’s important; not the size of the city.

“Even in cities, people tend to construct small communities for themselves….”

What appealed to you about writing a series versus standalones? Will we see more Samuel Craddock novels?

I can’t remember whether I intended to write a series when I wrote A Killing at Cotton Hill. But as soon as I finished it, I immediately started The Last Death of Jack Harbin. People often remark on how fast I write, but it only seems that way because I had a head start. I had two books written before I signed a publishing contract. So while those were being published, I wrote numbers three and four.

That way, I’ve always managed to be a little ahead of the game. I am working a standalone right now, so it isn’t that I prefer a series, it’s just that once I started the Craddock books, new ones kept coming to me. After I wrote A Reckoning in the Back Country, the latest, I knew what the subject of the next book would be. After that there was a great void. I thought maybe I was done. But then I was challenged by my editor to come up with more, and three more ideas popped into my head.

As a seasoned writer with strong ties to the mystery community, what are some of the most important aspects for you of being a writer?

The most wonderful thing to me is knowing that my books are being read and appreciated. I love getting emails from readers telling me how much they love my books. I also love being part of a community of writers. Around other mystery writers, I can be myself. They understand what it’s like to face a blank page; to have the awful experience of writing yourself into a corner and not know how you will get out of it; who understand the push-pull of being an introverted extrovert or vice versa. But I think the most important aspect of being a writer is the experience of taking a raw idea and at some point realizing that I have nurtured the idea until it has become a full-blown novel. No matter how many times it happens, it seems like pure magic.

“No matter how many times it happens, it seems like pure magic.”

How has the writing process changed for you over the course of your series? Do you find you work differently now than you did when you started? What is your writing process like today?

I wish I could say I had found an easier or better process, but it’s always pretty much the same: start with an idea, keep thinking about it over a few weeks, letting the idea meander where it will, until you think it is an idea that is big enough to be a book. (Some ideas aren’t big enough. Those are the ones that melt away). Then start writing. Write some more. Keep writing. Do it again. And eventually you have a whole bunch of words. Then the real work begins of shaping those words into a coherent whole. That’s called editing: Fluff, chop, fluff, chop some more, and then do it again….and voila! You have a book. Easy, no? I don’t really have a set time to write. I find that the first draft is easier if I tackle it earlier in the day. But editing I can do anytime.

I wrote a thriller that I liked, but that needs a lot of work. I’m questioning whether it’s worth the time it will take to make it into what I want it to be. I also just finished a psychological suspense novel that I have to rethink. I suspect it would be better if it was written in first person. Plus, I wrote an adventure story that I recently revisited and I like it a lot. I realized it needs one major change that is turning out to be easier than I thought. Meanwhile, I’m working on Craddock #8. It’s cooking up nicely.

This fall I went to a week long writer’s retreat. There were a few beginning writers in attendance and I noticed the same thing about them that I had noticed before in workshops—that beginners seemed to worry over details that are best left for the editing phase. For example, someone might become fixated on whether a particular character should sit down before or after delivering a line; or if a description should go at the beginning of a chapter, or later in the chapter. After hearing them massage these things for a while, I finally said, “Listen, it doesn’t matter at this stage. By the time you finish the book, that paragraph might not even be relevant anymore. The important thing now is to keep going and write the damn book.’” This became a catchphrase for the retreat. When someone would start to worry over a tiny detail, someone would suddenly start grinning and we would all say together, “Write the damn book!” So that’s my advice.

The Turncoat’s Widow by Mally Becker