Cartomancy is a fascinating method of divination. Read on for a wonderful guest post by author Emilya Naymark on her own family history with the craft. 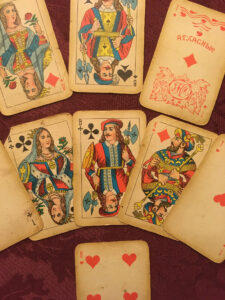 Cartomancy—or fortune telling with playing cards—has been around since playing cards were first introduced into Europe in the fourteenth century. The tarot evolved out of this pastime several centuries later.

This kind of divination arrived in Russia, as many things did, from France in the eighteenth century, spreading widely and becoming the provenance of women across class divides, from aristocratic to peasant. Even communism failed to stomp it out, despite active propaganda against superstition. On the contrary, the wide availability of playing cards during the Soviet era, combined with lack of control over one’s destiny, encouraged a need for a fortune teller in every household. Or at least in each apartment block. At the very least, it was entertainment. But, as my mother later told me, you also had to “read the room.”

I don’t remember a time when my mother did not have a small deck of playing cards tucked away in a drawer, only to remove it and illuminate the future for a friend or relative. The deck she had, and I learned, was a traditional Russian thirty-six card one, with the twos through fives removed.

Women came to my mother asking for a peek into their future. Worried, love-struck, sometimes in tears, they called early or late, and my mom would take out the cards and begin. The cards worked just as well splayed on a table before a person as over the phone. If the person was physically present, they needed to transfer their energy into the cards by touch before the first row came down.

My mother told my future, my friends’ futures, over and over. No matter how often we asked, she’d oblige. Now that I’m a parent, I realize she used this to ferret out what was going on inside our secretive little teenage souls. The fortunes were often the same: you will meet a young man, you will have trouble in school, you will argue with a rival, you will have success in something that matters to you; but it was our reaction, our questions, that gave her as much satisfaction as her answers gave us. 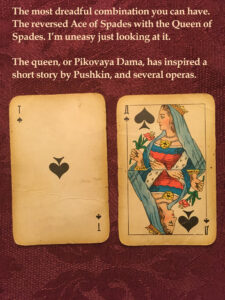 A fortune teller can use many patterns, or spreads, but my mom used a fairly simple layout. The first row contained five cards and the second row interacted with the first, the interpretation changing depending on what crossed or lay on top of what. As with the tarot, the card direction could mean negative or positive outcomes. The Ace of Spades was particularly precarious, forecasting either death or a really, really good party.

I’ve had a few astonishingly accurate card readings in my life, and in all cases, I walked away with the belief in the reader’s gift of intuition. The cards are like a magic wand—they are not the magic themselves. It’s the reader’s ability to understand the querier and human nature that allows for the most intuitive interpretations. This was the first thing my mother taught me. Look at the person sitting in front of you, gather what you know, what you think you know, what they say or don’t say, what they project, and let that guide you.

In a recent survey of science undergrads conducted at a Russian university, forty percent admitted to being a little superstitious, and it’s this tendency to imbue the world with a supernatural resonance that made cartomancy so widespread. Although I’m much more American than I am Russian, I also believe, in a small, not always quiet, corner of my heart, that the universe is more complex than pure science can explain.

When writing my novel, Behind the Lie, the character of Step Volkin came to me nearly fully formed, complete with a dark spirituality and an obsessive compulsion to know the future. I made him part Romany, or, as the Roma people call themselves in Russia, tzigane. The tzigane’s ostensive ability to read cards, palms, tea leaves, coffee grounds, even foreheads has been romanticized in Russian literature for hundreds of years by everyone from Pushkin to Tolstoy.

Who am I to buck tradition?

Emilya Naymark’s debut novel Hide In Place, was out February 9, 2021 from Crooked Lane Books. Her next book, Behind the Lie launches February 8, 2022.

Her short stories appear in the Harper Collins anthology A Stranger Comes to Town,  Secrets in the Water, After Midnight: Tales from the Graveyard Shift, River River Journal, Snowbound: Best New England Crime Stories 2017, and 1+30: THE BEST OF MYSTORY.

She has a degree in fine art, and her artworks have been published in numerous magazines and books.

When not writing, Emilya works as a visual artist and reads massive quantities of psychological thrillers, suspense, and crime fiction. She lives in the Hudson Valley with her family.

A transplant to the upstate New York hamlet of Sylvan, all Laney wants is a peaceful life for herself and her son. But things rarely remain calm in Laney’s life—and when her neighborhood summer block party explodes in shocking violence and ends with her friend’s disappearance, she’ll need all her skills as a PI to solve a mystery that reaches far beyond her small town.

As people closest to Laney fall under suspicion, the local authorities and even her colleagues question her own complicity. And then there’s fifteen-year-old Alfie, her complicated and enigmatic son, obviously hiding something. Even as Laney struggles to bury evidence of her boy’s involvement, his cagey behavior rings every maternal alarm. Laney’s personal life unravels as she’s drawn into her missing friend’s dark secrets and she realizes she and Alfie are in danger.

With treachery blazing hot as the searing summer sun, Laney fights to save lives, her family’s included.

Praise for  Behind the Lie : “Naymark hits the rhythms of small-town life perfectly and maintains tension by alternating perspectives. Lisa Unger fans will want to take a look.” —Publishers Weekly, starred review

Check back on February 9 for my review and our author interview! 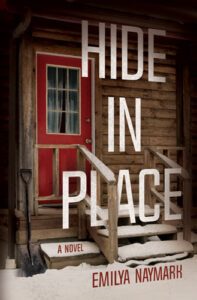 She left the NYPD in the firestorm of a high-profile case gone horribly wrong. Three years later, the ghosts of her past roar back to terrifying life.

When NYPD undercover cop Laney Bird’s cover is blown in a racketeering case against the Russian mob, she flees the city with her troubled son, Alfie. Now, three years later, she’s found the perfect haven in Sylvan, a charming town in upstate New York. But then the unthinkable happens: her boy vanishes.

Local law enforcement dismisses the thirteen-year-old as a runaway, but Laney knows better. Alfie would never abandon his special routines and the sanctuary of their home. Could he have been kidnapped–or worse? As a February snowstorm rips through the region, Laney is forced to launch her own investigation, using every trick she learned in her years undercover.

As she digs deeper into the disappearance, Laney learns that Alfie and a friend had been meeting with an older man who himself vanished, but not before leaving a corpse in his garage. With dawning horror, Laney discovers that the man was a confidential informant from a high-profile case she had handled in the past. Although he had never known her real identity, he knows it now. Which means several other enemies do, too. Time is running out, and as Laney’s search for her son grows more desperate, everything depends on how good a detective she really is–badge or no.

To purchase Hide in Place, click on any of the following links: Amazon, Barnes&Noble, Indie Bound, Book Depository

Quiet the Inner Critic and Learn to #CHILL