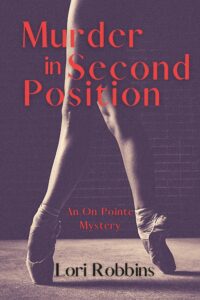 Ballerina Leah Siderova belongs onstage. Not in an interrogation room at Manhattan’s Twentieth Precinct. And yet, for the second time in less than a year, that’s where she has a starring role. It wasn’t her fault someone killed the autocratic new director of the American Ballet Company. And it wasn’t her job to find the killer.

Leah is determined to stay as far away as possible from the murder investigation. After all, if she were going to kill someone, it would have been the woman who’s been relentlessly trolling her on social media. And that’s where things get complicated. Because when dancers say “ballet can be murder” they don’t mean it literally.

Most of the time.

To purchase Murder in Second Position, click on the following link: Amazon

Murder in Second Position: An On Pointe Mystery

Life as a ballerina isn’t all tutus and tiaras. By the end of each day, I’ve sweated off my makeup, starved my way through hours of rehearsals, and fended off challenges by ballerinas young and old. As a thirty-something dancer, I knew the upcoming season would bring aching muscles and blistered feet.

What I didn’t anticipate was murder.

On a typical day, you can find me in class or in rehearsal. Most evenings, I return to my tiny railroad apartment, at the top of a five-story walkup in New York City. My usual dinner consists of a tiny salad that I purchase at the corner deli. Because who has time to cook? I’m excellent at making coffee, but I outsource all other forms of nutrition. My oven is much better used as a repository for tights and leotards. I don’t have to worry about accidentally torching them, because I’ve never attempted to turn on the heat. For the record: I do know how to use the microwave. I’m not completely helpless in the kitchen.

During American Ballet Company’s winter season, I spend my nights under the lights, onstage at Lincoln Center. That’s where I belong. Not facing a spotlight in an interrogation room at Manhattan’s Twentieth Precinct. And yet, on a snowy day in February, that’s where I had a starring role. Opposite me was my old friend, homicide detective Jonah Sobol.

I didn’t do it. While it’s true I had a powerful motive to kill Pavel Baron, the autocratic and sexually predatory director of the company, I wasn’t the only one who feared and loathed him. Yes, I did want him to leave the company. But not in a body bag. Anyway, if I were going to kill anyone, it would have been Savannah Collier. She’s been using my misfortune as fuel for a social media campaign so vicious she makes Genghis Khan look like Winnie the Pooh.

I was determined to stay away from the murder inquiry. One foray into crime fighting was more than enough for me. But when my mother became implicated in the investigation, that changed everything. I had no choice but to call in the best crime fighting team any dancer, or detective, could hope to find. Chief among them is my sister. Nothing, other than a delay on the New Jersey Transit train into Penn Station, could stop her. And then there was Gabi, my best friend, who never let me down. I can’t leave out Madame Maksimova, either. While it’s true her arthritis has slowed her down a bit, she’s a loyal friend and a dedicated ballet teacher, a pretty much unbeatable combination.

I want to include Olivia, my newest friend at American Ballet Company. It’s true we haven’t known each other for very long, but I trust her, as I’ve trusted very few people, other than Gabi.  I wish the others understood how I felt. But they don’t seem to have much faith in her. I’ll admit that Olivia’s taste in men is highly questionable. I tried to persuade her not to get taken in by Jonathan Llewellyn Franklin IV, but she won’t listen to me. Jonathan is, on his best day, a slimy, two-timing, greedy, over-privileged pile of dirt. He’s also a prime suspect. Maybe Olivia will come around. I can only hope so. I’m worried about her.

The person whom the press began calling the ABC Killer remains in the shadows. None of us knows who the next target will be. I’m not sure I can justify putting my friends or my mother in danger. This time, I may have to go it alone.

I know it’s not going to be easy. But with the same fierce determination that enabled me to succeed in this most brutal and beautiful art, I will survive.

The opening book in her On Pointe Mystery Series, Murder in First Position, won the Indie Book Award for Best Mystery, was a finalist for a Silver Falchion, and is currently on the short list for a Mystery & Mayhem Book Award. Murder in Second Position will be released November 23, 2021.

Her debut mystery, Lesson Plan for Murder, won the Silver Falchion for Best Cozy Mystery and was a finalist in the Readers’ Choice and Indie Book Awards. It will be re-released in June 2022. She authored two short stories in 2021: “Accidents Happen” in Mystery Most Diabolical, and “Leading Ladies” in Justice for All. She is an expert in the homicidal impulses everyday life inspires.

Visit all the stops on the Great Escapes Book Tour!

January 12 – Escape With Dollycas Into A Good Book – GUEST POST

The Venturi Effect: A Legal Thriller by Sage Web