Past Grief. Check out my interview with ITW Debut Program Author Edward J Leahy about writing and his novel Past Grief.

Past Grief by Edward J Leahy 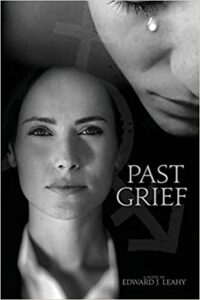 Kim Brady, third generation NYPD, returns to the job after her father’s recent suicide and catches a career-making case-a mass shooting in Manhattan’s Meatpacking District. There is one eyewitness, Leanne, but she can’t come forward because she’s transgender and she fears coming out. Kim resists her lieutenant’s demands to force Leanne’s cooperation for personal reasons.

She’s also being undermined by someone inside the department who is tampering with evidence, threatening the other witness, stalking Leanne.

Kim’s father died under a cloud and her feelings for him are complicated. And as Kim realizes that someone in the department is behind the shooting, her personal feelings clash with her professional mission.

That tension stretches her relationship with her fiancé to its breaking point. The mastermind behind the attack presses Kim’s soft spots to gaslight her. Unraveling the elaborate criminal conspiracy forces her to apply the lessons from her father’s experiences.

To buy the book click on any of the following links: Amazon, IndieBound & Black Rose Writing

Interview with Edward J Leahy, Author of Past Grief

Tell us about your road to publication with Past Grief:

I kicked off my querying process at the Algonkian Pitch Conference in June of 2018. The other writers in the group were enthusiastic, but one editor I pitched blanched at the mention of a transgender character. Over the next six months, I queried agents and attended the Writers Digest Pitch Slam, getting several requests for the full ms, but no interest beyond that.

I realized something was wrong and went back to rework the story with the assistance of David Rich. I had also had two agents, one of whom I consider a friend, tell me I shouldn’t be writing a transgender character because I’m not trans myself (I wondered what made her so sure of that), but since Leanne is central not only to the story, but to Kim’s character, I gave that particular advice the attention it deserved.

In February of 2020, I participated in the Savvyauthors.com Sweetheart Pitchfest, and got an immediate response from Reagan Rothe at Black Rose Writing. Their team has been great to work with.

Kim Brady is a third generation NYPD police officer. How does she feel about following in her father’s footsteps?

Kim’s feelings about her dad are complicated, and they form a significant part of her story.

Her granddad was a hero cop who died in the line of duty. Her dad was a rogue narcotics officer, a fact she didn’t know until she’d already been on the job for over a year. What’s more, her relationship with him had been rocky since she was 10, when her parents divorced and he had treated a friend of hers with cruelty.

Her admiration for her dad (including sharing his love of basketball) was strained for several years as she struggled to forgive him.

The title, Past Grief, is derived from Shakespeare’s The Winter’s Tale: “What’s gone and what’s past hope should be past grief.”

Past Grief is set in Manhattan, why choose such an iconic location? What did you love about setting your novel there?

I’m a lifetime New Yorker (save for 10 years I spent in exile in Nassau County), and I never tire of learning its history.

I picked the Meatpacking District because it’s undergone such a radical transformation, a process that is ongoing. The boutiques and cafes there were once slaughterhouses, and the Belgian block streets shoppers regard as quaint were once thick with meat sludge.

What better setting for such a horrific crime? I picked the scene of the crime first, and everything else about the story flowed from that.

My writing process has evolved, from “pantser” to “plantser”. I still regard the first draft as “telling myself the story”, but the refining process for Past Grief showed me the need for more than just the bare-bones basic planning I started with.

Still, like furniture that has to be assembled, I find it’s best to leave all the bolts loose until the very end.

A few years back, I was at a writer’s conference and an established writer was telling the audience of her process, which involved an EXCEL spreadsheet template which dictated the introduction of subplot #1 after X number of words, subplot #2 after Y number of words, etc. I felt like all the air went out of the room.

The following speaker was Steven James, who started by saying to the speaker, “I know you’re a great writer, and you’ve sold a lot of books, but I just can’t see how anyone could possibly write that way.” And I bought his book, Story Trumps Structure as soon as the session ended.

David Rich gave me an excellent piece of advice: “Yeah, yeah, yeah. I know all about the three act structure. But you’re a basketball guy. Think Russell Westbrook—always pushing, pushing, pushing, Forget walking the ball up the court and passing it off.”

I have just submitted Book 2 of the Kim Brady Series to Black Rose, which, if accepted, will likely be published later this year or early next year.

Words of wisdom for aspiring writers? Mark Twain once said, “It ain’t what you don’t know that gets you into trouble; it’s what you know for sure that just ain’t so.”

That goes double for aspiring writers. Learn the craft and the business. Conferences are great, but not always doable. Covid has done all of us one great service: it has highlighted the utility of virtual events. Groups like ITW and MWA host all sorts of events and programs. Whether in person or online, get to know the folks in your genre and learn all you can from them. Then go write.

Excellent advice! Thanks for hanging out on my blog today, best of luck with your debut!