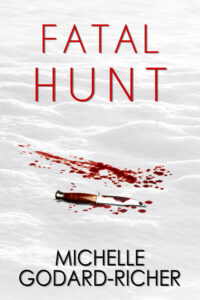 After being widowed and surviving the wrath of a serial killer, Jessica believes her misfortunes are over. She’s reunited with her first love, Jon, and together, with her son Bryce, and a baby on the way, they’re living their happily ever after on their ranch in Montana. That is until secrets, lies, and a formidable foe from Jon’s past emerge to shake the foundation of their relationship, forcing them to flee for their lives.

A decade earlier, Jon worked undercover for the FBI. He infiltrated Hugh Jones’ Kansas City Mob, and almost destroyed his empire. Unaware of the breech in his own defenses, Hugh, obsessed with revenge, unleashes every weapon in his arsenal, targeting those Jon loves the most.

“Fatal Hunt is a spine-tingling romantic thriller I devoured. There are three things I look for in a romantic thriller: a believable plot, engaging characters, and amped-up suspense. This book nails these three elements. The plot is believable and deals with criminal activity ripped from the headlines. The characters are engrossing, and I connected with Jessica right away. Jon has some serious deception going on and it drove the plot. The bad guys are downright evil and I hated them with every page I read. The secondary characters filled out the cast nicely and added an additional level of tension to the story. The suspense was first-rate and Michelle Godard-Richer layered on the suspense through classic methods which kicked up my adrenaline. As I read each chapter, I became so invested in the story and the characters, I couldn’t help but whip through the pages. My heart raced and I couldn’t stop reading. Michelle Godard-Richer has penned a superb romantic thriller and I can’t wait to read more from her. If you’re a fan of this genre, pick up Fatal Hunt. Highly recommend!” —Goodreads review

To purchase Fatal Hunt, click on the following link for multiple outlets: Books2Read

Fatal Hunt focuses on both Jessica and Jon Kent. How did you approach writing two point-of-view characters for your debut?

Both of my main characters had a lot of baggage and they each had their own story to tell, so I actually found it easier to swap perspectives to get into both of their heads.

I also dived into the head of my villain, Hugh Jones.

Fatal Hunt is set on a ranch in Montana. Tell us about the location(s) in the book:

Montana is home for Jon. His family has owned a ranch in Lewistown for generations, and although Jon ventured off to leave small-town living behind, he realized he belonged in Montana.

Jessica also has family ties to the area, so it’s the perfect home for them

Fatal Hunt has a mob angle. What kind of research did you do for your debut?

My husband loves anything mafia related, so after years of watching Hollywood’s depiction of the mob along with documentaries, I had a pretty good grasp on what would be believable.

Tell us about Avenging Angel:

When my editor, Alicia Dean, who is also an author, put out a call for a few authors to join the group of 13 participating in the third collection of Friday the 13th stories, I jumped on the opportunity.

I’m a lifelong fan of horror, so writing my own horror story was a blast. Avenging Angel is also a thriller with a breakneck pace, a serial killer, and a vigilante.

I have two different thrillers on the go. One is a standalone sci-fi thriller, and the other is the third and final book in the Fatal Series.

Connect with other experienced writers and never give up. Rejection is the name of the game, but if you keep at it, someday someone will say ‘yes’.

Great Advice! Thank you for visiting with us and congratulations on your debut!

Michelle has four dogs and one cat.

Bella makes her literary debut in Back in Time with jelly Beans, a travel romance launching in 2023. Hadly and Stan Lee are both rescue dogs, and yes! Stan Lee is named after the famed comic book creator.

One day the boys will have their own stories too. 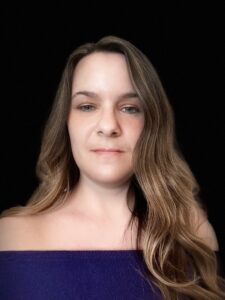 Growing up as an only child in a small town, with only her imagination for company, she dreamed of becoming an author. Her father laughed and said something like: okay, but you might be broke.

She shrugged and kept clacking on the keyboard of her home PC, delighted when her words appeared on the small monitor, a staple of early 90s technology.

In high school, when it was time to decide on a future career, she chose to pursue an Honours Degree in Criminology at the University of Ottawa, but at the back of her mind, the dream of writing for a living persisted.

Fast forward fifteen years, and as a happily married woman and proud mother to two children, four dogs, and a cat, her dream came true.

Header image by kinkate on Pixabay.