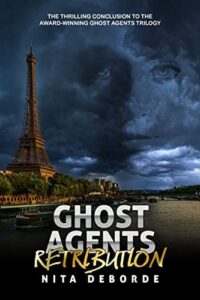 If you enjoy paranormal cozies you are in for a treat. Nita DeBorde’s Ghost Agents series are a unique take on the genre.
~The Book’s the Thing

The Bureau for Historical Preservation is under attack.

The sinister, secret organization known as The Syndicate has finally stepped out of the shadows and made their presence known with a dramatic demonstration. In the aftermath of these shocking events, Claire Abelard and her fellow agents travel to the Bureau’s international headquarters in Paris, France in hopes of launching a coordinated response to the attack.

But something isn’t right with Claire. The acumens she has relied on her whole life have gone haywire, endangering not only the mission but also everything she holds dear. As the scope of the Syndicate’s plan unfolds, Claire must use every resource at her disposal to try to stop them… but will it be enough?

Find out in this thrilling, final chapter of the award-winning Ghost Agents Trilogy.

“Alright, Hugo,” Claire Abelard said, stopping on the sidewalk outside the massive stone building and turning toward the young Bureau recruit accompanying her. “Before we go inside, I want to give you a heads up about a few things.”

“Not exactly,” Claire said with a shake of her head. She pointed to the building in front of them. “This is the Conciergerie, the last remaining section of what used to be a royal palace here on the banks of the Seine River. During the French Revolution, the major trials of the revolutionary court took place here, the most notable being those of Marie-Antoinette and her husband King Louis XVI. They were both held prisoner in cells here for the last months of their lives.” She paused. “Given its history, it’s no surprise that the projections tethered here are… well, let’s just say you won’t be encountering any parties here tonight or any other night.”

“Are any of the projections famous?” Hugo wanted to know.

Claire smiled. “I would say so. In fact, this prison is home to the queen herself.”

Hugo’s brows rose. “Will I be able to meet her?”

Claire weighed her response. “You’ll probably get to see her, but I can’t promise how much interaction you’ll have. While she’s always gracious and polite with Bureau agents, she’s not extremely eager to interact with most sensitives.”

“No, she’s under Bureau jurisdiction. She just prefers not to be interfered with, and for the most part we don’t push the issue.” She smiled sadly. “Given what she went through in the last years of her life, I think she’s earned the privilege of her privacy.”

Claire knocked on the massive wooden door and waited for the night guard to answer. She showed her Bureau badge and exchanged a few pleasantries with the man, then motioned for Hugo to follow her inside.

“How much do you know about Marie-Antoinette?” Claire asked as they made their way through the building’s darkened corridors.

“Just what we learned in school. I know she was Austrian and that she married at a very young age, then became queen just a few years later.”

“My history teacher in collège, what I think you in America call middle school, told us that Marie was not quite the villain that history has painted her to be.”

Claire nodded again. “She made mistakes, of course, but your teacher was right. History has painted her to be a villain, but things are rarely so black and white. Yes, she was an entitled aristocrat who had no idea what life was like beyond her own circle, and that led to some poor choices on her part, but I don’t believe any of her actions were done maliciously.”

Hugo touched one of the stone walls as they passed. “Why would she tether herself here instead of Versailles? This prison is so gloomy, and considering the circumstances of her time here, would she not want to distance herself from this place?”

“I couldn’t begin to tell you why she chose this,” Claire admitted.

“Maybe we could ask her tonight?” Hugo seemed energized by the possibility.

Claire stopped walking and turned to face him. “Unfortunately, that probably still wouldn’t get you the answers you want. Most projections can’t really explain why they chose their tether locations. Sometimes it’s obvious – a significant location from their life. Other times, like with Marie, it can’t be easily explained.” She took a deep breath and let it out slowly. “I certainly can’t speak for Marie, but maybe Versailles doesn’t hold the pleasant memories for her that you would expect. Tethering there might simply serve as a reminder of what she lost and how far they fell.”

They resumed their journey through the darkened corridors, eventually arriving at a large wooden door at the end of one of the hallways.

“Are you ready?” Claire asked the young Bureau recruit.

Claire pushed the door open, revealing a small, sparsely decorated room. To their left, a mannequin dressed in the uniform of a French revolutionary guard stood watch behind a partition. In the center of the room sat another figure, this one clothed in black garments of mourning.

As if in response to the comment, the figure in the center of the room turned to face them.

No matter how many times Claire encountered the energy projection of Queen Marie-Antoinette, she was always struck by the haggard state of the woman’s features. Coupled with her prematurely gray hair, her appearance projected an age well beyond the woman’s actual thirty-seven years, serving as a testament to the hardship she had endured at the end of her life.

“Votre Majestée,” Claire said with a curtsy. (Your majesty.)

The queen responded with a gracious nod of her head and extended her hand in Claire’s direction. “Ma chère, Claire. Je suis contente de vous voir.” (My dear, Claire. I’m happy to see you.)

Behind Claire, Hugo stepped cautiously into the small cell but didn’t directly approach the queen’s projection.

Marie cleared her throat and sat up straighter in her chair. “It is good that you have come this evening,” she told the two Bureau agents, switching easily to English, a language she had learned after years of tourists visiting her space. “The atmosphere here at the Conciergerie is not as heavy as it usually is since tonight is La Toussaint.”

Claire nodded. “Indeed, which is why I’ve brought Hugo with me this evening. He is a new Bureau recruit, and I didn’t feel like his education would be complete if he didn’t have a chance to meet the great Queen Marie-Antoinette.”

Marie smiled and bowed her head again. “Now you are the one who is being kind.” She motioned for Hugo to approach. “Come here, young man. Let me look at you.”

The dim lighting cast shadows around the room, but this in no way hindered the projection’s ability to see. She studied Hugo with a keen eye.

“Why do you wish to become a Bureau agent?” she eventually asked him.

“To be honest,” Hugo said, “it is something of a family profession, so it is expected of me.” When the queen’s eyebrows went up, he quickly added. “But I also think it is important to preserve history.”

“A textbook answer,” Marie acknowledged, “but I feel it lacks passion and conviction, both of which are necessary if you want to be more than just a mediocre agent.”

Hugo looked at Claire, concern etched on his face. She lifted her shoulders in response. He was on his own.

The young Bureau agent swallowed hard. “I do feel passion for this work,” he tried to assure the queen. “I just fear I do not have the experience yet to know how to express my feelings adequately.”

Marie studied him again. “In your chosen line of work, you will need to understand that the projections you assist and monitor can often times be…difficult.” She nodded toward Claire. “I am sure your senior agents can attest to the fact that you will need a deep, personal commitment to your mission if you are to care for them successfully.”

Marie smiled gently at the young man, seeming satisfied with his response. “That is all anyone can ask of any leader.”

With a warm smile, Marie turned her attention to Claire. “I believe the young man will do well.”

Claire nodded in agreement. “So do I.”

Marie took a deep breath and let it out in a heavy sigh. “I am so pleased you came to visit me this evening, Claire. You are always so kind and respectful. The same cannot be said for my usual visitors.”

Claire gave another curtsy. “Merci, Votre Majestée. We are honored that you would grant us a few moments of your time.”

Marie bowed her head graciously, then turned back around in her seat. The visit had concluded.

Claire turned toward the door and motioned with her head for Hugo to join her.

Once they were in the corridor, Hugo let out a heavy breath. “Wow, I never knew I could feel so intimidated by an energy projection.”

Claire chuckled. “She definitely has a presence.”

Hugo reached out a hand and stopped Claire. “I want you to know, I really do have passion for this work. I want to help projections. It is more than just a family business to me.”

“I know,” Claire assured him. “It’s easy to get flustered when you have the former queen of France asking you questions.”

“It definitely is.” He shook his head. “I do not think I will be ready to come back here anytime soon.”

“Well, hopefully our next stop won’t be so nerve-wracking for you.”

“You aren’t going to give me any hints?”

Claire just smiled. “You’ll have to wait and see.” 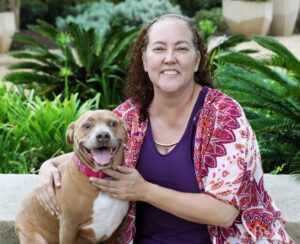 Nita DeBorde is a published author and teacher from Houston, TX. Writing and teaching are her two major passions, though traveling and being dog-mom to a crazy Staffordshire-Boxer mix named Mabel are high on the list as well.

Nita has taught high school French for more than 20 years and absolutely loves her “day job” job (about 95% of the time). She loves to travel, and not surprisingly, France is her favorite destination, though her home state of Texas runs a close second.

She is also a huge history buff, which comes through in her fiction writing, and particularly in her Ghost Agents Trilogy, a collection of genre-defying, cozy paranormal mysteries with a little sci-fi and romance thrown into the mix. Ghost Agents: Retribution, the 3rd book in the Ghost Agents Trilogy, was released on October 22, 2022.

November 18 – Escape With Dollycas Into A Good Book – SPOTLIGHT

A Bride’s Guide To Marriage and Murder