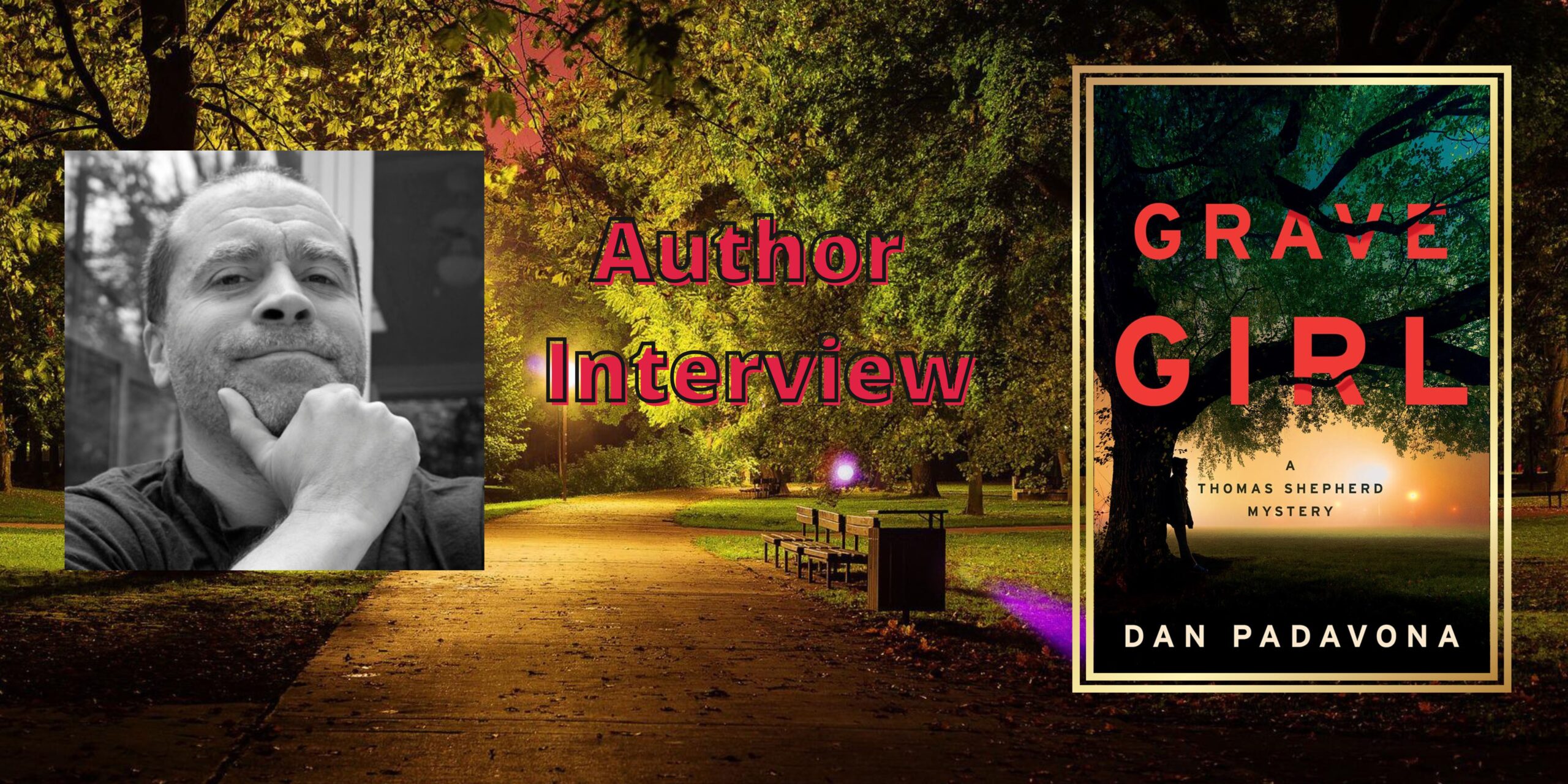 Dan Padavona, a prolific author of thrillers and horror 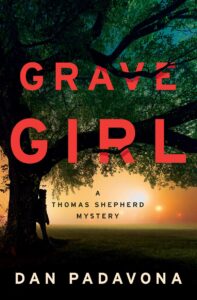 Every mind holds a secret. Some are more deadly than others.

Nightshade County Sheriff Thomas Shepherd is a successful model for every law enforcement officer with autism. He leads an idyllic life in his uncle’s old home along Wolf Lake and is planning to marry private investigator Chelsey Byrd.

But when a star athlete’s girlfriend disappears while camping, everyone blames the boyfriend. He’s volatile and dangerous. Did he murder the girl and bury her in the woods?

The sheriff’s gut tells him there’s more to the story than the boyfriend is willing to admit. The more he digs into the case, the more he worries someone is hiding a dark secret.

Is the boy a killer. Or is he the next victim?

To pre-order Grave Girl, click on the following link: Amazon

You are a prolific author, if someone wanted to start reading from your list, where do you recommend they start?

I recommend readers begin with Her Last Breath, the first novel in the Wolf Lake thriller and mystery series. This series not only represents my best writing, but also who I’ve become. While the Wolf Lake books are tense thrillers on the surface, beneath they are about empathy, overcoming adversity, and the powers of friendship and love.

One of my favorite writers is Dean Koontz, who tells some pretty creepy tales yet always concludes his stories with hope and happiness. I love this combination.

You write a lot of thrillers, but your writing career started with “Storberry,” a bestselling vampire story and you write horror novels as well. How does the process differ for you between writing thrillers and writing horror? If it doesn’t differ, what draws you to writing one genre over another each time you sit down to work on a new novel?

It’s true that I began my writing career as a horror author, and Storberry was essentially a love letter to Stephen King’s Salem’s Lot.

Between 2014 and 2018, I was exclusively a writer of horror. That darkness weighed on me, and I craved deeper characters and storylines. What I love about the thrillers and mysteries I write (and yes, many can be labeled as serial killer thrillers) is that they open up a world of possibilities in my storytelling, yet I’m free to bring elements of horror (tension, frightening imagery) into my stories and give readers an extra thrill.

Significant differences exist between my writing processes for horror and thrillers. When I wrote horror, I typically created the story from the seat of my pants, not planning anything. I allowed my imagination to take me down macabre rabbit holes, and the results were often disturbing. When writing thrillers and mysteries, I utilize “story beats”, which in my case are short paragraphs that I construct for each chapter during the book’s planning phase. I find these necessary, as I often plant clues throughout the story and need to remember them. Story beats keep me focused and spur my daily writing, while giving me creative leeway to let my brain run wild with an idea.

How did growing up near the Finger Lakes region impact you? You still live in New York; do you believe geography imprints and impacts us as writers?

I do. When I was young, our family spent time at Skaneateles Lake, perhaps the most beautiful of the Finger Lakes. Stepping into Finger Lakes country is sometimes akin to entering Tolkien’s Middle-earth. It’s so lush and beautiful during the summer and fall. Without question, the region inspires creativity.

Many of my stories are based in the Finger Lakes. While we live a short drive from the region, I plan to move there in a few years. Thanks to my writing career, I might even be able to afford it, lol.

Grave Girl releases December 27, 2022. It’s the start of another series, the Thomas Shepherd Mystery Series. Tell us about that upcoming book:

Grave Girl and the Thomas Shepherd Mysteries will essentially pick up where Wolf Lake left off. The series will be set in the same location, and readers’ favorite characters will return, though it won’t be necessary for readers to experience Wolf Lake first. The new series will stand on its own.

In Grave Girl, the girlfriend of a famous college athlete vanishes without explanation. As the sheriff digs into the disappearance, he discovers deadly secrets that implicate various suspects.

The first entry in the Thomas Shepherd Mystery Series promises to gripping and tense, while still maintaining the warmth of the Wolf Lake books.

I should also point out that Thomas Shepherd has Asperger’s syndrome, a form of autism. When I wrote Her Last Breath, I figured that would add an intriguing angle to his depth and character. Then I started receiving messages from parents of children on the autism spectrum, thanking me for shedding a positive light on Asperger’s syndrome and demonstrating that it’s a gift, not an affliction. I never meant to carry the torch for autism awareness, but I’m happy my stories have made a positive difference in people’s lives.

Prior to becoming a full-time author, you worked for the National Weather Service. Tell us about that career:

What an amazing 28 years. Since viewing The Wizard of Oz when I was a few years old, I’ve been fascinated by tornadoes and severe weather. I never dreamed I’d one day become a meteorologist.

Originally, I planned to work as a sports broadcaster. During my senior year of college at SUNY Cortland, one semester from earning a communications degree, I realized I’d missed my true calling. After graduating, I applied to Oneonta and earned a second degree in meteorology. The National Weather Service hired me in 1994.

Meteorology is a thankless job at times. It’s a lot of fun, but we all hear the same jokes. “I wish I could earn a living being right 50% of the time.” In truth, our forecast accuracy is better than 90% and improves every decade.

However, the job has its share of warts. Like doctors, emergency officials, the police, and military, we work rotating shifts. We’re also on the job 365 days a year. Our office never closes, whether it’s Christmas or our children’s birthdays. We all sacrifice a great deal. Though I miss the friends I made and the daily challenge of forecasting the weather, I would never go back. Writing has blessed me with a freedom that few enjoy.

Always put your best foot forward. Even if you are just starting out and have little money to spare, hire an editor who understands your genre. The quickest route to poor reviews is to throw an unedited story on Amazon and hope for the best.

I also recommend authors hire the very best cover designers in their genre. Like it or not, readers judge books by their covers. Yours must meet genre expectations and look strong beside the best sellers.

Finally, don’t wait for inspiration. Inspiration is mythical, as is writer’s block. Writers write. Form a habit of writing every day, even if it’s only for fifteen minutes or a half hour. You’ll be shocked by how quickly the pages add up with consistent effort.

Dunes was a special pup. We rescued him from a shelter in Hilton Head, SC. We were never certain of his breed. He looked like a smallish black lab, but we suspect he had pit bull in him and possibly beagle. Dunes lived twelve wonderful years. He lives in our family’s hearts. I even included him in a book last year.

We adopted Ralphie from a pet store. My daughter had wanted a bunny, but when we arrived, I sold her on how much more fun a dog would be. He’s a bugg – half Boston Terrier, half Pug. Ralphie is 14 and ½ and still going strong. We’re very fortunate to have him in our lives.

Peanut is another rescue from Hilton Head. (We used to vacation there every summer) We think he’s 12 or so, but we don’t know. His former owner left him at a groomer and never returned. Peanut is a chiweenie – chihuahua and hot dog mix. He has a bottomless pit for a stomach and would eat us out of house and home if we allowed, and he’s quite the character. 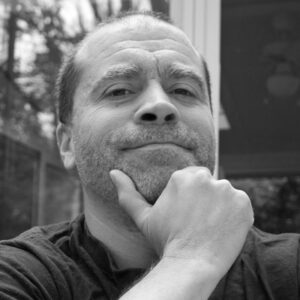 Dan Padavona grew up in Cortland, New York, outside the beautiful Finger Lakes, where he earned degrees from SUNY Cortland and SUNY Oneonta. He entered the National Weather Service in 1994 and later became a forecaster for NOAA. After publishing Storberry in 2014, Dan fell in love with writing and authored nine additional titles by the end of 2017.

When he’s not writing, Dan enjoys photography, biking, weightlifting, and storm chasing. Dan has videotaped tornadoes from New York to Oklahoma and Texas and was nearly swept up by a strong twister outside Sweetwater, Texas. A self-proclaimed ice cream and gelato lover, Dan admits to spending too much time in the gym, compensating for his questionable nutritional decisions.

All We Buried, available now in print, eBook, and audio.

The Foundation of Plot, a Wait, Wait, Don’t Query (Yet!)

Available in print (hardback and paperback) and eBook

Header image from Ferobanjo on Pixabay.