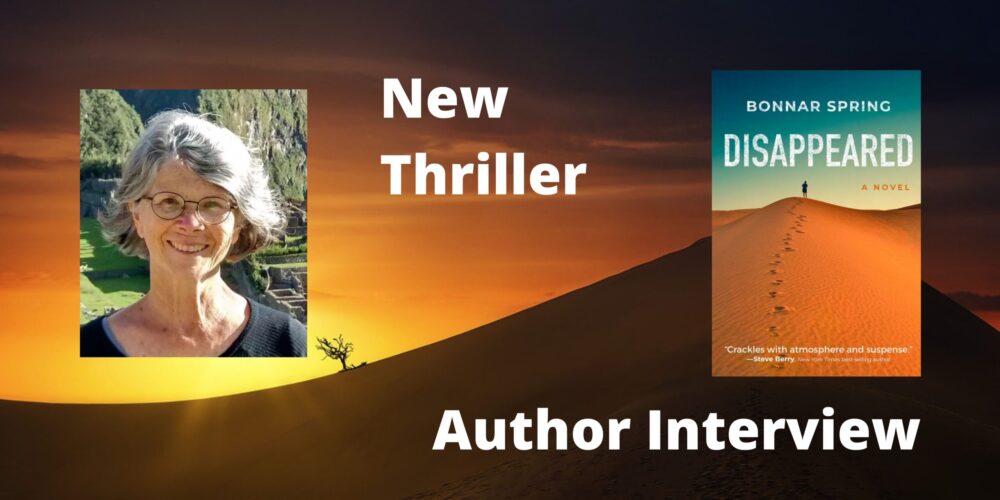 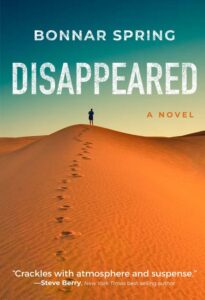 These two sisters are about to be permanently “disappeared”

Julie Welch’s sister, Fay Lariviere, disappears from their hotel in Morocco. Although she leaves a note that she’ll be back in two days, Fay doesn’t return.

Julie’s anger shifts to worry—and to fear when she discovers a stalker. Then, an attack meant for Julie kills another woman. Searching Fay’s luggage and quizzing the hotel staff, Julie discovers Fay’s destination—a remote village in the Saharan desert. Convinced her sister is in danger and propelled by her own jeopardy, Julie rushes to warn Fay.

By the time she reaches the village, Julie finds that Fay has traveled deeper into the desert. With a villager as guide, Julie follows—only to be stranded in the Sahara when the guide abandons her. Julie is eventually reunited with Fay—in a prison cell—and learns the reasons for Fay’s secrecy.

Although furious at Fay’s deception and weak from her desert ordeal, Julie knows they must work together. The sisters, ensnared in a web of dangerous lies and about to be permanently “disappeared”, pit their wits against soldiers and desert in a fight for their lives.

Perfect for fans of Tana French and Martin Cruz Smith

To purchase Disappeared by Bonnar Spring, click on any of the following links: Amazon, Barnes & Noble, IndieBound, Books-A-Million & Google Books

What should readers know about Julie Welch, the protagonist for Disappeared?

Julie grew up as the quiet middle child, lost in the shuffle between an over-achieving older brother (who appears in the story only in flashback) and her sister, Fay, the adorable little sister.

Julie usually called her a suck-up—but when Fay disappears while they are on vacation in Morocco, family ties mean Julie can’t go home without her. Of course, when she learns what Fay was up to, she goes ballistic. Still, they’re sisters.

Disappeared revolves around two sisters. What drew you to writing about that relationship for your second novel?

I had three brothers and always wanted a sister.

No matter all my friends who had sisters regularly complained about everything from sharing a room and ‘borrowing’ clothes to more serious invasions of personal space. My imagination combined their stories of the push/pull of sisters’ relationships with my yearning. Julie and Fay are the result.

Disappeared is set in Morocco, what led you to such an exotic setting?

I’ve traveled quite a bit—from hopping in the car with my mother and brothers for open-ended road trips across the US and Central America to hitchhiking through Europe as a teenager. I taught school in Senegal and trekked to Machu Picchu.

But when I arrived in Morocco on vacation with my best friend, I felt like Dorothy landing in Oz. I’d never been in such a tantalizing place. The spark of idea that inspired Disappeared was a visceral reaction—almost a panic attack—I had when we landed in Casablanca.

My friend’s suitcase never appeared on the baggage conveyor belt so she went in search of information, leaving me in the luggage claim area with our carry-on and my bag. Alone in a milling crowd speaking a language I didn’t understand, I waited and waited . . . What if she was lost and couldn’t find me again? What if something happened to her? What if she disappeared in the airport? How could I find her? How could I even start to look when I stuck with the luggage—which I couldn’t carry by myself and couldn’t leave?

And if I left, how would we ever find one another in this unfamiliar place?

Since I’ve always loved stories that take me ‘away,’ a foreign setting is natural. And by the end of that vacation, a story was born!

Oh, and one big plus about setting Disappeared in North Africa in 2005: Like a lot of writers these days, I need to invent a setting (place and time) where you can’t just pick up your cell phone to get rescued.

You love to travel. How does that impact your writing?

I lie to myself about why I travel. I say I want (as the cliché would have it) to “get away from it all.” There’s a kernel of truth—I like taking a break from daily workouts, escaping long New England winters. Still, I plan seriously involved vacations, not two weeks at the beach with a stack of novels. That always sounds scrumptious, but somehow it never happens.

I end up biking in Cuba or riding a camel into the Sahara . . . because, for me, getting away is only the means to an end. And the end is learning more about who I am when I’m not supported by the norms and expectations of my home culture.

We’ve all had the disorienting experience of driving home from work, only to find ourselves pulling into the driveway with no memory of the trip. Our internal maps keep us from needing to pay attention to most road signs throughout our daily lives.

Now that I’ve got a few novels under my belt, I realize I’m doing the same thing with my characters that I do on vacation. Because I write international thrillers, they often turn up in places they’ve never been before. In addition to not knowing friend from foe, my characters literally don’t know their way around. To meet the challenge of unfamiliar territory, their senses must remain on high alert.

I want my readers to experience my characters’ heightened awareness along with them.

I write every day, if possible in the morning when I have more energy. Also, I often wake up with semi-formed writing ideas, so getting right to it after coffee is best for getting the words/idea out of the either and onto paper (the computer, I mean.)

I recently put the finishing touches on a third thriller, this one set less-exotically in my backyard, the White Mountains of New Hampshire. It’s out on sub right now.

My new project is writing my first mystery, a process I’m finding it much more difficult than thriller-writing.

With thrillers, plotting typically moves ‘forward’ to a ticking-clock climax; in mysteries, because the crime usually occurs near the beginning, the narrative looks backward to unraveling clues . . . clues that, to make unveiling who-done-it fair, the careful writer has larded into the narrative.

It’s a fun story about an abandoned yacht and a couple of star-crossed sleuths, set on a small island in the Bahamas.

Expressions become clichés because they get over-used. These Words of Wisdom are often repeated, but they remain true.

All writing is re-writing.

You can’t revise a blank page.

You have to create (quoting Anne Lamott) your “shitty first draft” and go from there.

Don’t miss any of my author interviews! Click the link here.

A nomad at heart, she hitchhiked across Europe at sixteen and joined the Peace Corps after college. Bonnar taught ESL—English as a Second Language—at a community college for many years.

She currently divides her time between tiny houses on a New Hampshire salt marsh and by the Sea of Abaco.