Shadow of the Gypsy is the latest thriller by Shelly Frome

Shadow of the Gypsy 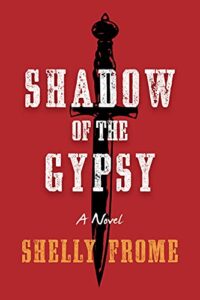 Josh Bartlett had figured all the angles, changed his name, holed up as a small-town features writer in the seclusion of the Blue Ridge. Only a few weeks more and he’d begin anew, return to the Litchfield Hills of Connecticut and Molly (if she’d have him) and, at long last, live a normal life.

After all, it was a matter of record that Zharko had been deported well over a year ago. The shadowy form John had glimpsed yesterday at the lake was only that — a hazy shadow under the eaves of the activities building. It stood to reason his old nemesis was still ensconced overseas in Bucharest or thereabouts well out of the way.

And no matter where he was, he wouldn’t travel south over eight hundred miles to track Josh down. Surely that couldn’t be, not now, not after all this.

To purchase Shadow of the Gypsy, click on the following link: Amazon

Shadow of the Gypsy

Author Interview with Shelly Frome — Shadow of the Gypsy

How did the Shadow of the Gypsy come to you? Story? Character? Concept?

Recollections as a small child of a trauma I experienced, plus something I lost or never had drove this venture along with a debt that was foisted on me I never understood. In addition, looking back to the time when I was around the age of six or seven, there are images of the unattainable proverbial “girl next door” who seemed especially golden and pure.

Tell us about Josh Bartlett:

Josh tried his level best to repress his haunted memories, even to the point of changing his name from Sonny Korda, moving far from the Litchfield Hills south to the Blue Ridge and becoming a features reporter for a small town newspaper.

In this way, he thought he could look at life from a safe remove from anything ethnic and threatening and simply just fit in. In a sense, he hoped to erase his past, soon reunite with Molly, his childhood sweetheart, and return to the idyllic Connecticut countryside of his youth. After all, America is said to be the land of the second chance.

Describe the Blue Ridge for us, how does the environment impact the characters?

Black Mountain is a small mountain town in the Blue Ridge. It affords Josh the feeling of being nestled from the hustle and bustle of even, say, nearby Asheville where you can’t even see the mountains.

Here, there is a palpable slower pace, no one cares where you came from, how affluent you are, where you live or what car you drive. Comparatively speaking, even the folk music played live at the White Horse Tavern or emitting from the radio stations is a far cry from the big city beat of pop songs.

And Amanda, the perky little neighbor, even calls over “Hey, mister Josh, you gonna come see me dance in the County Day School musical?”

In contrast, Zharko is totally unnerved by this ambiance. It causes him to feel even more foreign, out of place and inept. In a hurry to strike as soon as possible and return to his old stomping grounds. On the other hand,  nearby Asheville represents the perfect alternate route to the Florida Keys and the culmination of his insidious plans.

Zharko is a restless, amoral rogue gypsy, a fish out of water so to speak, who learned his trade from the Red Mafia and first got in trouble in his native Hungary with his rolling carnival knife throwing act.

In the ethnic diversity of Waterbury, Connecticut he plied his illicit trade, was deported and has suddenly returned armed with some mysterious hold he has over Josh and Josh’s mother. As it happens, Josh’s nightmares stem from something he witnessed out in the woods during a wintry day that caused Zharko to send Josh packing to a boarding school in the Cumberland Gap of Tennessee.

You are also an actor and professor of theater, how do your experiences in the dramatic arts impact your fiction?

In effect, I play all the characters and allow them to be true to themselves rather than force them to be tools of some predetermined plot outline.

As a result, I am always surprised by some of the things they do and say which, for me, is one of the great joys of writing fiction. It reminds me of what a noted playwright once told me: “I write to discover something deeply meaningful I didn’t realize I already knew.” Only lively characters can lead me to achieve that end.

Along these same lines, the work becomes organic, almost self-generating. My characters aren’t just hanging around off-stage waiting for their cue. They’re always coming from somewhere, affecting in some positive or negative way what happens, always helping to “make a scene” and in most cases make things worse or move things along.

In the same way, no characters appear who are just there to impart some information. They have flaws, a vibrant inner as well as outer life, and will never quit on me because they always have something at stake. They also assure this will not just be another day. It’s as if I’m always asking myself “Why here, why now and so what?”

When you aren’t writing, what are we most likely to find you up to?

I find myself reminiscing about the good ole days in New York when the city seemed so accessible when I first arrived from Miami. A heady time when you could almost afford to be a starving actor, writer, painter or dancer. A period when you could literally find yourself and meet up with all kinds of kindred spirits in Greenwich Village.

Baxter came into my life when my oldest son brought him down from Lake Ontario when he was only eight weeks old soon after my wife unexpectedly passed away.

He’s approximately nine years old, loves to go for a ride at least once a day to visit the nice people who give him dog cookies at the bank, drug store and various other locales.

He loves going for a walk here and there and visiting his pal Tucker, a younger golden doodle, who lives relatively nearby. 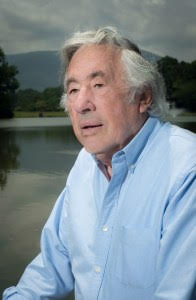 Shelly Frome is a member of Mystery Writers of America, a professor of dramatic arts emeritus at UConn, a former professional actor, and a writer of crime novels and books on theater and film. He also is a features writer for Gannett Publications.

His fiction includes Sun Dance for Andy Horn, Lilac Moon, Twilight of the Drifter, Tinseltown Riff, Murder Run, Moon Games and The Secluded Village Murders. Among his works of non-fiction are The Actors Studio: A History and a guide to playwriting and one on screenwriting, Miranda and the D-Day Caper is his latest foray into the world of crime and the amateur sleuth.

May 2 – The Mystery of Writing – AUTHOR INTERVIEW

May 14 – Escape With Dollycas Into A Good Book – AUTHOR INTERVIEW

Fool Her Once: A New Domestic Thriller