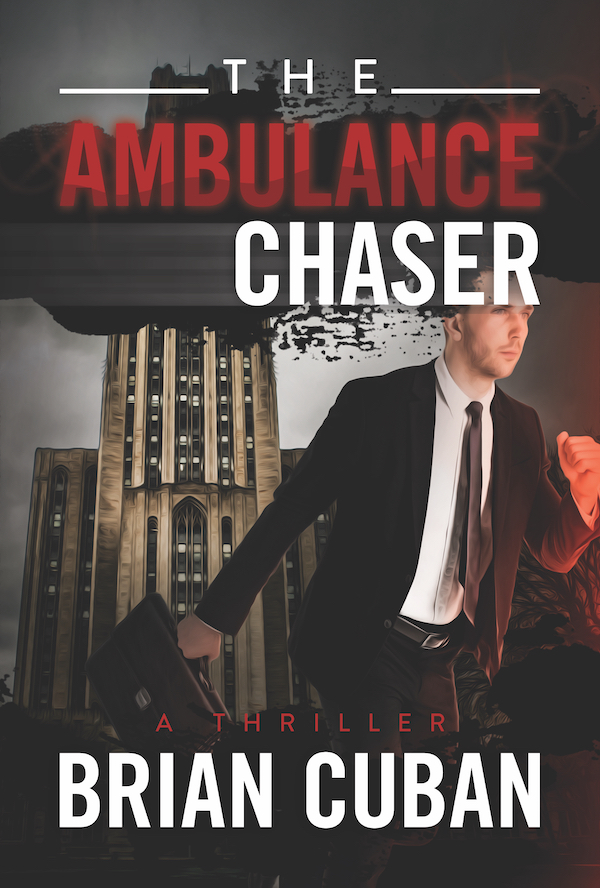 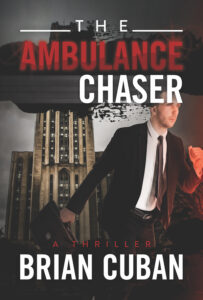 The Ambulance Chaser by Brian Cuban

After being accused of the murder of a high school classmate thirty years prior, lawyer Jason Feldman becomes a fugitive from justice to find the one person who can prove his innocence and save the life of his son.

That all changes when a long-lost childhood friend contacts him about the discovery of buried remains belonging to a high school classmate who went missing thirty years prior, and the fragile life Jason’s built over his troubled past is about to come crashing down.

Soon, he’s on the run across Pittsburgh and beyond to find his old friend, while trying to figure out whom to trust among Ukrainian mobsters, vegan drug dealers, washed-up sports stars, an Israeli James Bond, and an ex-wife who happens to be the district attorney. The only way he’ll survive is if he overcomes his addictions so he can face his childhood demons.

Jason Feldman is your troubled protagonist. Tell us about his situation before the novel starts.

Jason is dealing with cocaine addiction and is an alcoholic struggling to keep his dementia ravaged father in a high-end memory care facility. His personal injury law practice is struggling, as is his relationship with his estranged son and ex-wife, who is the District Attorney

You are quite open and honest about your past drug and alcohol addictions and eating disorder. A lot of those things come into play in your novel. What was it like weaving your own personal demons into a fictional thriller?

As a keynote speaker, I’ve told my story of addiction and recovery many times and it seemed natural to incorporate a similar inner struggle for the protagonist, Jason Feldman.

Of course, the alcoholic lawyer is a fiction trope but there is a real-world reason for it, so it seemed natural as part of writing what I know. The trick was how to make it less trope and more “novel.”

I think I was able to accomplish that with Jason with how he supplements his income.

Like your protagonist, you’re also an attorney. How closely did you recreate the real legal world on the page and how much did you fictionalize for the sake of creating a dramatic story?

It was important to get the legal details correct to maintain author credibility.

While I grew up and went to law school in Pittsburgh, my law practice has been primarily in Dallas, Texas. There were idiosyncrasies to the court system in Pittsburgh I wanted to get right, so I relied on people who practiced law there to help me with those details.

Many of them were former law school classmates who were very gracious in helping me get it right. There is of course, some playing  “what if” and the necessary fictionalization that goes with that for the sake of creating drama.

The Addicted Lawyer and Shattered Image are your nonfiction titles. What were some of the similarities and differences between publishing nonfiction versus a novel?

“I know my story backward and forward and have a solid knowledge foundation in the areas of addiction and mental health,” Cuban says. “When I began writing THE AMBULANCE CHASER, I was a blank slate, and learning as I went.

From a fiction standpoint, I was also fortunate to have some wonderful mentors such as acclaimed novelist Bonnie Hearn Hill with whom I could share my ideas.”

The sequel to the Ambulance Chaser is in the works!

Don’t obsess about the word, “book.” There are people who will help you turn your writing into a “book”. Just start writing.  Like the first steps into recovery, the first paragraph is the hardest. Get it on paper!

Great advice! Thanks for hanging out with us today!

I love animals and two cats, Butter and Mimi.

They are my toughest writing critics! 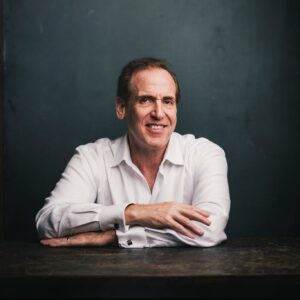 Brian Cuban, the younger brother of Dallas Mavericks owner and entrepreneur Mark Cuban, is a Dallas-based attorney, author, and person in long-term recovery from alcohol and drug addiction.

He is a graduate of Penn State University and the University of Pittsburgh School of Law.

His previous, best selling book, The Addicted Lawyer: Tales of the Bar, Booze, Blow, and Redemption is an unflinching look at how addiction and other mental health issues destroyed his career as a once successful lawyer, and how he and others in the profession redefined their lives in recovery and found redemption.

Brian has spoken at colleges, universities, conferences, non-profits, and legal events across the United States and in Canada. His columns have appeared—and he has been quoted on these topics—online and in print newspapers around the world. He currently resides in Dallas, Texas with his wife and two cats.