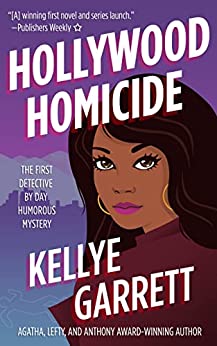 Kellye Garrett discusses her award-winning Detective by Day series and her upcoming standalone. 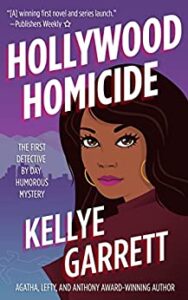 Winner of the 2018 Anthony Award for Best First Novel Winner of the 2017 Agatha Award for Best First Novel Also a Lefty Award Winner and a Barry Award-Nominated Title The Surprise Hit of the Season! Actress Dayna Anderson’s Deadly New Role: Homicide Detective Dayna Anderson doesn’t set out to solve a murder. All the semifamous, mega-broke actress wants is to help her parents keep their house. So after witnessing a deadly hit-and-run, she pursues the fifteen grand reward. But Dayna soon finds herself doing a full-on investigation, wanting more than just money—she wants justice for the victim. She chases down leads at paparazzi hot spots, celeb homes, and movie premieres, loving every second of it—until someone tries to kill her. And there are no second takes in real life.

“A smart, sassy debut, introducing an appealing protagonist with amusing friends.”—Library Journal (starred review) and Debut of the Month

“Veteran TV writer Garrett uses her Cold Case experience to inform her debut, which sets up more than one charming character and isn’t afraid to go cynical on all things LA.”—Kirkus Reviews

“Funny, lively characters populate this new Detective by Day series…this will be an entertaining entry into the amateur sleuth genre.”—RT Book Reviews 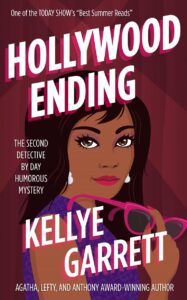 And the award goes to… …Dayna Anderson, the semi-famous actress turned PI who steps up her sleuthing swagger in this follow-up to breakout hit Hollywood Homicide, winner of the Lefty Award and the Agatha Award for Best First Novel! Tinseltown’s awards season is in full swing, and everyone is obsessed with dressing up, scoring free swag, and getting invited to the biggest awards shows of the year. But when celebrity publicist Lyla Davis is killed, the festive mood comes to an abrupt halt. Apprentice private eye Dayna Anderson thinks she’s uncovered the killer. Unfortunately, what starts as an open-and-shut case turns out to be anything but. Diving deeper into the investigation, Dayna gets a backstage look at gossip blogging, Hollywood royalty, and one of entertainment’s most respected awards shows—all while trying to avoid her own Hollywood ending.

“Garrett, who wrote for TV’s Cold Case, brings a smart insider’s view of contemporary Hollywood to this lighthearted series.”—Publishers Weekly

“Day’s funny and determined, the sort of woman who really WOULD make a wisecrack when faced with danger.”—Donna Andrews, New York Times bestselling author of the Meg Langslow series “Kellye Garrett’s Hollywood Ending glitters with stardust. A fun, fast-paced mystery, it’s definitely an A-lister.”—Elaine Viets, author of the Dead-End Job mysteries “Fasten your seatbelts. A star is born!”—Nancy Martin, author of the Blackbird Sisters mysteries “An entertaining whodunit that provides readers a peek behind Hollywood’s star-studded curtain.”—Diane Kelly, award-winning author

Your wonderful Detective by Day series relaunches on December 6, tell us about the journey those books have been on:

I think a common misconception most new authors have is that once they get published, it’s going to be happily ever after. I sure thought I’d just be riding off into the successful author sunset.

I sold my series in a three-book deal to Midnight Ink (which is an imprint of Llewellyn, a mid size publisher.) The first one came out on August 8, 2017. It sold well for them and I was lucky in that it received some major debut mystery awards. The second book came out the next year.

I was writing the third book when a few days before my birthday in October 2018, I got a very surprising email letting me know that Llewellyn was closing the Midnight Ink imprint. Over the course of the next few years they slowly started giving authors their rights back.

I was one of the last people to get my rights. I didn’t push for them right away because I was happy to have the books still available. Finally, in February of 2021, I got my rights back. And I did nothing because I was too nervous to try self-publishing. I knew I’d have to get new covers, etc. But I finally bit the bullet this fall. I was lucky in that a good friend, Ernie Chiara, offered to do the covers for me. I had other really good friends like Gigi Pandian, Marla Bradeen, Julie Hennrikus, and Jess Lourey answer my 5 billion questions about transitioning into indie publishing. And with their help, I was able to get the Day series up for sale.

What should reader know about Dayna Anderson:

I try not to go back and re-read my books but I had to when I was getting the books ready for self-pub. And it felt like I was hanging with an old friend I hadn’t seen in a while. She was exactly how I remembered her.

Dayna is a semi-famous commercial actress at a crossroads in her life when we first meet her. She’s dead broke. She’s lost her car. Has to move in with a friend. Her parents are about to lose their house. And she’s so desperate to help them that she tries to solve a hit-and-run she happened to drive by because the police are offering a $15,000 reward.

In the second book, she’s a P.I. in training and I treat it like learning any new job. She’s not that great at it but she’s determined to learn. Something happens at the end of the first act that makes her doubt herself and I play with that self-doubt throughout the rest of the story.

The books incorporate humor into a murder mystery. How are you able to balance humor with the seriousness of the underlying story?

It’s definitely in the tone of a Stephanie Plum novel, this heightened comedic reality that’s meant to let you escape and laugh for a bit. Obviously murder is a very serious subject, so I did try to treat the victim with respect. I don’t have them die in a wacky way. It’s a hit and run and a shooting at a bank ATM. Dayna takes time to think about how horrible it was for both of these vibrant young women to have their lives tragically cut short.

I also tried to be more serious when Dayna’s scared (and she’s scared a lot because she’s looking into a murder.) She’s very sarcastic. Humor is her defense mechanism when she’s nervous. But it was important not to have her treating violence lightly. She’s not doing comedy bits when her life is in danger. She might crack a joke after but never during.

What roles have you played in the entertainment industry that you draw on for the series?

I was lucky to spend about 8 years working in Los Angeles in television, including spending a year as a staff writer on the show Cold Case. People always hear bout the Tom Cruises and Will Smiths but for every success story there are thousands of people who come to L.A. and never make it. The first book, Hollywood Homicide, deals more with those people. The ones desperate for fame.

The second book, Hollywood Ending, dives more into the lives of the ultra famous though.

Los Angeles is an iconic city. Should readers anticipate seeing the LA they’ve come to expect from TV and film? Or are they going to see parts of LA they may have never been shown before? Maybe a little of both?

Great question. The first book is more everyday L.A. I’m a hardcore mystery reader and I love love love when I recognize a place in a book. So I wanted people to have the same feeling with my books. I lived there at the time, so it was very easy to name drop my favorite Cuban restaurant spot or Mexican soul food. I’ve been back in Jersey for 10 years now so I don’t know if those places still exist., but I sure hope they do because they were all amazing! 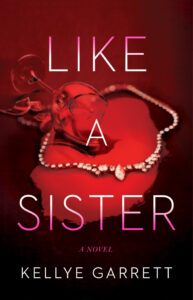 When I couldn’t finish the series after my publisher closed, I decided to do a standalone. Like A Sister comes out on March 8, 2022 from Mulholland Books. Here’s the official description:

“A twisty, voice-driven thriller for fans of Megan Miranda and Jessica Knoll, in which no one bats an eye when a Black reality TV star is found dead in the Bronx—except her estranged half-sister, whose refusal to believe the official story leads her on a dangerous search for the truth.”

Lena Scott is late 20s, sarcastic, and sick of people underestimating her because she’s black & a woman. She’s got Daddy issues to the Nth degree but she’s also super into her family & determined AF to figure out what happened to her baby sister.

I wanted this book to really examine the Strong Black Woman label we tend to put on ourselves (which is different than the Angry Black Woman label folks try to give us.) And how Lena being conditioned to always be a Super Black Woman can be both good and bad.

To pre-purchase Like a Sister, click any of the following links: Hachette Book Group, Amazon, Barnes & Noble & IndieBound

Thank you, Kellye! Fabulous advice. And best of luck with the relaunch of these books and your brand new standalone. Hope to have you back soon.

Kellye Garrett is the acclaimed author of the upcoming Like A Sister (Mulholland Books) suspense novel in which no one bats an eye when a disgraced reality TV star is found dead in the Bronx—except her estranged half-sister, whose refusal to believe the official story leads her on an increasingly dangerous search for the truth.

She’s also the author of the Detective by Day mysteries about a semi-famous, mega-broke black actress who takes on the deadliest role of her life: Private Detective. The first, Hollywood Homicide, won the Agatha, Anthony, Lefty and Independent Publisher “IPPY” awards for best first novel and was named one of BookBub’s Top 100 Crime Novels of All Time. The second, Hollywood Ending, was featured on the TODAY show’s Best Summer Reads of 2019 and was nominated for both Anthony and Lefty awards.

Prior to writing novels, Kellye spent eight years working in Hollywood, including a stint writing for Cold Case. She currently serves on the Board of Directors for Sisters in Crime and is a co-founder of Crime Writers of Color.

Beneath the Marigolds: A New Psychological Thriller