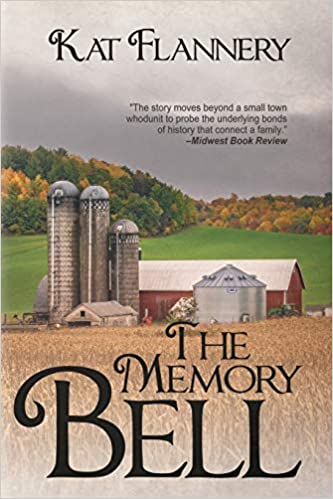 The Memory Bell by Kat Flannery 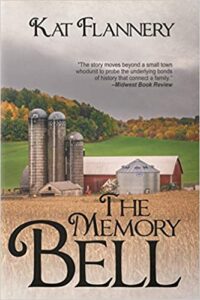 Grace Penner’s safe haven crumbles when a body is found outside of town.

Gifted the memory bell, a family heirloom, from her grandfather’s will, Grace’s excitement is soon squashed when the bell gets broken right after she receives it. While gluing the pieces back in place, she discovers three are still missing.

Determined to find them, she is halted when the new detective, Bennet James, investigates her family. Grace is intent on showing the detective her family isn’t capable of murder, but as the investigation deepens, and pieces of the bell show up with ominous notes, Grace soon realizes the Penners are not what they seem. Amidst the tightly knit family; dark secrets, deception, and possibly even murder unfold.

Will Grace be able to save the family she loves more than anything without losing herself forever?

Praise for The Memory Bell:

“A naïve small-town girl and a disillusioned big-city cop, drawn together by an unsolved crime that is itself only the tip of the iceberg, The Memory Bell serves up the perfect steamy summer read.”
–Jenny Jaeckel, author of House of Rougeaux

“The story moves beyond a small town whodunit to probe the underlying bonds of history that connect a family.”
-Midwest Book Review

To purchase The Memory Bell, click on any of the following links: Amazon | Barnes & Noble | Goodreads

“Family is supposed to be our safe haven. Very often, it’s the place where we find the deepest heartache.”   ~ Iyanla Vanzant

Detective Bennet James stood over the remains of a hand dug grave. The morning air was brisk for July, and a foggy cloud permeated the air as he exhaled. He’d woken as the first rays of dawn crept through his hotel window casting sundogs along the planked floor.

Bones were found by the grain elevators at the mill in Oakville. The sleepy town was an hour’s drive from Chicago and where he’d been stationed for the last two weeks. It was hell, but anything was better than sitting at home waiting to hear his fate. He flexed his shoulders. The muscles ached from the mounting pressure.

He took a sip of the coffee he’d bought at the local gas station. The bitter blend was cold and old. Probably made the night before and just waiting for some poor soul to drain the last of the dregs from the decanter.

With no details other than the presence of human remains to work with, Ben made quick work of taping off the area and closing all access in and out of the mill. The trains were halted and all productivity near the tracks was at a standstill. He surveyed the grounds. Three metal silos stood in a row to his left with tracks laid in front of them. Directly behind were wooden buildings with peaked roofs, and a single track led to a dead end.

He gathered the mill was over fifty years old by the way the boards heaved and sagged. Out of commission for some time, he wondered why no one had torn the dilapidated buildings down. Being that the place was pretty much deserted it’d make things difficult in the investigation. He snorted. It wasn’t his investigation, and if things didn’t work out for him with the state, he’d never see another one again.

He rubbed his hand across his face. His heart quickened with the familiar feeling of piecing together a puzzle. It was the same feeling he got every time he was dealt a new case. Except this one was different. It wasn’t his, and even though the thought of having something to occupy his mind was appealing, he doubted Sheriff Rhoads would let him take the lead on it, much less be a part of it.

Ben glanced down at the body. Nothing left but bones and a few fragments of hair which signified the death happened years before. The grave was not shallow, but not deep either. Ben guessed it was four feet into the ground. A blue blanket caught his eye. He fingered the soft cotton with a gloved hand, a crocheted throw that was now pulled from the knots someone delicately placed there. Whoever had wrapped the victim in it did so with pristine care.

“Where is the witness?” he asked the young deputy standing to his left. He couldn’t remember the boy’s name, or was it he didn’t care? It didn’t really matter. He’d stopped caring about those around him a long time ago.

The deputy looked a bit flushed, and Ben figured the kid living in the small town had never seen anything like this before. Regret settled in his stomach at making the boy stay with him while he looked over the body and its surroundings. Ben remembered seeing his first body, a young girl, no more than six. Her image still haunted him on nights when sleep wouldn’t come.

He blinked, collected his thoughts, and faced the young man.

“The men who found the body are over there,” the kid stammered. His hand shook as he pointed to the two silhouettes standing twenty yards away.

“Thanks.” Ben dismissed him and walked toward the two men sipping coffee from their mugs. A part of him wanted to turn back to his car and leave now that Rhoads was here, but his pride and his duty wouldn’t allow it. He pulled out the small note pad and pen he kept in his pocket.

“Morning. I need to ask you a few questions.”

“Ain’t you the new fella?” one of the men asked.

“You’re that swanky detective from the city.”

“Why in hell would you want to come out here?”

He remained silent. It was none of the old man’s business why he’d been placed in this shithole town.

“Talk is you got into hot water up there.”

“I need to ask you some questions,” Ben repeated, an edge creeping into his voice. He wasn’t about to discuss his shit with these guys. He shifted from one foot to the other, took a deep calming breath, cleared his throat, and waited.

“Not much to tell,” the man said. His thick white moustache spanned the whole of his upper lip and the bottoms of his cheeks.

“Walter Smythe.” The man leaned in to read what Ben wrote and tapped his index finger onto the paper. “That’s Smythe with a Y not an I.”

“Can you tell me how you came upon the body?”

He turned to the other man.

“That’s my dog.” Walter whistled. A large St. Bernard came loping up from the field behind the buildings.

“The dog found the body?”

“What were you doing out here?”

“I come out from time to time.”

“Why if the place is closed down?”

“Have you brought Russ out here before?” Ben asked, still trying to piece together how the remains were found.

“Sure. I bring him everywhere.”

“Why was he in the elevators?”

“Did the dog take anything from the grave, or disturb it in anyway?”

“Once I seen him diggin’, I called him over.” Walter guffawed. “But the damn mutt just kept on going back. So, I went over to see what the hell he was after.”

“At what point did you figure out it was a body?”

“Right away when I saw the bones.”

“Russ dug up most of the grave?”

“Nah, maybe a foot of it.” Walter nudged the farmer beside him. “I called Bill and we determined it was best to call the sheriff.”

“Why didn’t you call the sheriff first?”

“Did you remove or touch anything?” Ben asked.

As much as the farmer was rough around the edges, he could tell Walter Smythe spoke the truth.

“One more question. Has anyone gone missing in the last ten years?”

“Not around these parts. Most people who go missing leave for the city.”

“Small towns ain’t for everybody.” Walter’s eyes narrowed. “Stuff like this don’t happen around here.”

Ben nodded before he walked away and headed back to his car. He opened the door but didn’t get in. Tall silos, train cars and tracks were surrounded by a field. Waist-high stalks of yellow waved in the breeze and from what he knew of farming, it looked to be canola. Why wasn’t the body buried in the field? There must be over a hundred acres of land. Until he received the coroner’s report, he couldn’t begin to guess at anything yet. Before he left, he’d need to talk to Sheriff Rhoads and see about any missing persons reports in the area.

“Well, that is odd.” Rhoads sauntered toward him, brows furrowed.

“A body, here, at the elevators, in Oakville.” His forehead wrinkled, and a perplexed look crossed his face. “Nobody has been here in years.”

“These things can happen anywhere. There are no rules for death.”

Rhoads focused on him, but remained quiet for some time before he said, “Not here.”

“I’d like to take the lead on this,” Ben said. The words surprised him, but he couldn’t take them back now. Besides, he needed something to keep him busy. The minor misdemeanors at the old folk’s home, break-ins, and an occasional kid in trouble wasn’t enough to keep him from going crazy with boredom.

“Not sure that’s wise, with your probation and all.”

Ben nodded, figuring that would be the answer.

“But I don’t see it as more than an unfortunate accident, so go ahead.”

Ben wasn’t so sure. 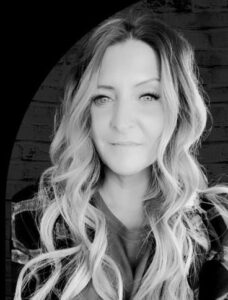 Kat Flannery’s love of history shows in her novels. She is an avid reader of historical, suspense, paranormal, and romance. A member of many writing Kat enjoys promoting other authors on her blog.

When she’s not busy writing, or marketing Kat volunteers her time to other aspiring authors. She has been a keynote speaker, lecturer and guest author inspiring readers and writers at every event she attends. Kat’s been published in numerous periodicals throughout her career, and continues to write for blogs and online magazines.

A bestselling author, Kat’s books are available all over the world. The BRANDED TRILOGY is Kat’s award-winning series.

With seven books published, Kat continues to plot what story will be next. Creativity is in all aspects of Kat’s career. She does Social Media and Marketing for her own career and businesses, writing ads, and other content.

A Writer Finds Compassion for 2019