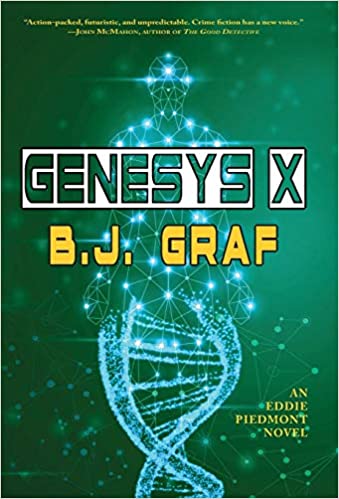 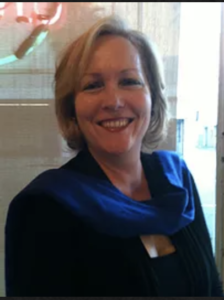 B.J. Graf (aka Beverly Graf) lives in Los Angeles with her family and a menagerie of four-footers.

In her alternate identity Dr. Graf is an Adjunct Professor who teaches Film Studies and Classical Mythology at Pepperdine, UCLA, and CSUN.

Previously, she worked as V.P. of Development for Abilene Pictures where they produced several features and television projects including Primal Fear, Frequency, Fallen, Fracture and NYPD 2069. 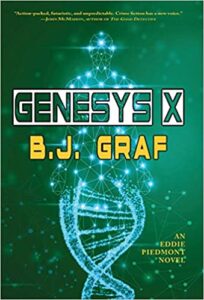 Los Angeles, 2041. Derma ads have replaced skin tattoos; the Nike Swoosh is projected onto the full moon, and digital sponsor logos run along the side of every police sedan. But the city is under siege from a gang war which has flooded the streets with green ice, a drug more powerful and deadly than fentanyl. And there’s a new plague; Alzheimer’s disease has spawned a virulent new strain, Alz-X, that attacks children. No one knows why.

Eddie Piedmont, the youngest Homicide Special detective in LAPD history, has a lot to prove. Growing up with an abusive green ice junkie for a father, Eddie is determined to show he is nothing like his old man who was kicked off the force years ago. When Eddie takes on a case of a fatal overdose, he finds evidence that ties the dead woman to a geneticist working on the cure for Alz-X.

When another suspicious death occurs, Eddie is drawn into the nefarious world of cutting-edge reproductive technology, only to discover terrible secrets at the heart of his identity and his family’s history that will pull him much closer to the murderer than he could ever have imagined.

To buy the book, click on the following links: Amazon & Fairwood Press

“…the patterns of Greek mythology dealing with human frailty still ripple through our society.”

Genesys X combines Greek mythology and noir science-fiction. That’s a fascinating combo, tell us about what that mix is like:

Genesys X is set in 2041 L.A. where genetic technology has advanced from where it is today, but human nature hasn’t really changed much over time, and the patterns of Greek mythology dealing with human frailty still ripple through our society.

But advanced technological society has cut itself off from our wisdom tradition represented by Greek myth, so those patterns go unobserved, even by individuals as clever as my Detective Hero, Eddie Piedmont. That sets him up for the noir side of things.

“…setting the story in 2041 let me have fun with some noirish-near-future sci-fi world building.”

What interested you about setting your mystery in the future?

I set the story in the near-future for a few reasons.

First, I wanted to make the genetic technology credible. With the CRISPR tech, we’re very close today to having that ability, but it’s still a bit of a stretch.

Setting the story in 2041 also allowed me, as a non-police officer, to make some fictional changes in the current L.A.P.D policies and practices (particularly in how Officer-involved-shootings might be handled in the future).

And finally, setting the story in 2041 let me have fun with some noirish-near-future sci-fi world building.

Hence the Nike Swoosh on the lunar surface, the way tattoos have given way to derma ads for products and every stadium, the wearable glove phones, and even police sedans have become digital billboards advertising their sponsors.

The relentless advance of advertising and monetization of products (which today already includes ‘users’ on the internet who are herded towards ads via addictive social media ‘click-bait). I remember when film stars wouldn’t be caught dead doing ads, but it’s been standard for years now.

Advertising is a necessary practice in a crowded marketplace. But like black magic it uses word and image to manipulate people into behavior that often isn’t for the consumer’s best interests. Think of the increasing rates of depression and other mental illnesses we’re seeing in young people who are addicted to social media.

We know these forces can be very destructive, but will we change course? I think all these trends will only increase in the future.

History informs the present as your detective faces his own personal demons during his investigation. What came first, the backstory or the investigation? or did they come to you simultaneously?

Simultaneously. I thought it would be fun and a bit novel to start a mystery with a traditional plot, i.e. the suspicious overdose, and then have the subplot about Eddie’s past flip things and eventually subsume the plot itself.

“My film background makes me very aware of visual story-telling and also constantly anxious about pacing.”

You also have a background in film, both in the industry and as an academic. How does that inform your writing?

My film background makes me very aware of visual story-telling and also constantly anxious about pacing. I know people have shorter attention spans than we used to.

My film students find watching older films difficult because the language of the camera (we now use many more close-ups and extreme close-ups for example) and the pace of editing is so different.

“The dream has become reality.”

Tell us about your road to publication.

The germ of the story first came to me when I was a graduate student of the Classics studying for my PhD. But I didn’t have a lot of confidence about my own writing abilities, and via my film development and then academic teaching career, I spent many years helping others get their stories told instead of writing my own.

But this story had its teeth in me, and wouldn’t let go. So, finally I wrestled it onto the page. I joined a writers’ workshop (we meet every Saturday) and did several rewrites.

Then I went to Thrillerfest to pitch to literary agents. Twice.

I sent the manuscript out to interested agents, and just when I was about to give up and move on to the next book I’d already written, I heard back from my wonderful literary agent Sandy Lu.

She sent Genesys X out and we found our fabulous publisher, Fairwood Press. And now the book will be published 11/10/2020. The dream has become reality.

I have written a couple more short stories featuring Detective Eddie Piedmont and his partner Shin Miyaguchi (both already published this year in the CROSSING BORDERS and MYSTERY MOST THEATRICAL anthologies) and have started another E.Piedmont novel.

But I have already written the first volume of an epic fantasy trilogy called THE SHADOW WEAVER set in Bronze Age Greece in the last year of the Trojan War. While the heroes of the war are very active in the story, the trilogy focuses largely on Penelope and her cousins, the sisters Clytemnestra and Helen and their very dysfunctional families as they deal not only with the politics of that global palatial world, but with the supernatural forces at play.

Don’t give up! Also, when you are rejected, and you probably will be before you succeed, don’t let depression swamp you. Take action instead. Rewrite and send out material the same day you’re rejected.

BJ’s beloved but deceased pooch Luddy who succumbed to cancer earlier this year and some of the fabulous felines who have inspired her to add fictional counterparts to Genesys X.

Jo’s a cat person, and Eddie, who is initially more of a dog person, learns to open his heart to the cats. 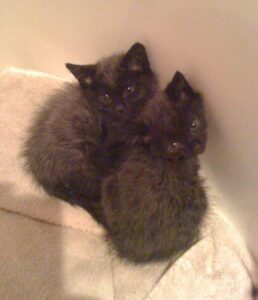 The baby/kitten pictures are of two formerly feral litter mates and also a pic of the rescue cat who became ‘Wolsey’ in the story (since he is handsome, charismatic, but also greedy and a bit of a bully like the Cardinal who is his namesake). 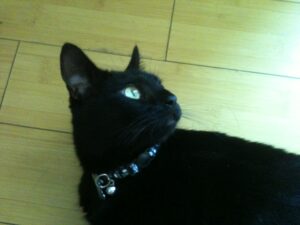 The felines all prefer to remain anonymous to protect their secret identities.

Thank you for sharing your writing journey and your wonderful animals with us!

The ebook is on sale for $1.99 during the entire month of November!