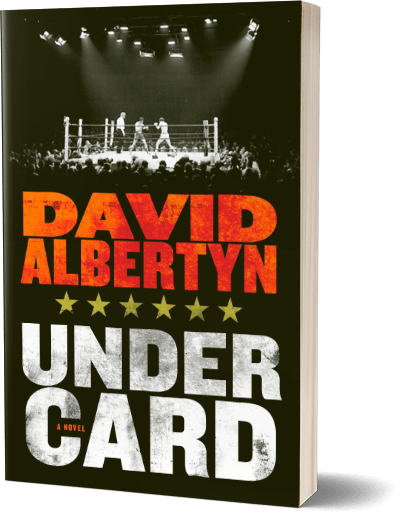 “David Albertyn’s fast-paced thriller combines a dynamic plot and compelling characters to deliver a one-two knockout punch. Undercard is not to be missed.” — Elena Taylor, author of All We Buried

It was my honor to write a blurb  for this fabulous novel by author David Albertyn. I’m even more thrilled to have him on my blog today as a guest blogger to coincide with the US release and Audio launch of his dynamic debut.

To read more about David, catch my interview with him during the international launch of his debut novel Undercard, click the link here.

On Tuesday, June 2, my debut novel Undercard, came out in the United States. The book takes place over 24 hours in Las Vegas and follows four estranged childhood friends all back in their hometown on the same day, their lives converging and conflicting. It deals with boxing, casinos, corrupt cops, and revenge. It also deals with the police killing of an unarmed Black teenager and a protest against the not guilty verdict of the cop in question, Keenan Quinn, one of the four main characters.

Undercard came out in Canada over a year ago. It came out in Germany in December. And in France in March. But it came out in America, where the novel is set, a week ago, on Blackout Tuesday.

Undercard came out in Canada over a year ago. It came out in Germany in December. And in France in March. But it came out in America, where the novel is set, a week ago, on Blackout Tuesday.

The timing is uncanny.

There is an inherent insecurity in almost every writer, I believe, when they expose their work to the world, regardless of what that work contains. One of the skills a writer must develop is a thick skin, and also a detachment of sorts to their writing once it is its own book, open to the interpretation and judgement of anyone who picks it up. But I imagine there are levels to this.

It is a strange experience having a book release you have been building toward for a year and a global pandemic hits right before the culmination. It is even more strange to be a white writer who has tried, within the context of a riveting thriller, to tackle the issues of inequality and excesses of power, and by extension racial injustice and how police and security forces are used to divide cities, and then all these issues are thrust into global prominence right as the book hits its largest release.

In October of 2017, my agent and I had a meeting lined up with a publisher to talk about possibly acquiring my manuscript Undercard.

So far everyone had responded to my new novel Undercard, which contained in it a scene where a sniper shoots out of a Las Vegas casino resort hotel room window onto a crowd of people below. This time things would be different. This time I would cross that threshold and become a published author.

Four days before this meeting, I saw my mother in the morning and she was weeping like I had rarely seen. My heart froze. I thought, which of our relatives has died? She said there has been a mass shooting in Las Vegas. The worst one yet. And it’s exactly like your book.

It is strange to write a scene of violence and then have that scene play out in real life in almost exactly the same way, only instead of two people being killed, like in your scene, 58 are dead.

I spent the rest of the morning reading and watching the news, and like my mother I wept. It is strange to write a scene of violence and then have that scene play out in real life in almost exactly the same way, only instead of two people being killed, like in your scene, 58 are dead.

A mass shooting is always a tragedy, even if there is a distance between you and it. But somehow, having written this scene and then have it play out so atrociously, I felt connected to this terrible event in a way I hadn’t with the others. I questioned my role as a writer. What did it mean to write scenes of violence? What did it mean when that violence occurred in a story meant to entertain people? I couldn’t entirely pinpoint nor articulate the strange new emotions that came over me.

The publisher wanted the book but believed that we had to change this scene, as everyone would assume it was a reference to the Vegas mass shooting and not written prior. I agreed with them, and from a stylistic and story perspective I prefer the scene that has replaced it. I signed with them and realized my dream of becoming a published author.

Now in another crucial professional moment, Undercard again resembles the biggest story in the world.

Now in another crucial professional moment, Undercard again resembles the biggest story in the world. And again I find myself experiencing strange feelings that I cannot fully decipher. Again I question my role as a writer. It feels strange, in this moment, to publicly discuss what the book is really about, beyond its more entertaining aspects, but it would also feel strange to shy away from the connections to the present Black Lives Matter movement that are so plain to see, a movement that I have been researching and have believed in for years.

I’m not a believer in fate, even if it does feel like there is something connecting this book, my life, and the entire world. I have been writing about the need for greater equality in the world since the 2000s, and I believe that it is only a coincidence that it took this long for my writing ability to develop enough to be published in this time.

So I suppose what I am trying to say is that it is a strange and uncertain thing to be a writer. But no matter how strange or uncertain, I still believe that there is great value, even a responsibility, to engage with issues of real importance in novels. Even thrillers.

David Albertyn was born in Durban, South Africa in 1983. His father was involved in the anti-apartheid struggle, and for his efforts was served a banning order by the apartheid government for five years. From a young age David learned the importance of standing up to injustice even if you are not on the receiving end of that injustice.

David began writing stories when he was six years old. In his final years in South Africa he was taken by Tolkien and Greek and Norse myths. In Canada he was introduced to Michael Crichton and Frank Herbert. David read, and re-read, these early influences voraciously, trying to emulate the thrills, wonder, and vast scope he experienced in these stories in his own writing.

At Queen’s University, pursuing a Film Studies major, he enrolled in creative writing courses that significantly developed his writing ability. His writing was further developed in the Humber School for Writers’ Creative Writing program, where he received a Letter of Distinction.

As an adult he was inspired by the content of works by Chinua Achebe and Ngũgĩ wa Thiong’o, and the style of works by Hilary Mantel and JM Coetzee, while trying to maintain the entertaining, dynamic, and epic qualities of his earlier influences. David’s goal is to write visceral stories that are both thrilling and meaningful.

When Tyron Shaw returns to his hometown of Las Vegas after eleven years in the Marines, he’s surprised to discover that two of his best friends from childhood are all anyone is talking about: Antoine Deco, three years out of prison, hasn’t lost a boxing match since his release, and tonight is fighting in the undercard to the fight of the decade; and Keenan Quinn, a police officer who killed an unarmed teenager and escaped punishment from the courts, is the subject of a protest tomorrow morning.

Tyron has trouble reconciling either story with his memory of these men, and the situation escalates when he runs into the love of his life, Naomi Wilks, a retired WNBA player, basketball coach, and estranged wife of Keenan. As Tyron reconnects with his old community, he will learn over the next twenty-four hours that much has changed since he left Las Vegas . . . and there is much more that he never understood.

To buy the book, click on any of the following links, or order from your favorite bookstore: Amazon, Amazon Canada, Barnes & Noble, Indigo, and IndieBound