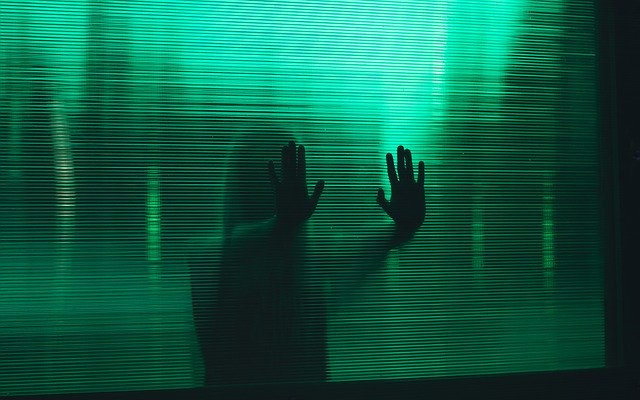 From Literary Horror to a Hitwoman, this debut novelist kills.

The International Thriller Writers’ Debut Author Program runs from July to July, so if a writer’s debut novel comes out after the dates of ThrillerFest, they become a debut for the following year. That sometimes means an author is a debut when they have a second book coming out. I’m thrilled to introduce you to debut author C.S. O’Cinneide and both her debut and her second novel, coming out March 10 and available for presale.

Wondering what you’ve already missed on my blog this year? Check out my other posts by clicking the link here.

C.S. O’Cinneide (oh-ki-nay-da) is a writer and a blogger on her website, She Kills Lit, where she features women authors of thriller and noir.

Her debut novel, Petra’s Ghost was a semi-finalist in the Goodreads Choice Award for Horror in 2019.

Her second novel, The Starr Sting Scale, is a witty noir, and first in a crime series featuring semi-reformed hitwoman, Candace Starr.

O’Cinneide lives in Guelph, Ontario, Canada with her husband, an Irish ex-pat who remains her constant muse. 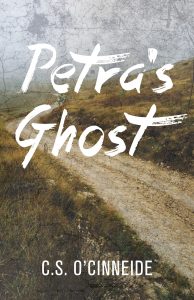 A woman has vanished from the Camino de Santiago, the ancient five-hundred-mile pilgrimage that crosses Northern Spain. Daniel, an Irish expat, walks the lonely trail, carrying his wife Petra’s ashes, along with the damning secret of how she really died.

To buy the book: IndieBound and Amazon 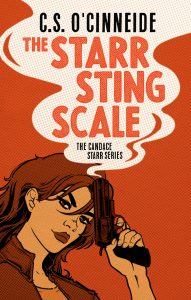 Candace Starr considers herself retired from the world of professional hits since she got out of prison.

That’s until a society maven wants her daughter’s boyfriend removed from their lives permanently.

When he shows up dead, Candace has to help the cops catch the killer, even though it just might be her.

Available for presale: IndieBound and Amazon

Tell us about your experiences publishing your first book and how it differed with the second:

Petra’s Ghost got a great deal of attention from very early on. Seven months before its release in July 2019, it began showing up on “Most Anticipated” lists.

Last fall it was a semi-finalist for a Goodreads Choice Award. In all these cases it was categorized as horror, even though the book was promoted as literary.

That was a real shock.

But since the main character gets stalked on the Camino de Santiago pilgrimage by a woman who is slowly decomposing, perhaps I should have expected it.

The Starr Sting Scale, while getting some great reviews from major outlets like Publishers Weekly  has been quieter in the lead-up to its release for February 2020.

It’s a very different book, a tongue- in-cheek noir, about a six-foot-three hitwoman named Candace Starr. I still laugh out loud when I read it. It is definitely not literary, but it is crime fiction, where the market can be very competitive. Not that all markets aren’t competitive!

Love strong female characters? Read about a Modern-Day Ninja and her debut novel.

What inspired you to write these novels?

When I came back home from walking the Camino de Santiago in 2015, I wanted to write a book about the experience.

Unfortunately, you couldn’t swing a cat in a bookstore without hitting a Camino memoir. But what about a thriller? And so, the idea for Petra’s Ghost was born.

Sadly, a woman did vanish from the Camino trail when I was walking it. Her real-life story did not end well. But she was on my mind as I hiked those five-hundred miles. So, it is no surprise that a woman’s disappearance, along with the stunning landscape of Northern Spain, set the backdrop for my novel.

The inspiration for The Starr Sting Scale is a funnier story. Much like the book. I had sent my first book (Petra’s Ghost) to one agent, who had read it and replied “Characters are phenomenal. Writing is strong. But it’s not commercial enough.”

It sounds silly, but I was so angry. I sat down at my computer and said, “I’ll show you $&**! commercial!” I ended up writing The Starr Sting Scale in a month.

It’s dark but filled with satire. It grew out of a short story I wrote where a mother tries to hire a hitwoman (Candace Starr) to rub out her teenage daughter’s no-good barnacle of a boyfriend. I have three daughters. I don’t think I need to outline to you the inspiration there.

I am working very hard on the final draft of a novel with the working title, EVE’S RIB. It is more literary in nature, like Petra’s Ghost, but also with a smattering of magical realism. I think it is my best writing yet.

But I am also working on the next book in the Candace Starr crime series. This one will feature Candace’s blood relations in the mafia, and team her up with an agnostic Sikh who has some very useful computer skills. It comes out in February 2021.

You have an amazing writing history! I love the idea of a hitwoman.

Congratulations on all your success!

Header photo by sw_reg_03 on Pixabay. Click the link here for more information.