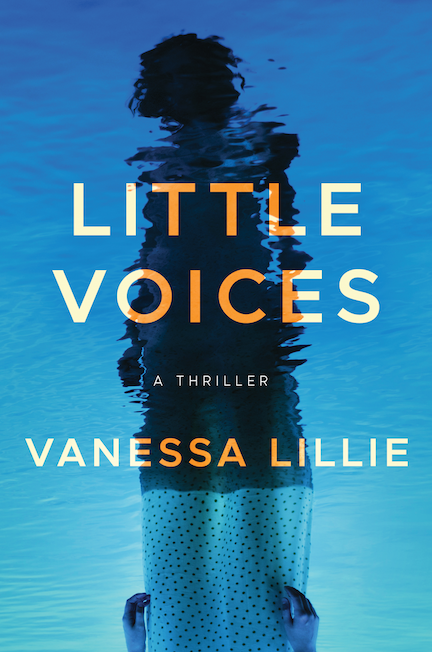 Ever wondered if a NaNoWriMo project can get published?

Debut author Vanessa Lillie’s NaNoWriMo project became her first published novel. But was it her first attempt? Read further to find out about her publishing journey.

Want to learn more about the querying process to help you on your publishing journey? Read one of my posts about querying by clicking on the link here.

Vanessa Lillie is an Amazon bestselling author of the thriller debut, Little Voices. She’s originally from Miami, Oklahoma, where she spent a lot of time investigating local ghost stories at the public library.

After college, she worked in Washington, DC, until moving to Providence, Rhode Island, which she calls home with her husband and dinosaur-aficionado son.

Smitten with the smallest state, she enjoys organizing book events and literary happenings around town.

On the night Devon almost dies giving birth, her friend is murdered.

Back home from the hospital, Devon is struggling with postpartum, and hearing a cruel voice in her head.

But she as returns to her skills as an attorney to investigate, justice becomes an obsession, one that leads Devon, baby in-hand, down a dangerous path directly to the killer.

To buy the book click on either link: Amazon and IndieBound

The ebook version is on sale for just $1.99 through the end of January!!

This was definitely not my first manuscript or first project I queried to find an agent. I worked on two books over ten years, one I queried extensively, getting about 150 passes from agents. I took a little time off to have my son, and then this story arrived.

“I wrote it as a National Novel Writing Month project and edited it over a year.”

I wrote it as a National Novel Writing Month project and edited it over a year. Pretty quickly after that, I found my amazing agent, Victoria Sanders, from her slush pile and Victoria connected me to a wonderful home for my debut and next book at Thomas and Mercer at Amazon Publishing. When Little Voices debuted, I’d been trying to be published for fourteen years.

“Little Voices is a dark love letter to the smallest state.”

I really wanted to find a place to explore my feelings about motherhood within my favorite genre, a thriller.

I had complex and often contradictory emotions as an exhausted new mom. A thriller with a woman who is suffering postpartum, but still finds the courage to seek justice for her murdered friend was a plot I had a really longing to follow.

The other element that’s almost as prominent as new motherhood is Rhode Island, a place I’ve lived for eight years and absolutely fell in love with. Little Voices is a dark love letter to the smallest state.

My next thriller, For the Best, is about a nonprofit CEO whose wallet is found next to a murdered man.

She’s the only suspect and her life falls apart, so she starts a vlog to clear her name.

The deeper she digs, the more dirt she uncovers about the murder and herself. Unexpected truths pile up until she’s buried so deep even finding the killer might not be enough to set her free.

Both your books sound amazing – definitely putting these on my TBR list! It’s great to learn about a NaNoWriMo project that went the distance from draft to Amazon Bestselling novel.

Thanks for hanging out with us.

The Perfect Escape: Perfect For A Winter Read

Her Dying Day by Mindy Carlson