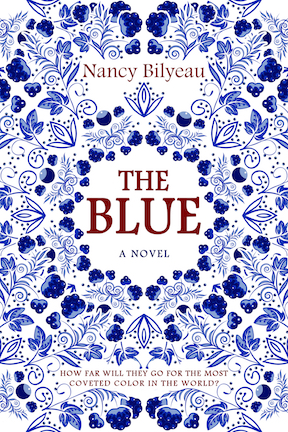 Don’t forget to add this to your Want to Read list on Goodreads. Better yet – get it now and add it to your Reading Challenge!

Nancy Bilyeau has worked on the staffs of InStyle, DuJour, Rolling Stone, Entertainment Weekly, and Good Housekeeping. She is currently the deputy editor of the Center on Media, Crime and Justice at City University of New York and a regular contributor to Town & Country, Purist, and The Vintage News.

A native of the Midwest, she earned a bachelor’s degree from the University of Michigan. The Crown, her first novel and an Oprah pick, was published in 2012; the sequel, The Chalice, followed in 2013. The third in the trilogy, The Tapestry, was published by Touchstone in 2015. Her fourth novel, The Blue, launches December 3rd.

Nancy lives in New York City with her husband and two children. 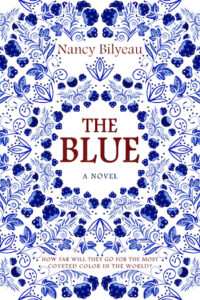 In eighteenth century London, porcelain is the most seductive of commodities. Fortunes are made and lost upon it. Kings do battle with knights and knaves for possession of the finest pieces and the secrets of their manufacture.

For Genevieve Planché, an English-born descendant of Huguenot refugees, porcelain holds far less allure; she wants to be an artist, a painter of international repute, but nobody takes the idea of a female artist seriously in London. If only she could reach Venice.

When Genevieve meets the charming Sir Gabriel Courtenay, he offers her an opportunity she can’t refuse; if she learns the secrets of porcelain manufacture, he will send her to Venice. But in particular, she must learn the secrets of the colour blue…

The ensuing events take Genevieve deep into England’s emerging industrial heartlands, where not only does she learn about porcelain, but also about the art of industrial espionage.

She also learns much about love.

With the heart and spirit of her Huguenot ancestors, Genevieve faces her challenges head on, but how much is she willing to suffer in pursuit and protection of the colour blue?

Amiability has never been counted more important in a woman’s character than it is today. Which is why I’m twenty-four and unmarried and without friends or employer, only a grandfather for company. It doesn’t matter. Ambition consumes me, an impossible one. It’s what delivers me into the back of a hackney carriage on this December night, holding a party invitation that doesn’t bear my name as I make my way from Spitalfields to Leicester Fields.

My grandfather and I live on Fournier Street, one of the most respectable in Spitalfields, a street where, never mind the longing and greed and fear that nibble at the souls of a good many neighbors, all say their prayers after supper and snuff the candles. Not so along the route through London to Leicester Fields. From my swaying carriage, I see lights leaping in many windows and hear the shouts and the laughter. London is alive, and so am I.

After more than an hour, the carriage jerks to a stop as it is has many times. But on this occasion, it’s not in order to allow another to rumble forward. Thump, thump, thump. The driver pounds his stick. I’ve arrived.

As I step down, I catch sight of handsome houses rising along each side of the square, illuminated by coal-lit street lamps that stand to attention like tireless soldiers. The largest by far is Leicester House, tucked behind a courtyard, containing whichever Prince of Wales is presently draining the country of gold with his peevish schemes. I know from the newspapers the names of some of the other residents, wealthy doctors and striving merchants and low-rung nobles. But now is not the time to gawk.

I’m not sure what I expected from Hogarth’s London home. The solid terraced building, third from the left on the southeast corner, gives no outward evidence of artistic genius. Yet I know I’ve come to the right place, by the lights bursting from the windows and the roar of many voices. This is the man’s Christmas party.

I fully expect the servant at the door to give me trouble. Raising my chin, I try to look as if I belong in the rarefied world of Leicester Fields. Unfortunately, a bitter cold wind envelops me, making my earrings, the only ones I possess, sputter against my neck. I shiver in my dress. I did not bring my winter cloak — how could I? It is too plain, the garment of a modest, God-fearing Huguenot woman of Spitalfields, not the West End. Sober manner and somber dress, such is our creed.

Without a word, I thrust the invitation into the gloved hand of the silver-wigged servant. He does not look down at the card.

“Have you no escort, Madame?”

He peers at the writing and frowns. “This was sent to Pierre Billiou.”

“My name is Genevieve Planché and I am his family — his granddaughter,” I reply. My mother died of smallpox when I was eight. My father being dead of typhus three years before that, Pierre has long been my only family.

I say, as casually as I can manage, “Grandfather is ill, but he wished me to convey to Mr. William Hogarth in person his wishes for a merry Christmas.”

The servant purses his lips.

I take a step closer. “I’m sure Mr. Hogarth would be most angry to know that a member of the Billiou family was made to feel unwelcome.”

A smile crinkles the servant’s face. With a mocking flourish, he beckons for me to enter. I straighten my shoulders and follow him, determined to maintain the appearance of being accustomed to such occasions, when the truth is I’ve only attended two artists’ gatherings hosted by my grandfather and they consisted of three or four old friends grumbling about their commissions over goblets of cognac. I’ve never attended a party among London society in my life.