This week I’m thrilled to interview ITW Debut Author Paul H. B. Shin. Paul H.B. Shin’s debut novel follows a career as an award-winning journalist for more than 20 years, most recently for ABC News.
He was previously a reporter and editor for the New York Daily News. He was born in South Korea and lived in London during his childhood. He now lives in Brooklyn, New York.
THE INTERVIEW
You spent twenty years working as a reporter and editor before you published your first novel. How did those experiences impact your fiction writing?
As a reader, I enjoy pure fantasy stories as much as everyone else, but as a writer, I wanted to craft a novel grounded solidly in reality. So, the main way that my work as a journalist influenced my novel Half Life was that I took a very reportorial approach—intermingling real-life events and real-life characters with fictional ones. (I love this, Paul, I’m also a big fan of real-life aspects in fiction)
Also, because Half Life deals with North Korea, a subject that most Western readers aren’t that familiar with, I wanted to give them mileposts that they could recognize—not only to enhance the reality of the story, but also to make it relevant to their lives.
You were born in South Korea, grew up in London, and now live in Brooklyn. Half Life is about North Korea. What made you interested in writing a novel about that? Did your own history inform that decision? In what way?
The genesis of Half Life was a real life event that happened in New York City in 1997—an incident involving the North Korean ambassador to the United Nations that I eventually adapted and worked into the novel. 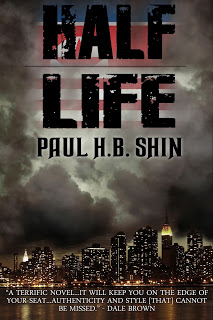 I was looking for a way into telling a story about North Korea in an authentic way. There’s that old adage to write what you know. So, I hit upon the idea that I could write something authentic if I based the story mostly in America, centered around a North Korean main character who was a diplomat based here.
One of the things that I’m proud of about “Half Life” is that I believe it’s a story that no one else could have written because of the way it straddles different cultures. I tried to incorporate my own personal history to inform that. (I think shaping a story using things we are invested in always brings more to our work)
After working so many years in the fast paced world of journalism, how has your writing routine changed? Tell us about your process of writing a novel.
The difference between writing for journalism vs. writing a novel is kind of like a left-brain, right-brain thing, but they do influence one another. For “Half Life,” I knew it would take a long time to write—both because of the research and because I had a full-time day job. So, I knew I would need a road map to keep me on track. That’s one reason I outlined the story quite thoroughly, marking out the major plot points and the emotional arcs that I needed the main characters to go through. Having that outline was invaluable. Many times when I began to lose momentum, I went back to the outline to reconnect with main thread of the story.
In terms of the actual process of writing, I tend to write in the morning before the day gets away from me, because I find that my mind is fatigued by the end of the day, and the last thing I want to do is sit at a keyboard again and struggle to hammer out something creative.(Me too! I’m not a morning person, but once I’m up, I’m definitely more creative before the day wears me out.)
What has been the biggest surprise for you, now that your first novel is on the shelves?
The biggest surprise for me was learning about the marketing and promotional aspects of the publishing industry. Because “Half Life” is my debut novel, I was woefully unaware of what’s involved in promoting the book. That’s been a steep learning curve, but at the same time, I’ve enjoyed delving into that process, and it’s given me a new appreciation for what it takes for an author to have both critical and commercial success.(Right! I think so many of us go through that. I sometimes wish I had a background in marketing.)
Tell us something about you that is not about your writing career—what are your hobbies or interests outside of writing.
I’m an avid practitioner of two related forms of Japanese martial arts called kendo and iaido (pronounced ee-eye-doh). They’re forms of fencing once practiced by the samurai. In fact, I’ve been the U.S. national champion in iaido three times. (Awesome! Congratulations)
I also used to do the occasional triathlon, but I was sidelined by a hip injury that required surgery. So, I’m gradually working my way back to fighting form, so to speak. I recently got back into running, and I realized how much I missed the Zen-ness of it. (Hope you are fully recovered soon.)
What are you working on now?
I’m working on a novel about a samurai who travels to Elizabethan England. So, it’s historical fiction. I guess you could say it’s partly related to my martial arts practice. I’m trying to bring a kind of journalistic rigor to the story as well, because there are a lot of misconceptions about both the Elizabethan period and the feudal era in Japan that are perpetuated in popular culture. So, I’m striving for something that’s historically authentic in addition to being a good story. (That sounds fascinating. When I’m teaching theater I like to remind students that the events in Shakespeare In Love could never really have happened…)
Final Words of Wisdom:
Writing is a craft, so to get better at it, you have to keep practicing it. But I think for new writers, that advice can be rather obvious and not that helpful. When you’re at the beginning of your writing career, you’re often dissatisfied with what you’re creating. But I once heard some advice from Ira Glass, the host and producer of the public radio program “This American Life,” that made me sit up and nod in agreement. He said that the fact that you’re not satisfied with the quality of your own work when you’re starting out is a good thing, because that means you have good taste. So, through practice, you narrow that gap between the quality of your own work and your good taste. Because one could argue that good taste is harder to learn than good writing.
I would also add that it’s important if you want to make a living as a writer not to wait for inspiration to strike you. That’s a luxury that you can’t afford. It’s really important to just plug away at it. Some days the words will flow easily and some days it’s pure torture. But I think I’ve created some of my best work by battling through some of those deep valleys. (Great advice. Thanks for joining us this week!)