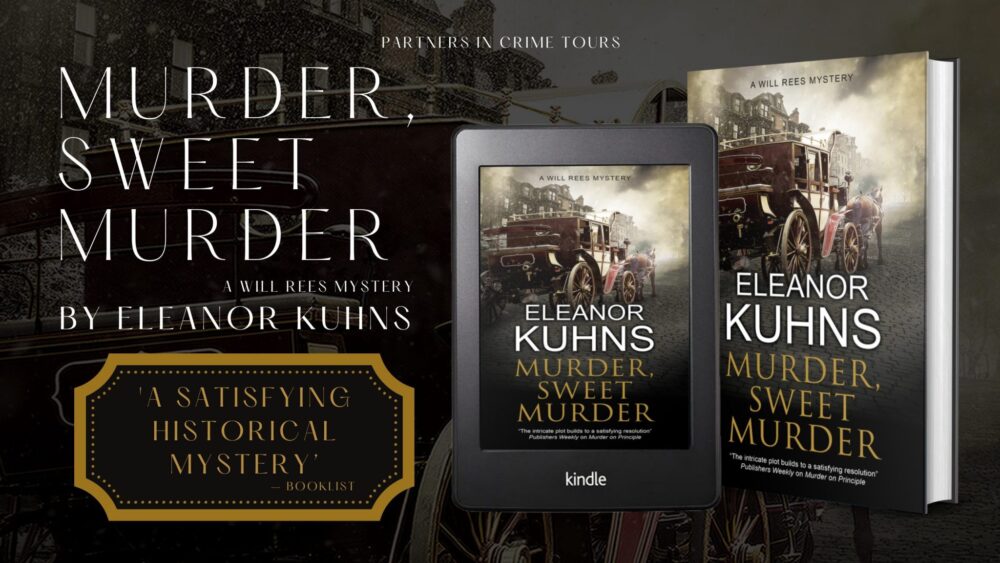 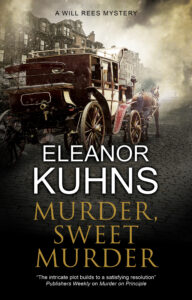 Will Rees accompanies his wife to Boston to help clear her estranged father’s name in this gripping mystery set in the early nineteenth century.

January, 1801. When Lydia’s estranged father is accused of murder, Will Rees escorts her to Boston to uncover the truth. Marcus Farrell is believed to have murdered one of his workers, a boy from Jamaica where he owns a plantation. Marcus swears he’s innocent. However, a scandal has been aroused by his refusal to answer questions and accusations he bribed officials.

As Will and Lydia investigate, Marcus’s brother, Julian, is shot and killed. This time, all fingers point towards James Farrell, Lydia’s brother. Is someone targeting the family? Were the family quarreling over the family businesses and someone lashed out? What’s Marcus hiding and why won’t he accept help?

With the Farrell family falling apart and their reputation in tatters, Will and Lydia must solve the murders soon. But will they succeed before the murderer strikes again?

To purchase Murder, Sweet Murder, click on any of the following links: Amazon | Barnes & Noble | Goodreads

My Thoughts on Murder, Sweet Murder

A quick and delightful read, historical fiction and traditional mystery fans alike will enjoy the puzzle, the characters, and the era.

Historical mysteries can be a double thrill. A delicious murder — or two — and fun details to paint a picture of another time and place. Eleanor Kuhn does an excellent job with both.

Will Rees and his wife Lydia travel to her family home in Boston at the behest of her sister, Cordelia Ferrell. Their father has been accused of murder, an act the entire family appears to agree he’s capable of. That’s not the issue. The larger problem is that Cordelia has become blacklisted by potential suitors due to the scandal. A silly, but charming girl, Cordelia despairs of a decent match unless the black cloud can be chased away from their family name.

Despite years of estrangement from her father, the husband and wife team arrive, prepared to navigate a truce with the elder generation of Ferrells and solve the crime.

From the modes of travel to the conditions of the streets, Kuhn provides details of Boston in 1801. She also incorporates the distinction between a well-to-do merchant-class family, and the world Lydia built with her craftsman husband. The wealth and trappings of the Ferrells’ play second fiddle to the loving dynamic between Will and his wife.

From the slave-built plantations of Jamaica to the dirty Boston wharves, the tangle of misdeeds and suspects fill Murder, Sweet Murder with enough clues and red herrings to keep readers engaged. The characters are well-drawn: The women have spunk, despite the constraints of the times, and the men fight for honor as much as material wealth.

A quick and delightful read, historical fiction and traditional mystery fans alike will enjoy the puzzle, the characters, and the era.

Even though this is the eleventh novel in this long-running series, Murder, Sweet Murder can be read as a standalone.

After regarding Rees for several seconds, Mr Farrell extended his hand. Rees grasped it, painfully conscious of his rough hand, calloused by both farm work and weaving. ‘Please attend me in my office,’ Mr Farrell said. ‘We are expecting a few guests for dinner tonight so we will have little time to talk then.’ Turning, he strode away. Rees started to follow but, realizing that Lydia was not by his side, he turned back. She stood hesitantly by the table, her hands tightly clenched together. Rees glared at Mr Farrell’s back and then, reaching out, he pulled one of her hands through his elbow. Together they followed her father into his office.

As Farrell moved a stack of papers from the center of the desk to one side, Rees looked around.  A large globe on a stand stood to the right of Farrell’s desk and one chair had been drawn up to the front. A seating area, with additional chairs, were arranged by the window that looked out upon the front garden. A table in the center held an intricately carved tray with a crystal decanter and several glasses. Shelves of books lined the wall behind and adjacent to the desk, on Rees’s right.

The room was chilly although the fire was burning. Newly laid, it had been lighted, no doubt by some anonymous servant.

Farrell looked up and his eyes rested on Lydia in surprise. Rees felt his wife shrink back, intimidated. He was not going to stand for that. He pulled a chair from the window grouping and placed it in front of the desk. She hesitated for a few seconds and then, lifting her chin defiantly, she sat down. Once she was seated, Rees lowered himself into the opposite chair. After one final dismissive glance at his daughter, Farrell looked at Rees.

‘That is so,’ Rees said, adding politely, ‘I understand you are a merchant.’

Farrell smiled. ‘I see your wife has told you very little about me or my profession.’ Since responding in the affirmative seemed somehow disloyal to Lydia, Rees said nothing.

Farrell took a box from his desk drawer and opened it to extract a cigar. ‘Would you like a smoke?’

‘Or a glass of rum? Or whiskey if that is your tipple.’ When Rees declined again, Farrell put away the cigars and walked to the fireplace to light a splint. The end of the cigar glowed red and the acrid scent of burning tobacco filled the room. Puffing, Farrell returned to his seat.  ‘I suppose one could say I was a merchant. But I do so much more.  I own a plantation as well as a fleet of ships that sail between Boston, the West Indies and Africa.  In Jamaica they take on sugar and molasses which are returned to Boston. Some of it is transformed into rum in my distillery. I export the liquor overseas, both to England and to Africa where the proceeds are used to purchase slaves.’

‘Most of the slaves are brought to the sugar plantation,’ Farrell continued, seemingly oblivious to his daughter’s distress, ‘but some are sold in the Southern states. And you needn’t look so shocked. Why that upstart Republican with his radical ideas, Mr Jefferson, owns slaves. And he may be the next President. I suppose you voted for him.’

Rees did not respond immediately. Although many of Mr Jefferson’s ideas were appealing, Rees had found in the end that he could not vote for a slave holder. Instead, he had voted for Mr Adams. But that gentleman had not placed; the election was a tie between Thomas Jefferson and Aaron Burr. Sent to the House for resolution, Jefferson had won by one vote.’ No,’ Rees said carefully, keeping his voice level with an effort, ‘I voted for his opponent.’

‘Well, that makes us kin then. Although you will meet a few slaves here in Boston, in this very house.’ He grinned and Rees thought of Morris and Bridget with their tinted skin. ‘But few, very few. Neither the Africans nor the Spanish Indians adapt well to this northern climate and they quickly die.’ This was said with indifference as though he spoke of a broken chair.

Farrell flicked a glance at his daughter and smiled. With a surge of anger, Rees realized that Farrell fully understood the effect his speech would have on her and was enjoying her misery. Rees gathered himself to rise from his chair. Lydia reached out and grasped his sleeve.

‘This is for Cordy,’ she whispered. Rees sat down again, his body stiff.

‘But you did not come to listen to me natter on about my profession,’ Farrell said, watching the byplay with interest. ‘Shall we discuss that ridiculous murder, the one of which I am accused?’

Rees looked into Lydia’s beseeching eyes and after a few seconds he relaxed into his seat. God forgive him, a part of him hoped Marcus Farrell was guilty.

‘Permit me to save you both time and effort,’ he said. ‘I did not kill that boy.’

‘Then why do people think you did?’ Rees asked. Puffing furiously, and clearly unwilling to reply, Farrell took a turn around the room.

‘Did you know him?’ Lydia asked, her voice low and clear. ‘This Roark?’

Farrell stood up so abruptly his chair almost tipped over.  ‘Yes, I knew him.’ He glanced at Rees. ‘We were seen, Roark and I, arguing down at Long Wharf.’

‘Arguing about what?’ Rees asked.

‘It is not important. He was a nobody.’ Farrell glared at Rees, daring him to persist. Rees waited, never removing his gaze from the other man. Sometimes silence made the best hammer. Finally, Farrell said angrily, ‘He wanted a rise in his wages. I said no. He disagreed. That was all there was to it.’

Rees glanced at Lydia and found her staring at him. He knew, and he suspected she did

too, that her father had just lied to them. 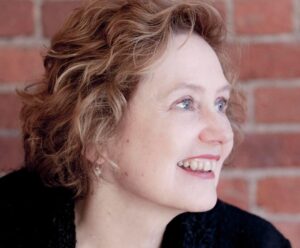 Eleanor Kuhns is the 2011 winner of the Mystery Writers of America/Minotaur first mystery novel. Murder, Sweet Murder is the eleventh mystery following the adventures of Rees and his wife.

She transitioned to full time writing last year after a successful career spent in library service. Eleanor lives in upstate New York with her husband and dog.

Enter the Author/Partners In Crime Giveaway! 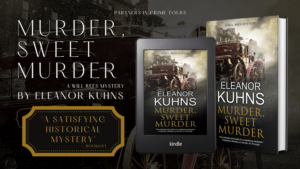 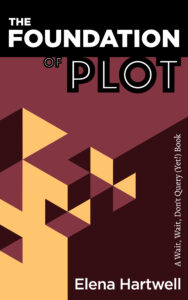