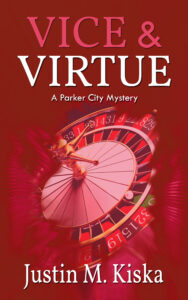 Three years after the Spring Strangler case rocked the historic Western Maryland city nestled at the foot of the beautiful Blue Ridge Mountains, life has returned to normal for Detective Ben Winters and his partner, Tommy Mason. With a new chief now leading the department and the city slowly crawling out of its economic distress, everything seems to be moving in the right direction.

Until one sweltering summer day, a killer begins targeting police officers. Ben and Tommy find themselves once again leading an investigation the likes of which Parker City has never seen. The detectives quickly come to realize that until the shooter is found, everyone wearing a badge is in danger. To complicate matters even further, when a recently unearthed skeleton mysteriously connects to the string of police homicides, Ben and Tommy begin to think their current case may be tied to events twenty years earlier.

But how could a skeleton buried two decades ago hold the key to solving their current case?

To purchase Vice & Virtue, click either of the following links:  Amazon | Goodreads

FROM STAGE TO PAGE

Did I ever think I would be a mystery writer?  No.

I never thought I would write one book, let alone have a series.  At the same time, though, I never thought I’d be a theatre producer either.  For someone who likes to be in control and have a plan, I’m coming to grips with the fact my childhood-self was very wrong about the career path we would take.  But if it wasn’t for the fact my family bought a theatre twenty years ago and I decided to join the business, I would never have ended up writing my first mystery.

That first mystery was an interactive murder mystery that was produced at the theatre, and the characters were all ridiculously over-the-top and the murder was in no way realistic.  The audience loved it, but it wasn’t the kind of mystery you’d find in a book.  It’s where it all began, though.  Because after that first interactive mystery, I wrote another.  And another.  And another.  Fast forward to today and I have more than fifty different interactive mysteries that I have written and have been produced under my belt.

One day I decided I wanted to sit down and write a ‘real,’ full-length mystery.  With a beginning, middle, and end.  With twists and turns and ‘real’ characters, not crazy caricatures.  A serious, good old-fashioned mystery.  I think I did it more to see if I could rather than to actually have it published.

As I started writing Now & Then, the first book in the Parker City Mysteries Series, I realized I was drawing quite a bit on my knowledge as a theatrical director.  I kept writing the scenes so they were as visual as I could make them – almost as if I was writing them to be put in front of a live audience.

Over the last two decades – it’s hard to believe it’s been that long – in addition to my own mysteries, I’ve had the opportunity to direct productions of Agatha Christie’s And Then There Were None, Frederick Knott’s Wait Until Dark, Baskerville: A Sherlock Holmes Mystery, and Clue.  I even have a new staging of Agatha Christie’s Murder on the Orient Express coming up later this year.  When it comes to mysteries and thrillers on stage, I’m your guy.

When I’m directing, I always try to find a way to keep audiences on the edge of their seats and really draw them into the action on stage.  To give them a connection with the story so they feel like they’re a part of it.  I wasn’t consciously doing that at first when I started writing Now & Then, but I quickly came to realize      my goals as a director were the same as my goals as a writer.  Not only did I want the readers to be entertained by the story, I wanted them to feel like they were a part of the story.

To some extent, that’s why I put clues in my stories that can actually help readers solve the case.  I know there are some mystery writers who never really intend for the reader to be able to solve the case on their own, but by giving them a chance to pick out bits of information, it lets the readers feel like they’re working on the case alongside the detectives.  They end up with more of a vested interest in the story.  And when that happens, they’re able to enjoy the book more.

I think where I see the biggest parallel between my stage work and writing is the way I like to end scenes on stage or chapters in a book.  In the theatre, at the end of a really intense scene, a lot of times it will end with something of a cliffhanger, and a blackout to make it even more dramatic.  I love ending a chapter on a cliffhanger.  Whether it’s a major revelation or just a surprise, I write the ending of a chapter as if it ends with a blackout.  It goes back to the whole visualization of the story.

The one thing I do like about writing better than directing is that I have no limitations.  I can create as many characters and locations as I like in a book.  When I direct or produce a stage show, there are budget constraints.  That just means if any of my books ever get made into a television show or movie, I’ll let someone else direct so I don’t have to worry about the budget!

Tall and athletic, Tommy Mason always reminded Ben of Tom Selleck’s Magnum P.I. character from television. Tommy always had that whole ruggedly handsome thing going for him. Mixed with a little bit of a “bad boy” vibe and he drove the women wild.

Next to Ben’s clean-cut, buttoned-down appearance, their pairing caused many to do a doubletake. At first glance, they appeared to be complete opposites. But as one got to know them, they were very much alike. Each brought out the best in the other and at the end of the day, it was all about getting the job done. Sure, each had his own style, but that’s what made them such a formidable team.

Tommy’s apparent willingness to skirt the rules was always offset by Ben’s ability to find ways to use the rules to their benefit. Just as Ben’s refusal to play the internal politics game allowed Tommy to use his charm to keep too many feathers from getting ruffled amongst the powers-that-be. They each knew the other’s strengths and weaknesses and how to adapt them to their own, which is why they’d been so impressive in getting the PCPD’s Detective Squad off the ground.

“What are you doing here?” Ben asked, more than a little surprised to see his partner.

“Shirley from Dispatch called me. She thought I’d be interested,” Tommy explained. “And before you say anything about what I’m wearing, I just want to remind you, it is our day off, so I didn’t think I needed to get dressed up to come to a potential crime scene. Especially when we don’t actually know this is a crime scene yet.”

He was referring to the fact he had on a T-shirt and comfortable pair of jeans, as opposed to the full suit and tie Ben was wearing.

“Besides, now you don’t have to worry about getting your fancy suit muddy. I have no problems getting down there in the dirt,” Tommy smiled, pointing at the fresh mud stains on his knees. With that, he knelt back down to take another look at the exposed skeletal remains under the floorboards.

“So, tell me. What do we have?” Ben asked, crouching next to Tommy so he could get a better look.

“You can see there’s a pretty big cavity here under this part of the floor,” Tommy pointed out. “It’s got to be a good ten by ten area where the ground has been eaten away, even though it’s not too deep, less than a foot in some places. It’s definitely because of water…there’s a lot of mud down there. As the earth under the floor eroded, it uncovered the skeleton. Partway, at least. Of course, no one could see what was happening under here until our friend Mr. Haggarty had the unfortunate experience of stepping on a board that was rotted through and it snapped, sending him falling through the floor. You can see where he landed in the mud.

“And right there,” Tommy pointed, “you see the skull and top portion of the skeleton sticking out of the ground.”

“You came face-to-face with that thing, man?” Tommy looked over at the construction worker who was leaning against the wall. “Not a good way to start the day.”

Turning back to the skeleton, Tommy said, “I’m no expert, but that hole in the skull right there…see it, it looks like it could be a GSW from a pretty heavy caliber gun.”

Standing and stretching their legs, Tommy said, “When Shirley first called me, I thought this was going to have been some kind of prank. Some kids snuck into the site on a dare and left a skeleton for the crew to find.”

“You thought kids somehow buried a skeleton under this building in the hopes someone would fall through the floor and find it?” Ben asked, raising an eyebrow. “Not to mention having to figure out how to bury the thing under the floor?”

“In my defense,” Tommy started, raising a finger and shaking it at his partner, “I didn’t know the skeleton was buried under the warehouse. I just knew they’d found a skeleton at the warehouse.”

The first thing that needed to happen was to get the skeleton out of the ground. That would be up to the crime scene techs. Even though he could easily reach in and pull the skull out to get a better look, Ben didn’t want to disturb anything more than it already had been when Lance Haggarty crashed through the floor. Thankfully, he hadn’t actually landed on the skull itself.

“So much for our day off,” Ben said, looking at his watch, wondering where the crime scene guys were. 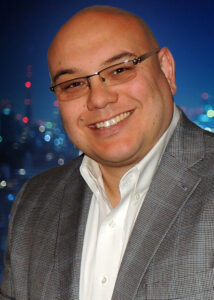 When not sitting in his library devising new and clever ways to kill people (for his mysteries), Justin can usually be found at The Way Off Broadway Dinner Theatre, outside of Washington, DC, where he is one of the owners and producers.

In addition to writing the Parker City Mysteries Series, he is also the mastermind behind Marquee Mysteries, a series of interactive mystery events he has been writing and producing for over fifteen years.

Justin and his wife, Jessica, live along Lake Linganore outside of Frederick, Maryland. 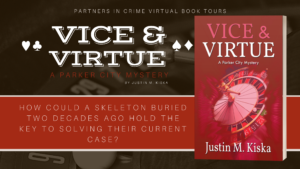 The Ghosts of Thorwald Place: Debut Novel by Helen Power