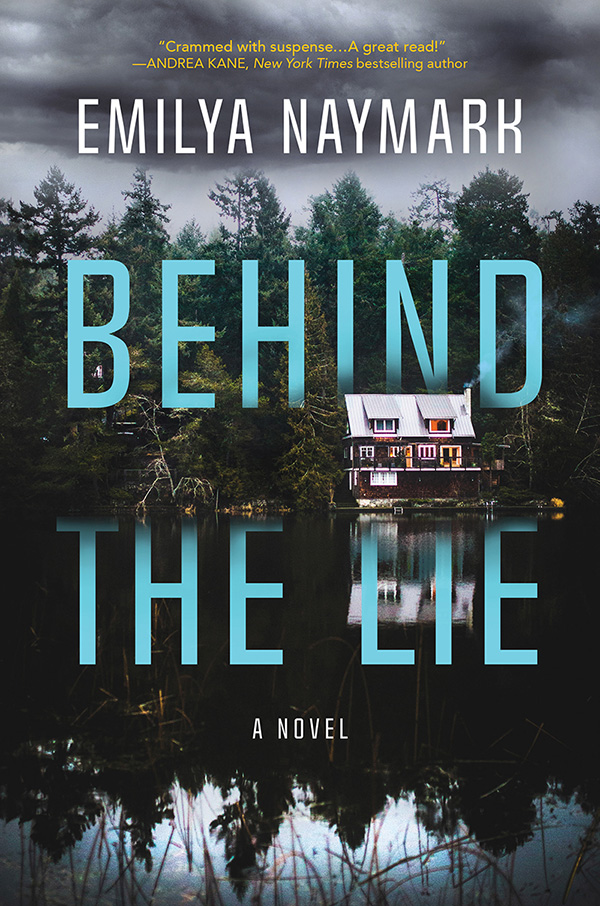 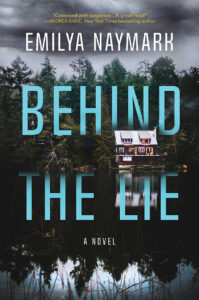 A transplant to the upstate New York hamlet of Sylvan, all Laney wants is a peaceful life for herself and her son. But things rarely remain calm in Laney’s life—and when her neighborhood summer block party explodes in shocking violence and ends with her friend’s disappearance, she’ll need all her skills as a PI to solve a mystery that reaches far beyond her small town.

As people closest to Laney fall under suspicion, the local authorities and even her colleagues question her own complicity. And then there’s fifteen-year-old Alfie, her complicated and enigmatic son, obviously hiding something. Even as Laney struggles to bury evidence of her boy’s involvement, his cagey behavior rings every maternal alarm. Laney’s personal life unravels as she’s drawn into her missing friend’s dark secrets and she realizes she and Alfie are in danger.

With treachery blazing hot as the searing summer sun, Laney fights to save lives, her family’s included.

Praise for  Behind the Lie : “Naymark hits the rhythms of small-town life perfectly and maintains tension by alternating perspectives. Lisa Unger fans will want to take a look.” —Publishers Weekly, starred review

To purchase Behind the Lie click on the following links: Amazon, Barnes&Noble, Indie Bound, Book Depository

A note from Emilya about libraries: I love libraries and libraries have been very good to me. If your local library system doesn’t carry Hide in Place or Behind the Lie, ask them to! I’m thrilled to have my novels in libraries all over the English-speaking world.

My thoughts on Behind the Lie

A taut mystery full of complex characters and unexpected turns and reveals.

Author voice is difficult to define, but readers know it when they see it. Emilya Naymark’s author voice rings loud and clear in her latest release, Behind the Lie. Though her debut novel was strong, her second outing shows an even more confident author, who understands how to build suspense and plot a compelling tale.

Laney Bird has a lot of pressure on her. Her closest — maybe only — friend vanishes after an entanglement with a mysterious couple who recently arrived in quiet Sylvan. Determined to find her friend, who may or may not have committed serious and violent crimes, Laney begins to investigate. But that’s not enough heat, so Naymark turns up the temperature with a parental twist.

Laney’s son Alfie can be too smart for his own good, especially as his radar for trouble and the people who bring it, doesn’t work like a normal teen’s. He trusts first and asks questions later, adding to Laney’s ongoing difficulties. Pulled in multiple directions, Laney has to continually prove herself on her job, sort out how much danger her son is in, and track down her missing friend.

Combining action with emotional upheaval, Naymark gives us a crime novel for our times. Tense enough to take our mind off the challenges of 2022, but human enough for us to feel empathy for Laney and those closest to her. A touch of romance, or at least the potential for it, rounds out this dynamic page-turner.

Readers who love a book they can’t put down will not be disappointed.

Behind the Lie is set in Sylvan, New York. Tell us about that community and how that plays a role in the book:

Sylvan is a fictional town set inside the very real Rockland County in New York’s Hudson Valley. It is in every way like the town where I live, except, of course, for the crazy shenanigans. For all I know, even crazier shenanigans go on in my actual town, but I’m unaware because I have my nose in a book ninety percent of the time. Maybe ninety-five percent.

I grew up in New York City and didn’t know anyone who lived in a house (as opposed to an apartment) until I was eighteen. Living in my version of Sylvan has been excellent for my soul. There are mountains and trails. I’m walking distance from a horse farm. Yet, it’s incredibly metropolitan, only a forty-minute drive from the city, and home to a vibrant arts community. I suspect nearly as many writers live here as in Brooklyn.

All this seeped into the Sylvan neighborhood in my novel—the nature and town life together. It’s so much my neighborhood that I had to assure my neighbors they’re not in the book. And, of course, I based the block party that fires off the novel on fact. After hosting one of those six-hundred-guest parties one summer, I thought—wow, breeding ground for crime. Or a crime story!

We first met Laney in Hide in Place, how has she changed? What would you like readers to know about her?

Laney is an ex-NYPD undercover detective. She resigned before Hide in Place begins, and the novel sees Laney still shellshocked after every single person in her life betrayed her love and trust. Only something even more horrifying than the betrayals can knock her out of the liminal space she’d inflicted on herself.

In Behind the Lie, she continues her journey. She is, tentatively, gingerly, dipping a pinky toe into the waters of friendship and trust. For the first time in her life, she is imagining a future self, an existence on her own terms.

Behind the Lie also revolves around Laney’s fifteen-year-old son, Alfie. What drew you to making Laney a single mom of a teenage boy?

Being a mother of a teenage boy! I’m not single, but something about writing a mother/son relationship hooked me. It might even have been the number one reason I wrote this series. Writers understand writing is only partly cerebral. The other part comes from the angels. Or the soul. Or seeing yourself reflected in your thirteen-year-old kid and wondering how that works, exactly.

Alfie is not my kid, and I gave him many of my own characteristics. But what was so compelling to write was the bond between them and the need they have for each other and simultaneously for independence from each other.

How did your unsettled childhood impact your writing?

Hmm… I have no way of knowing. It’s impossible to point to any one thing and say—this influenced that.

What I can say is my Russian background infuses everything I write because it colors how I am and how I think. In Hide in Place, I wrote about the Russian mob and Brighton Beach culture. In Behind the Lie, I have another set of Russians, and to them I gave both scientific and spiritual qualities because that’s how Russians are. My parents were engineers, but my mother also practiced fortunetelling and they were “knock-wood”, “don’t-break-mirrors”, and “spit-over-your-shoulder-to-ward-off-bad-luck” kind of superstitious.

In one scene toward the beginning of Behind the Lie, a character walks into an almost empty house and sees a tiny saucer of milk on the floor. I don’t explain why because it’s enough that it’s there and my goal was to show something unsettling.

But I know the milk is to appease the house-spirit called domovushka. This spirit is just as likely to misplace your shoes as he is to gift you something. So, it’s always a good idea to be on his nice side. I gave him fictional milk so he could be nice to me in my fictional world.

The novel is not about spirits or ghosts, but it has plenty of characters who walk a blurred line of superstition and instability—my favorite place to write.

Read about Cartomancy, another fascinating piece of Emilya’s family history. Click on the link here.

Now that your second book is coming out, what has been the biggest surprise as a published author?

What HASN’T been a surprise? It’s safe to say every single step in this journey and the continuing journey is a constant surprise. The first time my publisher wrote to tell me NetGalley put Hide in Place on its homepage, I said, “woohoo”! Then, quietly, to my friends, asked “what in the world is NetGalley?”

Like I said, clueless. I didn’t know that traditional books come out on Tuesdays. Or that royalty statements make the Sphinx’s statements seem clear as rain.

The nicest thing I learned was how tight the writing community is. Everyone builds everyone else up, and writers are smart, funny, and generally delightful.

As for “failures”, what I learned is how much of this is luck. Getting a good review, a nod in a competition, a contract, a short story acceptance—depends on who reads you. Sometimes it’s a good fit, and sometimes it isn’t, but if you’ve written the best thing you could, then it’s out of your hands and in Fate’s. Time to spit over your shoulder three times and pour a saucer of milk for domovushka.

I have a passion project I’ve been researching and mapping out. It concerns a crime that happened in my area, something that was big enough to get national attention. I’m deeply interested in the crime’s causes and the public’s reaction. Hopefully, I’ll be able to get it off the ground and into readers’ hands soon.

Write because writing makes you happy. There can’t be any other reason. Money can’t be a reason because only a few make a living at it. We’re told to read widely in our genre, but I think we should read widely, period. Read everything that’s well written. If you enjoy poetry, read that. Science fiction, go for it. Find the writing that makes your soul sing and let it fill you up. Then see what your own soul gives back.

Excellent advice! Such a terrific novel, thank you for hanging out and I hope to have you back soon with your next one.

Iggy is a Jack Russel rescue we got in 2019. Some awful human abused him terribly and then threw him over a fence into a shelter one night, where all eighteen pounds of him ended up surrounded by pit bulls.

He was half of a bonded pair, but the shelter separated them and adopted out his partner before him.

This made little Iggy very, very sad. He was a seriously depressed dog for a long time, and spent a year or so wrapped in blankets, shivering.

It’s taken time, but he’s coming out of his shell. He is cute, polite, and curious. He is not demanding, but it’s impossible to resist his Stare of Longing. And he understands two languages!

Emilya Naymark is the author of the novels Hide in Place and the upcoming Behind the Lie, out February 8, 2022.

Her short stories appear in A Stranger Comes to Town, edited by Michael Koryta, Secrets in the Water, After Midnight: Tales from the Graveyard Shift, River River Journal, Snowbound: Best New England Crime Stories 2017, and 1+30: THE BEST OF MYSTORY.

When not writing, Emilya works as a visual artist and reads massive quantities of psychological thrillers, suspense, and crime fiction. She lives in the Hudson Valley with her family.

The Woman in the Woods: New Suspense From Lisa Hall