There’s nothing more exciting than the launch of a debut novel. And sometimes I think it’s even sweeter when the journey to get to that date wasn’t an easy one. Just as I wrote about in a recent post about authors who persevere (click here to read the post) this week’s author trusted her work and kept at it, rewriting and networking, until she got the “yes.”

Vanessa Westermann is a former Arthur Ellis Awards judge, and has given a talk on the evolution of women’s crime writing, at the Toronto Chapter of Sisters in Crime.

While living in Germany, she attained an M.A. in English Literature and went on to teach creative writing.

An avid reader of crime fiction, Vanessa’s blog features literary reviews and author interviews. She currently lives in Canada and is working on her next novel. 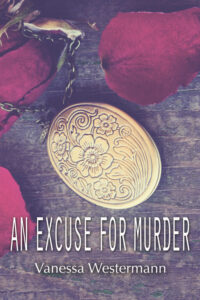 The motive is revenge; it should be easy for Gary to kill.

But when bookstore owner Kate finds the body, her sleuthing takes them down a trail of blackmail, obsession and death.

To buy the book, click any of the following links: Amazon, Barnes & Noble, and Books-a-Million.

An Excuse For Murder is my debut novel, but the third manuscript I’ve written. I was lucky to have gotten encouraging responses from agents and editors for my first two manuscripts, and persevered.

I finished the first draft of An Excuse For Murder (originally written under a different title) in 2012 and, a few weeks later, signed a contract with a literary agent, based in Switzerland. I was living in Germany at the time and we pitched the book to UK publishers. We received many “positive rejections”, but did not manage to sell the book. My agent and I eventually parted ways, as it was difficult to place the title from abroad.

In the meantime, I began writing reviews for the monthly e-newsletter of a mystery-specialty bookstore in Toronto, Canada. Through this, I was able to read widely in the genre and make connections with fellow writers.

I’ve always enjoyed the editing process and knew, if I wanted to pitch the same book again, work needed to be done. A fellow Arthur Ellis Awards judge was kind enough to read through my manuscript and provided me with wonderful constructive criticism.

I spent a year re-writing An Excuse For Murder. I stripped down the prose, taking out excess adjectives and metaphors, and developed Gary’s character. When I moved to Canada, I seized the opportunity to pitch the edited manuscript again, under a new title. And the hard work paid off. I signed a publishing contract with The Wild Rose Press!

I love reading crime fiction and wanted to write what I like to read. I wanted to write a traditional village mystery, with its puzzles and quirky characters, but include the forwards momentum of a thriller.

The characters are linked by danger and uncertain romance.

When I first began developing the plot, I was also writing my masters’ thesis in English Literature, which included a chapter on the role of fairytales in explaining reality to children. I began to reflect on how a part of growing up seems to be that one embraces reason and loses some of that unfailing faith in the existence of magic.

Do stories and the imagination have power over the physical world? This question became a predominant theme in An Excuse For Murder, reflected in the setting.

The Victorian house that Kate lives in is nicknamed “the fairytale house” by locals. How much does the house, and the stories that accompany it, influence the actions of the people living there?

You could say that stories certainly had power over the development of the fictional world within my novel.

I’m currently working on a stand-alone crime novel that features another strong female protagonist as sleuth, a chocolate shop and a dark secret in the past.

But I’m also drafting some ideas for a sequel to Kate and Gary’s story, as I’m sure it won’t be long before Kate stumbles across another mystery…

You had me at chocolate! Congratulations on your debut and best of luck with your next one.