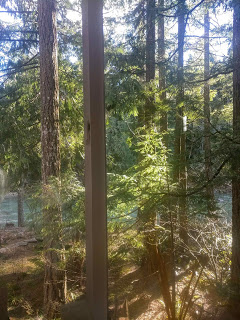 One of the things I love best about my writing room is I look out on trees. The back of my house faces the Middle Fork of the Snoqualmie River, and if I sit up straight, I look down on rushing water.

Across the river is a high bank covered in evergreens. The tops of the trees on the top of the hill go almost to the top of my window. Through the trees in the foreground, which are in my yard, all the way through to the trees on the hill, there are bits and pieces of sky.

Today it’s sunny. That’s not always true in North Bend, Washington, but today it is. It’s warm, almost fifty degrees in January, after weeks below freezing.

I’m almost finished with the first solid draft of the third book in my Eddie Shoes Mystery Series. I took a break to do a final read-through of the ARC of book two, Two Heads Are Deader Than One. (An ARC is an Advanced Reader Copy. Those go out for reviews and blurbs and aren’t available for sale as they sometimes still contain errors and the “praise for” section isn’t finished yet).

It was weird dipping back into book two when my head is all wrapped up in book three and contemplating book four. I’d forgotten a lot of what I’d written, so I had moments of “Oh!  That’s what happens!”

I enjoy my characters. They are funny and quirky and don’t take life too seriously. There’s a lot of me in them, but also a lot of total fabrication. That’s the joy of being a writer, we get to mix up the real and the imagined in whatever ratio we want and no one really knows which part is which.

There’s a condition called catastrophic thinking. A person who struggles with this, obsesses with worst-case scenarios. Part of being a writer is having an overactive imagination. One that never shuts off. If you also tend to play out worst-case scenarios, the world can feel a wee bit dangerous.

I’m somewhere on that spectrum. Not so bad I can’t function in a crisis, (I’m actually the person I’d want around in one of those) but bad enough it has a negative impact on my psyche. I’m basically an upbeat, happy person, but I still get caught up in expecting the worst.

The hard part about being a catastrophic thinker, is that sometimes bad things happen and that justifies our anxieties. Internal and external stressors aggravate the condition, which can turn into a spiral.

The one place I don’t play out worst-case scenarios is with my writing. I don’t get overwhelmed by bad reviews. I don’t get stuck because I think no one will want to read my books. I don’t refuse to send my work out because I don’t think I’m “good enough.” This has gotten me through a lot of years working in the theater and a now as a novelist.

I’m not sure what the difference is, between my writing and everything else in life. Perhaps it’s because I can integrate the reality more than the fiction in my creation of a fictional world. So the books are primarily fiction, but I’m grounded in the reality of my life as a writer.

Or maybe it’s because I get to kill people off and control the situation in my novels. In the real world, I have to behave better.

The things I obsess about are the places I have no control. I worry about my animals. I worry about the future of health care, the environment, equality for all, global warming, and a loss of polar bears. I mean, who would want to live in a world without polar bears?

The tricky part, of course, is worst-case scenarios in all of these areas are possible. We might live in a country where health care is never affordable (and I’m not just talking about health insurance, but actual CARE), the climate might have reached the tipping point and the polar bears will disappear.

So, I ask myself, how much do I want to obsess about those things? 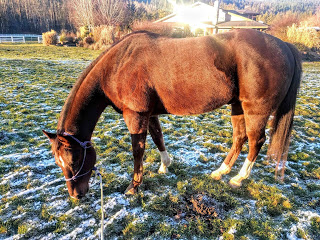 Less, I answer, when the sun is shining and my animals are doing okay. Catastrophic thinking isn’t something I usually talk about. I keep my anxieties to myself. I know, for the most part, my personal fears are irrational. My horse with a common respiratory infection WILL get cleared up with antibiotics and he’s not going to die. Polar will not get out of the yard one day and be eaten by a bear (hey, it’s not that irrational, we once saw two bears fighting over a deer carcass on the street in front of our house). The cats aren’t going to suddenly choke on the various toys they’ve been playing with for months, just because I’ve left the house.

So for now, I’ll stick to killing people on the page and behaving better in the real world. Maybe there’s a reason I don’t write a lot of graphic violence in my novels. The world is an uneasy place and I’d like to keep my fears about our future to a minimum. Enough concern to stay engaged, but not so much I freeze.

We live in a world where we could easily get overwhelmed by how bad things might get. How are you finding ways to keep from getting stuck? I’d love to hear from you.