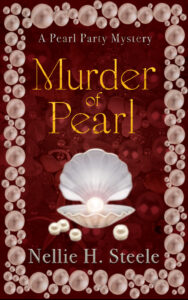 The world’s her oyster…until someone is stabbed with her shucking knife.

With a struggling pearl party business, sisters Kelly and Jodi Silverman are thrilled to land a weekend long jewelry party at a large estate. But the gothic house, complete with its weeping woman fountain, gives Kelly a bad vibe.

A nasty storm strands them at the spooky mansion. And when the birthday gal is found with Kelly’s shucking knife poking from her chest, they’re not only stuck in the creepy house with a murderer roaming the halls but Kelly’s accused of the crime.

Can Kelly and Jodi piece together the limited clues, prove their innocence and stay alive? Or will this pearl party be their last?

To purchase Murder of Pearl, click on the following link: Amazon

What’s the most important thing in a book?  Some people will say plot.  Others will say characters.  Still others will say the writing itself.

But somewhere in there is the setting.  It sometimes gets lost in the shuffle.  Setting isn’t at the top of most people’s lists but it’s often what draws people to a book whether they realize it or not.

A small town with a hidden secret sets the stage for an intriguing mystery.  A stormy island where guests are trapped with a murderer is a classic set up for a gripping tale.

And how fun is a creepy castle with secrets lurking around every corner?  Or maybe a huge gothic mansion with odd rooms and mysteries at every turn.

That’s just the location I envisioned when I started penning Kelly and Jodi’s first pearl party mystery.  There’s nothing spookier (especially for Kelly) than a creepy mansion filled with odd people.  It’s a great setting for a murder.

And I turned to a few places for inspiration.  Specifically, I turned to the imagery used in the 1999 film The Haunting of Hill House.

I remember seeing this movie in the theater with my mom as a teen and it really made an impact.  Not only was the story great, but the imagery used made the house a character in and of itself.  The house became alive and played as large a role as Catherine Zeta Jones or Liam Neeson.

I still vividly recall sitting in the dark movie theater and studying the gothic architecture (while a storm raged outside, making it even creepier!).  From the grand sweeping staircase with its odd statues at the bottom to the elaborate woodwork that would play a role in Nell’s haunting, the design lent so much to the story.

And that is what I aimed to do when I created Willow Lake Estate.  Heavily based on Hugh Crane’s house (there’s even a Hugh Crane reference in the text), I built fantastical images, rooms, and details that would truly set the scene for a really creepy weekend.  And with a storm raging outside, I don’t think anyone can blame Kelly for being less than enthused by the whole thing.

From the roaring lion statues at the foot of the stairs (a bit of a change from the inspiration for the stairway!) to the lion’s head doorknobs, every detail is designed to set the stage.

If you read Murder of Pearl, I hope you’ll find the setting immersive and the mystery intriguing!

Award-winning author Nellie H. Steele writes in as many genres as she reads.

Addicted to books since she could read, Nellie escaped to fictional worlds like the ones created by Carolyn Keene or Victoria Holt long before she decided to put pen to paper and create her own realities.

When she’s not spinning a cozy mystery tale, building a new realm in a contemporary fantasy, or writing another action-adventure car chase, you can find her shuffling through her Noah’s Ark of rescue animals or enjoying a hot cuppa (that’s tea for most Americans.)

Check out all Nellie’s offers at www.anovelideapublishing.com/novels or at her blog, Nellie’s Book Nook, available at www.nelliesbooknook.com!

January 21 – Escape With Dollycas Into A Good Book – SPOTLIGHT

The Foundation of Plot, a Wait, Wait, Don’t Query (Yet!) guidebook. Amazon #1 bestseller

Death Rang the Bell: A New Mystery by Carol Pouliot