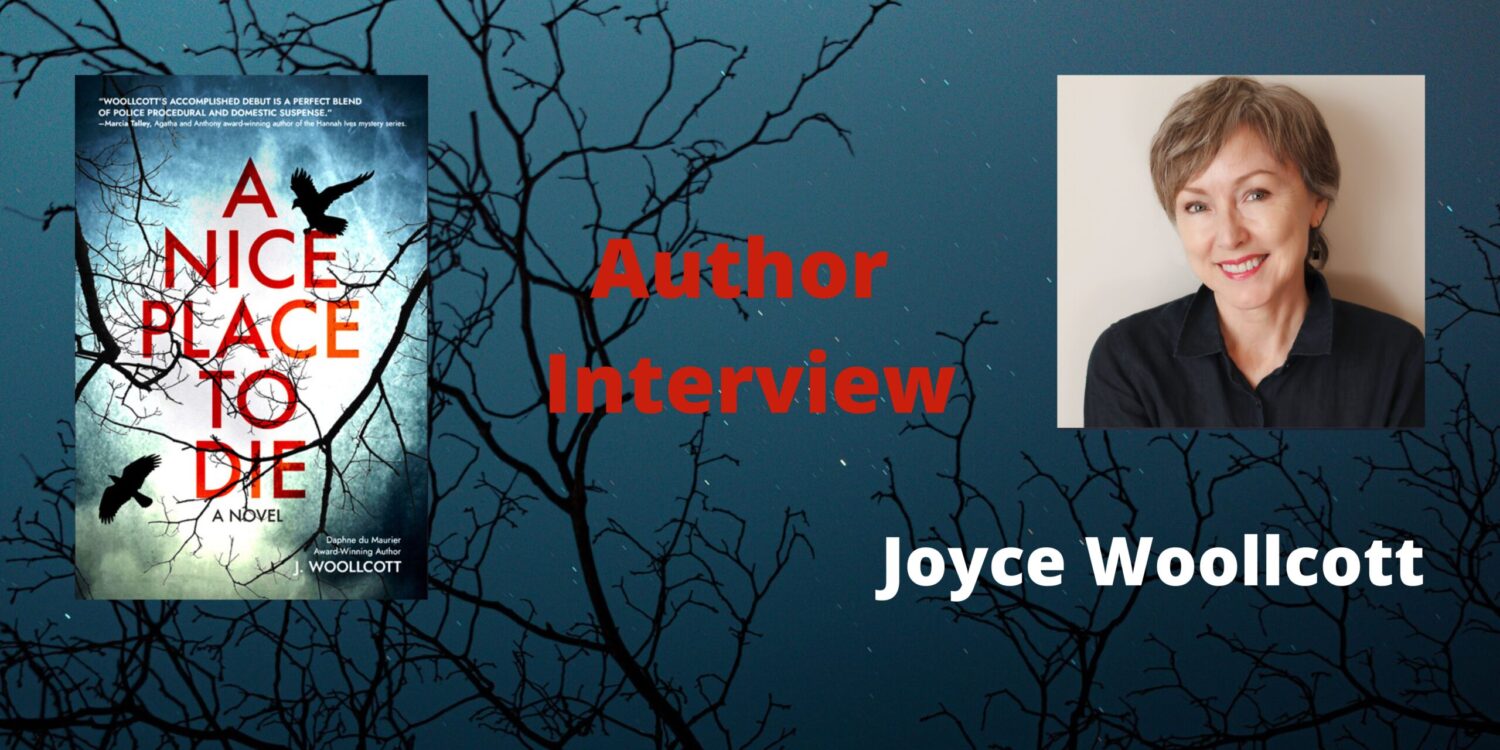 A Nice Place to Die, by debut author Joyce Woollcott

A Nice Place to Die 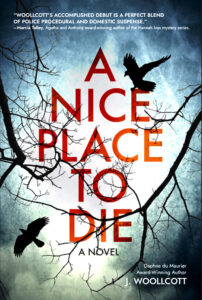 The body of a young woman is found by a river outside Belfast and Detective Sergeant Ryan McBride makes a heart-wrenching discovery at the scene, a discovery he chooses to hide even though it could cost him the investigation — and his career.

The victim was a loner but well-liked. Why would someone want to harm her? And is her murder connected to a rapist who’s stalking the local pubs? As Ryan untangles a web of deception and lies, his suspects die one by one, leading him to a dangerous family secret and a murderer who will stop at nothing to keep it.

And still, he harbors his secret…

To purchase A Nice Place to Die, click on the following link: Amazon

A Nice Place to Die — Author Interview with Joyce Woollcott

A Nice Place to Die takes place in Belfast. What is that community like and how does the place interact with the mystery?

I’ve tried to make Belfast and the surrounding countryside a character in the book. I like to think of setting as a big part of the enjoyment of reading, getting immersed in the story, the five senses almost. And Ulster folk are a funny mix of stoicism and humour. The city of Belfast is actually quite lovely and I do try to bring that forward in the book.

‘Belfast, usually a bundled-up, dowdy old lady, sprang to life in the good weather. The town buzzed with a joy that came with summer and warmth. Girls passed in bright frocks, chatting and swinging handbags, wearing sunglasses. Men, freed from heavy coats and sweaters, wore light shirts and khakis. Even the birds seemed happy, fluttering around like mad things. The city normally had a solid look to it. Older buildings, most of them built of Portland limestone or sandstone, gave it an austere, Presbyterian feeling – but not today. Today the sun shone through laneways and between shadowed side streets, creating shards of light and dark as they walked by. Kevin led the way, chatting easily, asking all about her, what she liked.

During that short walk to the restaurant, that brief slice of time, with its smells and sounds and brightness, she realised how lovely it was, having someone show an interest in her. And strange how the city felt different depending on her moods. Today it fairly sang.’

In the countryside, DS Ryan McBride’s personal interaction with the land speaks to who he is as a character.

‘Clouds broke to sporadic sunlight and a fresh breeze skittered through the leaves at his feet. He could feel rain in the air and he could smell it too. He saw large cumulonimbus thunderheads forming. Agitated, the crows that met him most mornings cawed and flew from treetop to treetop. He fancied they followed him as he walked along the road and cut into the fields behind his farm. He’d been heading back home when the sun briefly burst through the cloud cover again and illuminated the countryside. For a few moments Ryan saw splashes of bright green and ochre, a vivid combination of light and intensity of colour produced by the moisture-drenched air. His own forty shades of green. God, he loved this country.’

A Nice Place to Die is described as a combination of police procedural and domestic suspense. How did the book come about?

The first book I ever wrote was a mystery/thriller. Abducted was about a kidnapped Mexican boy who was the illegitimate son of a rich New York gangster. I enjoyed writing it, and I have been to both Mexico and New York, but the characterizations were more difficult, and the settings took a lot of research. It came to me afterwards that I needed to get back to my roots. I longed to write about my home town. Such a rich, fertile place for setting and character.

I also felt that I needed to connect more with my protagonist and the other characters, and for me, living in Belfast for many years I have some small understanding of how my countrymen and women think. I was lucky also to have a friend who had been in the police, that was a definite plus. I won’t deny either, that several TV police series, especially The Fall, persuaded me that Belfast was a ripe location to explore.

Also Adrian McKinty’s locations. I heard him speak in the summer and he talked about how books set in Belfast were a hard sell a few years ago, but now it was full steam ahead. As for the domestic suspense, I didn’t intentionally add that in, but I needed to bring my hero, DS McBride, some conflict, some angst, so I added romantic entanglements, family conflicts, all that good stuff.

Besides, what good is a rugged, brooding Irishman if he doesn’t have a messy love life?

Conflicted. A tough guy who is bad at relationships, afraid of commitment. His partner, DS Billy Lamont, is younger than him and happily married with three kids. Ryan is in turn glad he’s not in Billy’s position and jealous of his friend’s family life.

Happy in his job, he loves the police, has done well in his career because he enjoys the chase, the careful unravelling of a mystery—catching the bad guy. But he knows something is missing. He loves his sister Erin, she’s a bit of a hot mess, always getting into bad relationships, another reason why he tries to steer clear of them.

He has an on-again, off-again girlfriend and in some ways that suits him. Bridget is almost as relationship-phobic as he is. He loves his mum but has real problems with his father, a successful barrister who expected him to join the family law firm after Ryan graduated from Queen’s University Belfast School of Law. Did not expect his only son to apply to the police instead. Although tensions between them have been easing lately, mostly due to his mum and sister’s urging.

The second book in the series, Blood Relations, launches August 2023. Were there big differences between writing book one and two?

Yes and no. I’m comfortable with my protagonist and his team. They are my core group. In book two I needed to wrap them around a new murder. This gave me the chance to develop a whole new cast of characters and build on the existing ones. Strangely, these characters are almost alive to me, and how they react to new situations and people can be as surprising to the me as it is to the reader.

It’s also fun to revisit and expand some of my favourites from A Nice Place to Die. Plus I have a little more confidence. Every time I manage to finish a book I think, wow, how did that happen? Blood Relations introduces a whole new set of antagonists including a new boss who has an old score to settle and a bad guy who takes an instant and deadly dislike to Ryan.

It also allows me to set up a few new people who may feature in book three. Two of them in particular I hope to bring back. Like Sheila Howells and Gracie Bell.

Chief Superintendent Sheila Howells extended her arm and motioned them to a sofa in the corner. A big, buxom woman in her fifties with badly dyed blond hair and a smoker’s cough, she had large, disorganised features in a round face and had applied her lipstick with a shaky hand. He liked her the better for it – liked that she had made an effort for them – he assumed she had anyway. Ironic that Whelan had to tone the sex appeal down, while Howells – well, no worries on that count.

“That Gracie, she must be something. Eh? Had them trembling in their boots at the mention of her name, us hurting her. What you reckon then? She must be a little hottie.”

Rupert pulled out Harry’s wallet. “I think I saw a picture in here.” He flipped it open and Sweet shone the torch over. They found a photo of Harry with a short, plump, smiling blond. She had a sparkly mini dress on and her hair fizzed out around her bright orange face. She wore far too much makeup, had her eyes outlined rather alarmingly in black, and her lipstick pulsed bright neon pink to match her frock.

“Whoa …” Sweet actually jolted back from the photo. “Right then, say no more.”

Rupert grinned and replaced it in the wallet. Not that Sweet was an oil painting himself. Easy to be a critic.

What can we find you doing when you aren’t writing or reading?

Honestly that seems to be all I do! I love to read. Luckily for my husband I also like to cook, I enjoy mysteries on TV. I paint too but that has taken second place to writing I’m afraid.

I have two works in progress. One is a World War Two mystery/romance about a young translator who travels to Arisaig in Scotland to help British spies of the SOE with their language skills. That I’m calling, THE LINGUIST.

And I’m excited about another mystery I’ve started to write. It’s also set in Northern Ireland on an island off the Antrim coast and features an Inspector who retires from the police when his wife is shot. Six months later he meets another woman, a renter who has taken a house near his. They begin a relationship. Then she disappears. This one is MURDER ON KILLENNIS.

I’ll repeat what I think anyone who has been through this will say. Take classes on craft. Read books on craft. Read books in your genre and sometimes beyond. Join reading groups preferably in your chosen genre. Join a critique group and enter unpublished contests. Listen and use their feedback.

When you have rewritten—and feel happy with your manuscript, bearing in mind criticism from other writers, seek out a developmental editor if you can afford one.

Listen to the editor, don’t be offended. Make changes. Try to get it line-edited too. Send out for queries. Make sure you send only to agents and publishers who are interested in your genre. Address the queries personally. Pay attention to any feedback and resubmit. And very good luck to you.

We inherited her from a very elderly gentleman who got her as a pup when he was eighty-nine.

He passed away when he was ninety-one and asked his son to contact us and see if we would take her.

My husband had been walking her for him when he had been poorly.

He had named her ‘Precious’ and she is, but is now named Molly. Hubby couldn’t see himself calling her that in public.

Joyce Woollcott — Author of A Nice Place to Die 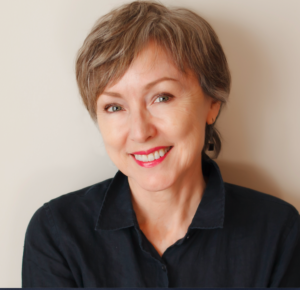 Woollcott is a Canadian writer born in Northern Ireland. She is a graduate of the Humber School for Writers in Toronto. A Nice Place to Die won the RWA Unpublished Mystery/Suspense Daphne du Maurier Award in 2019 in New York, and was short-listed in the Crime Writers of Canada Awards of Excellence in 2021.

A Nice Place To Die is published by Level Best Books.

She is a member of Crime Writers of Canada, Sisters in Crime, International Thriller Writers,  and the Suncoast Writer’s Guild.

Header image by FotoXCapture on Pixabay