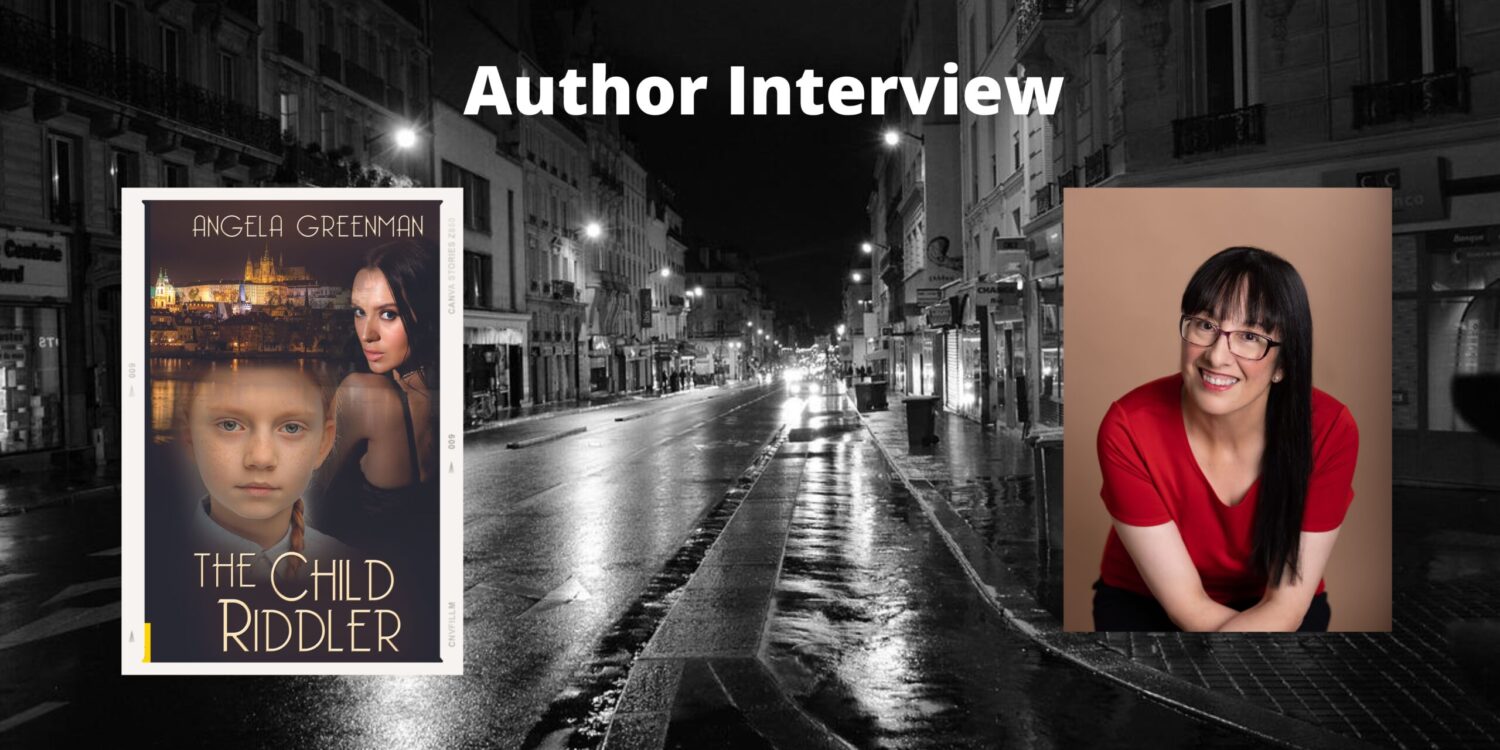 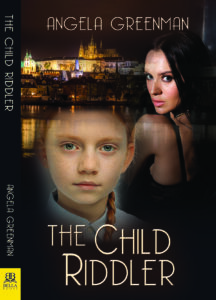 Despite the angry scars she carries from her childhood training, Zoe Lorel has reached a good place in her life. She has her dream job as an elite operative in an international spy agency and she’s found her one true love. Her world is mostly perfect–until she is sent to abduct a nine-year-old girl.

The girl is the only one who knows the riddle that holds the code to unleash the most lethal weapon on earth–the first ever “invisibility” nanoweapon, a cloaking spider bot. But Zoe’s agency isn’t the only one after the child. And when enemies reveal the invisibility weapon’s existence to underground arms dealers, every government and terrorist organization in the world want to find that little girl.

Zoe races to save not only the child she has grown to care about, but also herself. The agency prescribed pills–the ones that transform her into the icy killer she must become to survive–are beginning to threaten her engagement to the one person who brings her happiness. Can she protect the young girl and still protect the one thing she cares more about than anything else?

To purchase The Child Riddler, click on any of the following links: Amazon, Barnes & Noble, Target & IndieBound

Interview with Angela Greenman, Author of The Child Riddler

The Child Riddler features an elite operative of an international spy agency. What kind of research did you do to create Zoe Lorel?

Fortunately, my professional career supplied me with a wealth of information. I had a top-secret clearance and have worked within several governmental organizations. First the city in Chicago, then federal at the US Nuclear Regulatory Commission (NRC), and following that internationally with the International Atomic Energy Agency (IAEA).

While in public affairs at the NRC, I attended nuclear engineering courses and participated in technical meetings, and it was there I acquired an understanding and interest in the future of technology. As an expert and trainer for the IAEA, I collaborated with high-level individuals from many different countries and gained an understanding of the intricacies of diplomacy and the subtleties in relationships. I especially grew to appreciate that it is the diversity of people and cultures that makes life fascinating.

I strive to absorb my experiences and to engage fully with the people that cross my path. I tend to do things one-thousand percent and while sometimes that’s not always the best approach, for me it’s been a great way to learn. Part is drive and part a questioning attitude. I ask a lot of questions. I like to learn why people make the choices they do, why they have the attitude they do, why something happened.

I feel that having a questioning and inquisitive mind means that you know there are other paths than just the one you are on at that moment. My desire to know other options saved me personally from the negative repercussions of a horrific childhood (homelessness, violence) and it helped me break through the glass ceiling professionally. You don’t have to believe what you are seeing is the only view, or that staying in the place where you are now is your only choice. Most likely there are other lenses to select from that might reveal different scenes or routes.

The questioning way of thinking I believe is also an espionage mindset. Operatives/spies are aware that what they are presented with is not the only way it could be, and that they should always be looking for the hidden doors. They understand that people will act differently in other environments.

It was all these factors that helped me craft Zoe Lorel’s technothriller universe.

What intrigues you about nanotechnology?

That something so powerful can be in something so small. That it can be so small it’s virtually invisible—and what is invisible is terrifying.

Tell us about your path to publication with The Child Riddler?

It took me about a decade to get published. Since I was traveling for my international work and also had to do a great deal of preparatory research for the international projects, I didn’t have the opportunity to write on a consistent basis. I frequently went months without writing. So, my work schedule stretched out my writing process by years. Plus, I didn’t have a mindset as to a specific story I wanted to tell. I knew I wanted to write a story about a badass female James Bond, but that was as far as it went. Therefore, it took two completed novels before The Child Riddler story came together.

Those two novels were how I learned and practiced the craft of writing. I made a point to hire editors from the start. I respect editors immensely. Editors are my writing teachers. Fortunately, I was smart enough to know that while I could write press releases, speeches and papers, writing fiction and structuring novels are a whole different ball game.

I queried one of the novels and while I received rejections, I did get some good personal feedback from agents which helped me keep going. I also attended writer conferences and pitched the novel in person to agents and again, amongst the rejections, there was good feedback. I always believed in Zoe Lorel’s story and never gave up. As I mentioned, I overcame a terrible childhood so I knew that successfully achieving a goal takes hard work. My strong belief is anything can be done; no obstacle is immoveable.

Your day job is pretty amazing, how has your role as an internationally recognized communication professional impacted you as a fiction writer?

The pandemic ended my international career since there was no travel. While travel is starting to resume, I think since I’m published now, it’s the right time to turn the page to the next chapter of being a full-time writer.

But to answer your question, my career had a major impact. I traveled to twenty-one countries and experienced first-hand the effect of global political changes and turmoil.

Hungary and other Central and Eastern European countries were undergoing the dramatic change from communism to democracy during part of my tenure with the IAEA. This monumental political shift resulted in a significant need for training in communicating with the media and public, which I was fortunate to be able to assist with through IAEA expert missions and workshops. It was a marvelous opportunity for me as I learned to appreciate the richness of other cultures and had the opportunity to meet and work with many remarkable people.

One of the greatest satisfactions as an author, I think, is sharing. I get to share my life’s exciting adventures with readers. Zoe, as a globe-trotting operative travels to some of the fascinating countries I’ve visited in my career.

But it was more than just traveling to other countries. From the start of my career some thirty years ago in Chicago at the Commission on Human Relations, I worked closely with diverse people, often on a large scale—public meetings, special events, press conferences. And IAEA missions to countries—such as Pakistan, Bulgaria, Russia, Germany, South Africa, Ukraine, France, China, Japan—provided me insights into country histories and cultural complexities.

I learned from my career that the earth is populated by multi-dimensional people who come from a variety of cultures and live under diverse political systems.

As I see it, while fiction may be a story created from someone’s imagination, it probably has happened or will—because we live the stories every day. Our lives are comedies and dramas. Our actions are often mysterious. Our days can be suspenseful.

What can we find you doing when you aren’t writing thrillers?

Reading, boating, refereeing my two Burmese cats’ competition for lap time, and dancing to work out power mixes while on the treadmill.

A sequel to The Child Riddler. I don’t want to tell you more as it’s still early enough in the process for me to change plot elements.

Take in moments with all your senses, so you can enhance your writing with full sensory descriptions. When you step outside, breathe in the humid air. As you walk up to the restaurant look down and gaze at the pink petals of the wildflower plantings. Raise your hand and touch the cool brick wall as you enter. Inside, sit quietly for a second and listen to the varying cadences of the voices surrounding you. When you sip your French onion soup, fully taste the soft sweetness of the caramelized onions by letting them sit your tongue for a few seconds. Lose yourself in your craft. It’s wonderful.

I have two Burmese cats: Princess and Lea (and yes, I realized later the naming was a subconscious tie to one of my favorite movies Star Wars!).

The fur children are affectionate, playful and follow me around.

They are “puppy kitties.” 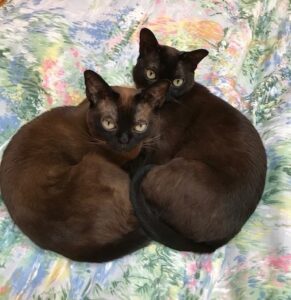 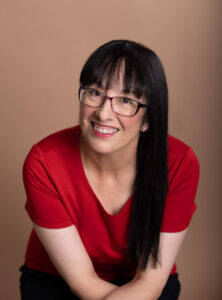 She has been an expert and lecturer with the International Atomic Energy Agency for over a decade, a spokesperson for the US Nuclear Regulatory Commission, and a press officer for the Chicago Commission on Human Relations, the City’s civil rights department.

She has traveled the world (21 countries and counting), sailed the turquoise Caribbean waters, explored Canada’s beautiful wilderness and lakes, and now her imagination is devising plots for future novels that will feature more of the exciting places she has been.