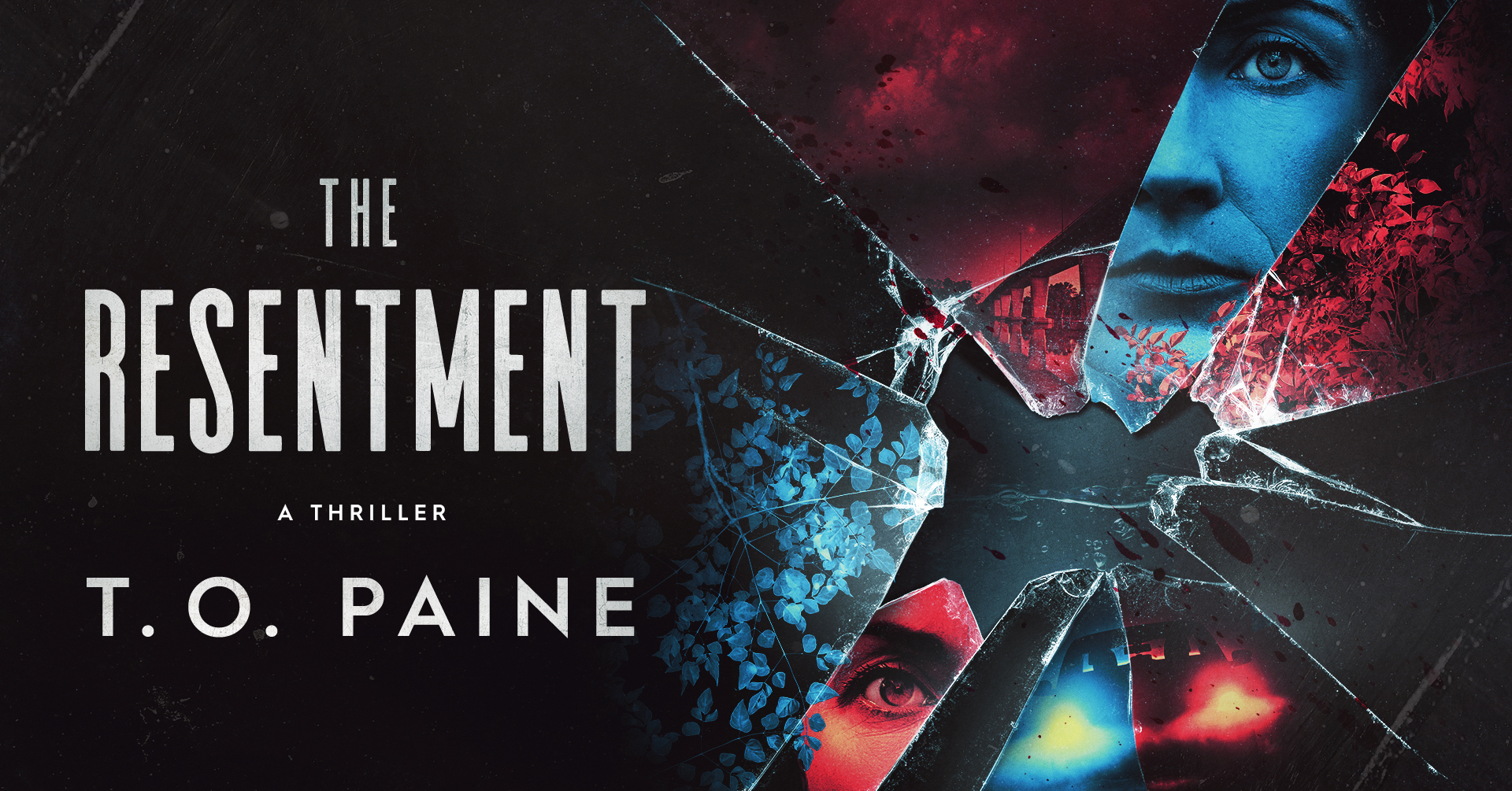 The Resentment, the latest thriller by T.O. Paine 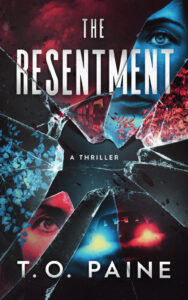 They killed her husband. Now, they’re coming for her son.

Lauren Kaine has everything she ever wanted — a fabulous home, a shiny Lexus, a bright sixteen-year-old son, and a loving husband with a lucrative internet career. Tonight, she walks hand-in-hand with William beneath the lustrous Seattle sky, celebrating twenty-two years of marriage.

But they’re not alone.

A mysterious black Audi comes out of nowhere and chases William onto a bridge. He shouts, “They’re here for the card,” and falls to his death. Enraged, Lauren attacks the car, but the tinted windows hide the driver’s face, and it speeds away.

Still mourning, she sets out to find her husband’s killer when a stranger calls and demands the card. William never mentioned a card, and she doesn’t know where it is. The stranger follows her. He torments her. He threatens to kidnap her son and throw him into the same river that killed William.

And it’s not just the stranger.

Black cars lurk around every corner. William’s co-workers refuse to talk to her. Her brother-in-law resurfaces after years of silence, and he knows something, but she’s running out of time. She searches for the card, and the past pulls her back to the first time someone kidnapped her son. Back to her resentment. Back to the truth.

“This dark thriller is intense, fast-paced, and sure to keep readers on the edge of their seats.” – The Book Review Directory

To purchase The Resentment, click on any of the following links: Amazon, Barnes & Noble & NOOK

The Resentment centers on secrets. What intrigued you about secrets to prompt a novel of suspense?

Secrets. Everyone has them. Driving away from a head-on collision before the police arrive.

Keeping a decades old love affair from your family. Witnessing a drunken college student fall to their death during a fraternity rager in 1998.

Nothing is more suspenseful than the slow reveal of a deep dark secret that has resurfaced to complicate current events.

In The Resentment, I wanted to not only show how past secrets can affect the future but examine how they must come out or ultimately destroy their host. The longer a person keeps a secret, the more guilt will consume their life. Keeping secrets leads to lies which leads to more secrets. As the secrets weigh on a person, their mental anguish increases, and they eventually must come clean or go insane. “Coming clean” often not only means revealing secrets but also seeking forgiveness for them.

There’s suspense in not knowing whether someone will have the humility to admit their wrongs or continue down a path of self-will run riot. You’re only as sick as your secrets . . .

Tell us about Lauren Kaine:

Lauren suffers from Intermittent Explosive Disorder (IED.) Fueled by harboring her own deep, dark secret, her disorder causes her to lose control at the worst possible times.

She often sees red and physically acts out in public places. Until the death of her husband, she led a blessed suburban life, raising their son and keeping to herself in their upper-class home. Mostly keeping her disorder to herself. But, when her husband is wrongfully killed, she must venture into the world and uncover his secrets, the secrets of her brother-in-law, and most importantly, her own secret.

Your first novel, The Teaching is based in part on your true-life experiences with a cult. Tell us a little bit about how that impacted your debut thriller:

I lived in a cult from around 2006 to 2010. While my debut thriller includes the practices, setting, and beliefs of that cult, the characters and suspenseful plot are fictitious. No one went missing from the cult. This cult also didn’t fit the mold of the more commonly known “doomsday” cults such as Heaven’s Gate and Jonestown. Though this gave my debut novel a fresh perspective on cults, many readers expected a thriller with a destructive cult as the villain.

Roughly half the novel contains descriptions of actual experiences, such as watching a trance medium channel a four-hundred-year-old spirit, but a funny thing happened after publication. Several readers commented on those descriptions, saying they were outlandish and unbelievable, yet they were true. Apparently, thriller readers have no issues believing in kidnapping, murder, and general mayhem, but believing people would follow the teachings of someone long dead is a stretch.

The Excursion, your third novel, comes out in October. What do you know now, with three novels under your belt, that you wished you’d known with the first?

I thought I had completed the first novel on four separate occasions. On each occasion, I edited, copy-edited, formatted, and further polished the novel only to rip it apart with major changes.

Writing is rewriting. And then, it is more rewriting. With the third novel, I’ve saved myself a significant amount of time by saving the polishing until the end.

How do you balance character exploration with the action required to sustain a thriller?

We love to love the characters.

We love to love the good in heroes and the evil in villains. And we love to get to know the characters by living alongside them, experiencing what they experience. Thrillers should have nearly constant action, and that action should constantly reveal the inner and outer motivations of the characters.

For me, character exploration blends with the action as opposed to there being a back-and-forth balance. A character’s approach to conquering each challenge forces them to assess their beliefs and take action simultaneously. The outcomes drive the plot and tell us something about the character. Actually, it tells us everything.

“An American Psycho joins Fight Club” is the basis for my fourth thriller, and it is in the very early stages. For those familiar with American Psycho  and Fight Club, I hope to create an enthralling thriller based on how the excesses of the eighties gave way to the credit-centric society of the nineties. No one likes being in debt, and some would do anything to return to the world of the Lifestyles of the Rich and Famous, reckless and conscious free.

Love to write. If you give your time, persistence, and humility to your writing, it will love you back, and everything else will fall into place.

I added up the years I’ve spent living with dogs, divided that number by my age, and it came to over 90% of my life. Time well spent. Finster, the Boston Terrier shown here with his dreamy eyes, joined our family on Christmas, 2010. He is a runt, weighing about half that of a normal Boston, but his heart his huge. His never-ending puppy mentality keeps him fit for his duties as an entertainer and a cuddler. He loves attacking bubble-wrap and runs in terror from his own flatulence. He will forever be a part our family.

T.O. Paine — Author of The Resentment 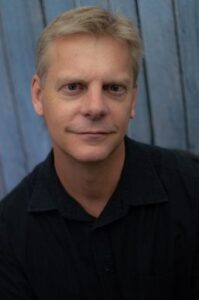 T.O. Paine is a suspense novelist whose authentic characters triumph over extreme situations in challenging, true-to-life settings. He enjoys delving into the emotional consequences of his character’s choices and taking his readers along for the ride. Though his novels are contemporary, things always get out of control. Cults are real, anger is a disorder, and everyone loses when a friendly competition becomes an obsession.

T.O. holds a master’s degree in information systems, and when he is not writing, you can find him running or cycling through the mountains of Colorado, USA. He has run over thirty marathons, ridden over twenty 100-mile cycling events, and completed an IRONMAN.

T.O. resides with his wife, two children, and a Boston terrier who stares at himself in the mirror, questioning his existence.