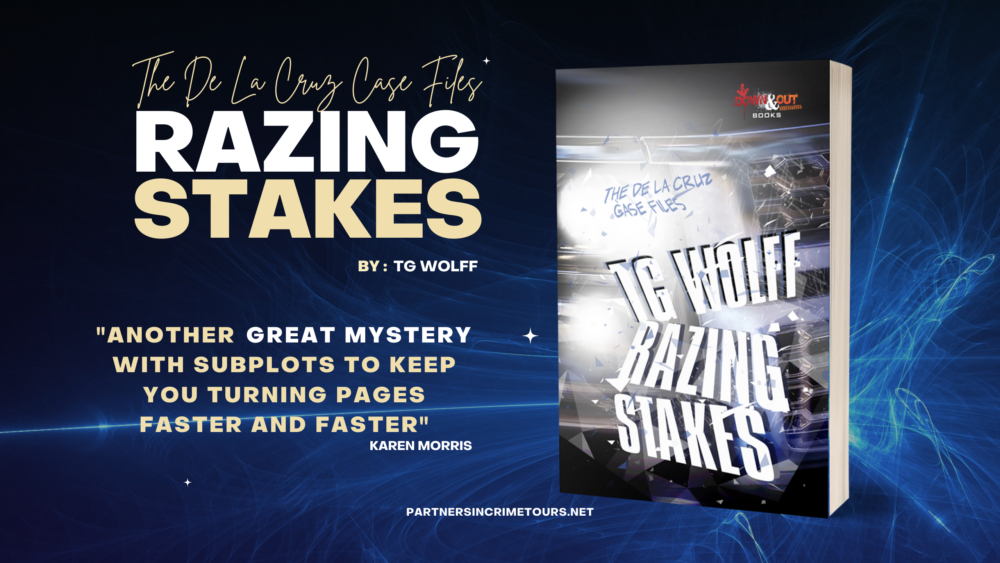 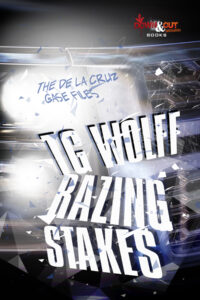 The first day of summer is the last day of a young accountant’s life. Colin McHenry is out for his regular run when an SUV crosses into his path, crushing him. Within hours of the hit-skip, Cleveland Homicide Detective Jesus De La Cruz finds the vehicle in the owner’s garage, who’s on vacation three time zones away. The setup is obvious, but not the hand behind it. The suspects read like a list out of a textbook: the jilted fiancée, the jealous coworker, the overlooked subordinate, the dirty client.

His plate already full, Cruz is assigned to a “special project,” a case needing to be solved quickly and quietly. Cleveland Water technicians are the targets of focused attacks. The crimes range from intimidation to assault. The locations swing between the east, west, and south sides of the city. This is definitely madness, but there is a method behind it.

The two cases are different and yet the same. Motives, opportunities, and alibis don’t point in a single direction. In these mysteries, Cruz has to think laterally, yanking down the curtain to expose the master minding the strings.

To purchase Razing Stakes, click on any of the following links: Amazon | Barnes & Noble | Down & Out Books

I began writing somewhere back around 2007 solely to entertain myself. I was working as a Civil Engineer (my day job), living in Cleveland, Ohio. One of my clients was in Northern Kentucky, some 5 hours away. Making the drive to and from, several times a month gave me time to think…which turned into time to plot.

Come around to 2013 and I have finished a story called “Lost in Tennessee.” It was a mystery with romantic elements. Through a series of happy events, the romance publisher Entangled Publishing signed me up for a three-book series. Through the editing process, the mystery with romantic elements became a romance with a mystery inside. Published under the name Anita DeVito, the Lost In series gave readers a full length mystery and a full length romance.

I love Romantic Suspense stories. It is my #2 favorite genre behind Whodunnits. I had a lot of fun writing the series and learning from the editors the art and science of a romance. When creating a leading pair, I would start with one character and think who, in real life, would a person like this love? And who would love a person like this? In addition to thinking through the details of the mystery, I had to think through the details of moving a relationship very quickly from the cute meet through happily-ever-after.

While I still write romantic expense for my entertainment, I publish mysteries for your enjoyment. The Whodunnit is front and center with Detective Jesus De La Cruz and the De La Cruz casefiles, but I haven’t forgotten that lessons learned with romances. This is where the left side of my brain and the right side get in sync to work together.

Relationships are not just romantic. There are friends, siblings, employer, etc. In these stories, I work to grow Cruz’s relationships with everyone in his world organically. He gets in arguments with his AA sponsor Dr. Oscar Bollier and his best friend Matt Yablonski. His mother runs him to ground and he is still working to make up lost time with his sister’s family.

When you compare my stories to others in the mystery genre, this is the difference. I give you a mystery to be solved, but Jesus De La Cruz is not a cold cop who day and night lives his job. He isn’t a punch throwing, rule breaking, boss hating cop. He is smart and clever. He loves his family and was surprised when a beautiful woman asks him out. He screws up and works his ass off to fix it. He forgives when he is on the receiving end of the mistake. Cruz is as real as I can make him, reflecting how all of us who work a day job manage to keep all of the balls in the air.

Ten minutes dead. The sun shined brightly, no clouds on this first day of summer, the last day of John Doe’s life. Cleveland police Detective Jesus De La Cruz squatted next to the broken body. The warmth beneath his hand testified to the newness of death.

Two EMTs had worked to sustain the man’s life. One was at the ambulance now, tending to the tools of his trade. The other stood over the body, shaking his head at the victim. “He was dead before we arrived, Detective. He just didn’t know it.” The EMT peeled off his gloves, finality in a simple act. “Damn it if we didn’t fight for him. In the end, he was just too crushed.”

Cruz rose looking east and west, north and south. The crime scene was on the side of a road halfway between East 9th Street and East 55th Street. North Marginal was a two-way street carved between Lake Erie and a spur off I-90 called the Shoreway. Properties cut off by the Shoreway—the Coast Guard station, Burke Lakefront Airport, a private marina, a condominium complex—were accessed from North Marginal. Even at the busiest times of day, vehicular traffic here was scant. Middle of a workday, a steady stream of runners arced around the first responders.

“Popular place,” Cruz said, meeting the eyes of a curious runner rubbernecking as he slowed to a jog.

“It is,” the EMT said. “Few better places downtown for running. A solid two and a half miles with no cross streets. Whoever hit him came from the east. Blew him up.”

The body spoke for itself. No way it could be where it was being hit from the west. Cruz straddled the curb, which was a generous term for the inch separating the driving surface from the running path. A bicycle wouldn’t call it an obstacle. John Doe either never saw it coming or was unable to get out of the way. The impact had launched him into the airport’s tall security fence. The fence bounced him back, the one-hundred-eighty-pound body a pinball rebounding off bumpers.

John Doe had been moved, necessary and appropriate as he’d been alive when he was found.

“I’ll take care of him.” Cruz studied the victim. The man was mostly skin. He had taken off his shirt on the warm day, one of the first to be hot. A shirt lay on the edge of the path, marked by an evidence tag. Two other shirts lay close to the body; one black, one yellow and stained with blood.

The running shorts covered hip to mid-thigh. He wore socks, shoes, and a fitness device on his wrist. Skin was scraped off his arms, legs, chest, and face, the asphalt unforgiving. An AirPod was in his left ear, the right one missing.

Squatting again, Cruz felt the side seams of the shorts, finding zippered pockets. Inside the right one was a slim, card-size piece of plastic, a security badge for a building on East 9th Street. The dead man smiled out of a poor-quality image. Beneath was the name Colin McHenry.

“Detective, we found his phone,” one of the officers securing the scene called out. “It’s in good shape. Thumb print pass coded.”

“Open it before the ME takes him. Who found him?”

“A pair of runners. I parked them under the big tree.” The officer pointed across North Marginal to a small grove on a manmade hill. The two men waited anxiously under the tree, watching the activity. Both were runners. Both were shirtless. Both came to attention as Cruz approached and introduced himself.

“I’m Landon Chartres, this is Denny Bradford. We saw him as soon as we came around the bend. He was half in the street.” The otherwise straight line of North Marginal had a large curve bumping out to make space for an exit from the Shoreway. McHenry’s body would have been screened by the fence and shrubs separating the public from the airport’s private property.

“We knew someone was ahead of us,” Bradford said. “When you turn onto the Marginal, you can you see all the way to the curve.”

Chartres nodded like a bobblehead. “We saw the vehicle that must have hit him. It was the only one that passed us before we got to him. Black SUV. Part of the license plate was LDC. Those are my initials, so it caught my attention. I didn’t catch the make or model.”

Bradford looked behind him, to East 9th Street. He repeatedly shifted his weight from foot to foot. “He was only out of our sight to a few minutes. Would you say he had a five-minute lead, Landon?”

“At most. Probably more like three or four. We called 9-1-1 and pulled him out of the road. Anyone coming around the curve would have hit him. We used our shirts to try to stop the bleeding.”

As a pair of witnesses went, these two were easy, answering questions before he could ask them. They wanted to talk, maybe even needed to talk. “Did anyone pass you from behind, coming from East 9th going east?”

The pair looked at each other, huddled like they were on a pitcher’s mound deciding on a call. It was Chartres who answered. “We don’t think so, Detective, but we couldn’t swear to it. We weren’t paying that much attention. But the one that came toward us, the one with my initials, it was flying.”

“Is he going to make it?” Bradford asked, hope in his voice. “The ambulance got here fast. We kept pressure on his wounds, like they tell you to.”

“I’m sorry, he didn’t.” As if on cue, an engine started. The ambulance pulled away without a passenger. 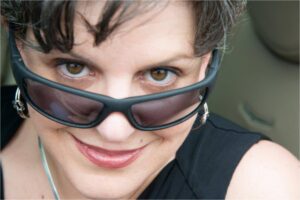 TG Wolff writes thrillers and mysteries that play within the gray area between good and bad, right and wrong. Cause and effect drive the stories, drawing from 20+ years’ experience in Civil Engineering, where “cause” is more often a symptom of a bigger, more challenging problem.

Diverse characters mirror the complexities of real life and real people, balanced with a healthy dose of entertainment. TG Wolff holds a Master’s Degree in Civil Engineering and is a member of Mystery Writers of America and Sisters in Crime.

Visit all the Stops on the Razing Stakes Tour! 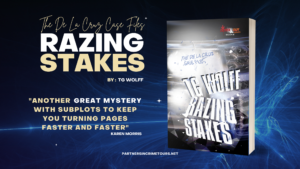