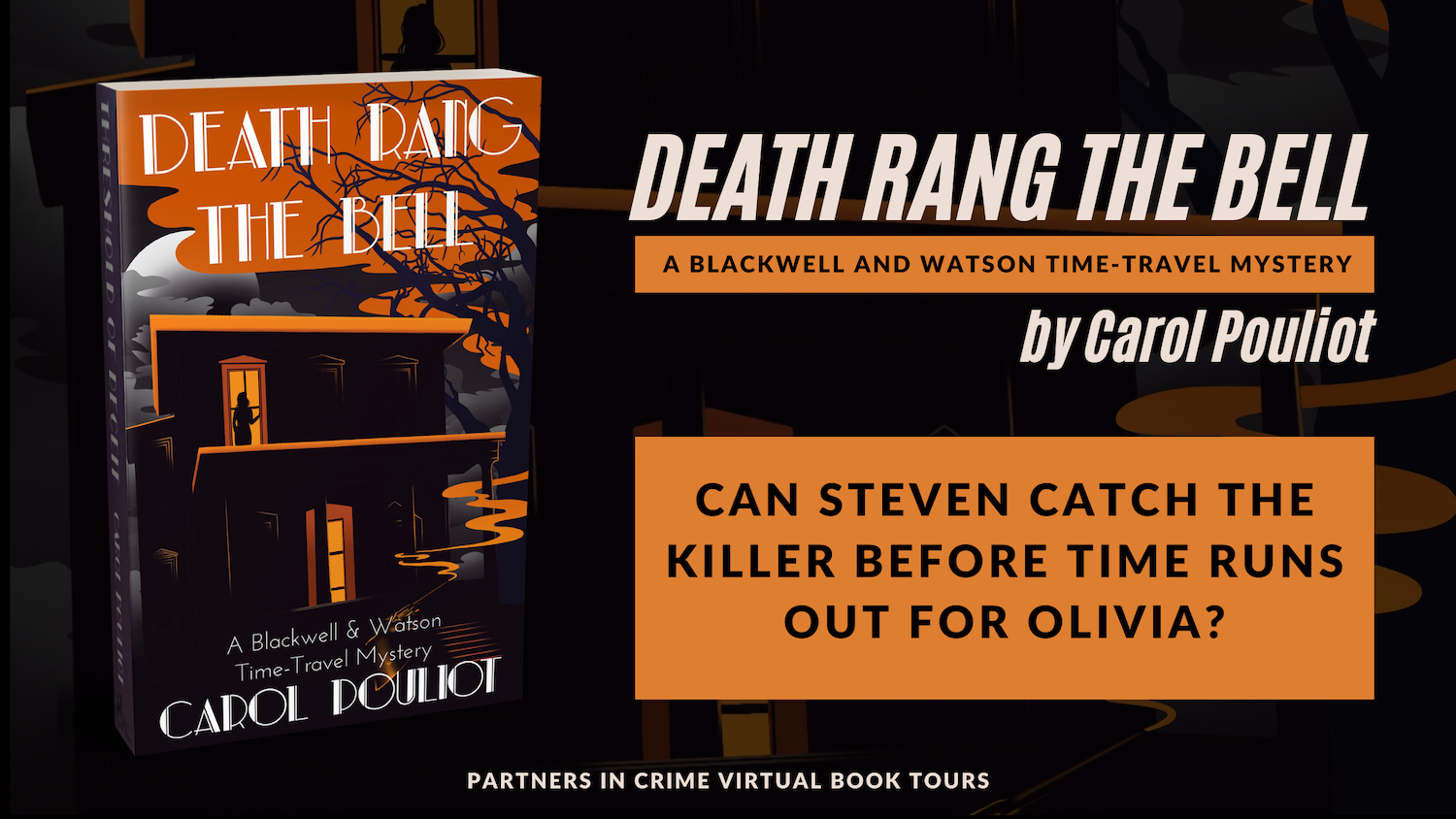 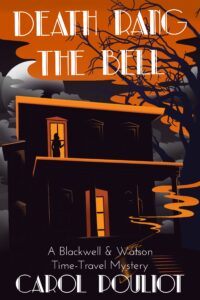 21st-century journalist Olivia Watson thinks traveling back in time to 1934 to attend a Halloween party with her friend Detective Steven Blackwell will be a lot of fun. And it is…until she witnesses the head of the Shipley Five-and-Dime empire murdered, and fears the killer saw her face.

The smart move is to return to the safety of the present, but Olivia possesses a secret and is about to defy the unwritten rules of time-travel. She convinces Steven to let her stay in his time and help unravel the motives behind the murder, even if it means risking her own life to save another.

When Steven delves into the investigation, he discovers how a bitter relationship, a chance encounter, and a fateful decision converged to set the stage for murder. In a maze full of unreliable clues and misdirection, dark secrets refuse to stay buried and forgotten ghosts won’t fade away. Steven is reminded that old sins cast long shadows.

Can Steven catch the killer before time runs out for Olivia?

To purchase Death Rang the Bell, click on any of the following links:

Hot coffee spilled over the rim and burned her hand. Lillian wanted to cry. At nine in the morning, she’d been on her feet since six and had seven long hours to go. She didn’t know how much longer she’d be able to keep it up. She was constantly exhausted and the struggle to breathe was worsening; some days it was nearly unbearable. She knew the disease was going to overpower her, and that moment was coming soon.

Lillian slid around some tables and set a heaping plate of eggs and bacon, potatoes, and toast in front of Arnie McCormack, then topped off his cup from the pot in her other hand. McCormack lowered his newspaper and leered, pinching her behind as she stepped away. Rude bastard. She’d like to pour the scalding coffee over his head and dump his breakfast right in his lap.

The only thing that kept her going every day was the thought of her beautiful little boy. Well, not so little anymore. He was growing up fast, nine years old in January. She managed a smile and wiped away a tear before it became a flood. Best not to think too much about things. Especially money. Lillian knew if she didn’t get the money somehow, she’d never see her son grow into a man.

And what about her letter? It had been four weeks since she’d mailed it. Surely he should have written back by now. She hadn’t been unreasonable, hadn’t asked for much, only enough to pay for treatment at the Little Red Cottage in Saranac Lake.

Dr. Trudeau’s Little Red Cottage. It sounded like heaven. Lillian had heard wonderful things about people being cured there. Imagine, cured! The thought made her dizzy.

Lillian returned to the lunch counter, using the backs of chairs for support. When she arrived at the griddle, she was breathing hard.

Tomorrow, she thought, if I don’t get an answer tomorrow, I’ll send another letter.

The Three Witches of Macbeth were doing a swell job. Annie, Molly, and Lilly led the parade of pirates, sailors, and fairy princesses through Knightsbridge, picking up ghosts, goblins, and a mummy along the way. Crowds of families followed the costumed children down Victoria Avenue to the entrance of The Elks Club, where, from the top of the staircase, The Three Witches hissed, “Double, double toil and trouble; fire burn and caldron bubble.”

Molly cried out, “Beware, all ye who enter here.” Then she thumped a tall gnarled staff on the stone step, and Annie and Lilly grasped the thick iron rings with both hands and heaved. As the massive oak doors creaked open, the masquerading children flew up the stairs and into the community room, awash with the scents of apples and cinnamon.

Carved pumpkins flickered in the semi-darkened room, revealing white cobweb-filled corners and big black spiders and bats hanging so low that adults had to duck. Seeing colorful bags piled on black-draped tables, one little boy jumped up and down, clapping his hands in glee. A girl grabbed her friend’s hand, and they did a little dance, and three teenagers slapped each other on the back. A Halloween treat awaited each of them. Eager to explore, the kids fanned out.

Steven gave her a look. “What if I had to rush out for an emergency?” he asked.

“Hi, Steven.” Decked out in an eye patch and pirate gear, Jimmy Bourgogne appeared from behind Olivia, swept off his hat, and gave a courtly bow, bending low to the floor. “Miss Watson.”

“Jimmy, you look fantastic,” exclaimed Olivia. “I didn’t recognize you with that mustache and goatee.”

“Congratulations, Jimmy. You fellas did a swell job,” Steven said.

“Thanks, but the credit really goes to Leon here.”

A slender young man with light brown hair joined them. He sported a plaid shirt with a tin sheriff’s badge pinned over his heart, red kerchief around his neck, and holster holding a toy gun attached to a leather belt.

“Hi, Leon.” Steven extended his hand. “This is my friend Olivia Watson. Olivia, Leon Quigg is my mailman.”

“Nice to meet you, Miss Watson.” Leon said, nodding as he doffed his cowboy hat.

“I’m glad to meet you, too. This is a wonderful party.”

Jean Bigelow sidled up to Olivia, yelling amidst the racket. “You made it!”

“Jean! Isn’t this swell?” Olivia chuckled to herself. Liz and Sophie would crack up hearing her talk like a real 1934 person.

After several months, acting like she belonged here had become second nature, but Olivia Watson didn’t belong here. She lived in 2014 and only visited 1934 from time to time.

This week Olivia was spending several days in Steven’s time. No passport, no suitcase, no plane ticket required. All it took was a simple step across the threshold of her bedroom door into Steven’s Depression-era house−simple but the key to her recently discovered ability to time travel.

“What are you reading tonight?” Olivia asked the librarian.

“That’s the one where the guy gets walled up, isn’t it?”

“Well, you look the part. I love your cape, very 19th-century.” Olivia touched a fold of Jean’s costume. “Ooh, velvet. I wish I’d worn that.”

The organizers had packed the evening full of entertainment. Steven and Olivia watched a magician pull pennies out of children’s ears and a rabbit out of his top hat, and wondered how he made the mayor’s watch disappear. The kids bobbed for apples, the water sloshing out of the metal washtub soaking the floor. The younger children played Pin-the-Tail-on-the-Donkey and Drop-the-Handkerchief, while the older ones played charades and told ghost stories.

At seven thirty, the kids crowded along the row of tables where members of the Elks handed out treats. Noses in their black-and-orange bags exploring the treasures within, they moved to the far end to select their favorite soda, handing the tall glass bottles of Hires Root Beer, Orange Crush, and Coca-Cola to Jimmy Bou and Leon Quigg, who were armed with metal bottle openers.

The evening culminated with story telling. The village librarian led the young children into a side room, spooky picture books in hand. The older ones gathered behind the curtain on the shadow-filled stage where Jean Bigelow waited in flickering candlelight. When they’d settled in a circle on the floor, Olivia among them, the librarian cleared her throat and began.

“The thousand injuries of Fortunato I had borne as I best could; but when he ventured upon insult, I vowed revenge….” 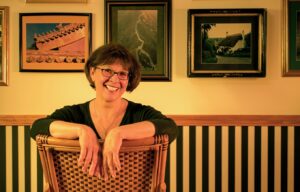 Carol Pouliot holds a BA in French and Spanish and an MA in French. She has taught French, Spanish, German, and English. She owned and operated a translating agency for 20 years. Her work has been published in Victoria magazine.

Carol is the author of The Blackwell and Watson Time-Travel Mysteries, which includes Doorway to Murder (book 1), Threshold of Deceit (book 2), and Death Rang the Bell (book 3).

Carol is passionate about the world and other cultures. She has visited 5 continents thus far and always has her passport and suitcase at the ready.

Visit all the stops on the Partners In Crime Book Tour 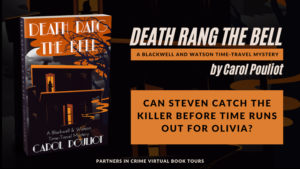