Mercy Creek is the second Jo Wyatt novel and the latest release by author M.E. Browning.

And don’t miss my review of Mercy Creek — On my blog November 2 as part of the Partners in Crime Book Tour. 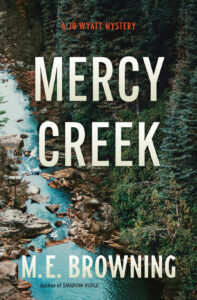 In an idyllic Colorado town, a young girl goes missing—and the trail leads into the heart and mind of a remorseless killer.

The late summer heat in Echo Valley, Colorado turns lush greenery into a tinder dry landscape. When a young girl mysteriously disappears, long buried grudges rekindle. Of the two Flores girls, Marisa was the one people pegged for trouble. Her younger sister, Lena, was the quiet daughter, dutiful and diligent—right until the moment she vanished.

Detective Jo Wyatt is convinced the eleven-year-old girl didn’t run away and that a more sinister reason lurks behind her disappearance.  For Jo, the case is personal, reaching far back into her past.  But as she mines Lena’s fractured family life, she unearths a cache of secrets and half-lies that paints a darker picture.

As the evidence mounts, so do the suspects, and when a witness steps forward with a shocking new revelation, Jo is forced to confront her doubts, and her worst fears. Now, it’s just a matter of time before the truth is revealed—or the killer makes another deadly move.

What should readers know about Jo Wyatt?

First, thank you for hosting me on your blog, Elena! It’s a pleasure to visit again.

Thrilled to have you back!

Jo is exactly the kind of officer you want to show up on your doorstep if you ever needed to call for help—not because she the smartest or strongest cop, but because she believes in the oath she took when she was first sworn in as an officer of the Echo Valley Police Department thirteen years ago.

She’s a second-generation cop with a deep love of the rural valley she lives in and serves. As a detective, she’s tenacious, respects her partner, and never loses sight of the goal—even when it means admitting she’s wrong.

This is the second book in the series, can Mercy Creek be read as a standalone? Or should readers start with book one?

Shadow Ridge is the first Jo Wyatt Mystery, but the beauty of police procedurals is that they tend to focus on one major crime per book, making them ideal to read as standalone stories.

That said, readers who start with Shadow Ridge, will be privy to a bit more detail regarding character backgrounds and how some of the relationships evolve (And for those on team Aiden, you’ll learn a bit more backstory).

How does Echo Valley’s geography help or hinder Jo Wyatt in her investigation?

Echo Valley sits at the base of the Rocky Mountains in the southwest corner of the State of Colorado.

While Jo is a municipal officer, the county climbs into the mountains, and as a detective, she often finds herself contacting people outside the city limits (a common occurrence in many jurisdictions. When I worked as a Durango police officer, I was cross-deputized by the La Plata County Sheriff).

Simply put, Echo Valley is stunning. As in many rural mountain communities, there are plenty of recreational opportunities and just as many ways to hurt yourself.

In Shadow Ridge, readers learned how snowy winters both help and hinder investigations.

What drew you to having a child as your missing person in Jo’s latest case?

In Shadow Ridge, Jo noted that policing a town where she’d grown up had pros and cons. She often knew where the bodies were buried, but everyone expected her to let them get away with murder.

Sometimes knowing a person adds valuable insight into an investigation—but not always. Sometimes it creates a bias that can be either positive or negative.

From the moment I started noodling the story that became Mercy Creek, I wanted to explore the inherent disconnect that arises when what we believe to be true is called into question.

“Bottom line? Never let the facts get in the way of a good story!”

You bring real-life details to your novels from your experiences in law enforcement. How do you balance knowing how things have to work in the real world, and keeping things exciting on the page?

Initially, I had a hard time striking a balance.

Over the course of a twenty-two-year career, I received my fair share of training (the academy alone was 852 hours). It took creating an amateur sleuth series to learn that while it’s great to write what you know, it’s every bit as important to figure out what to leave out.

Fortunately, the complexity of law enforcement actually provides a great deal of wiggle room for authors looking for a realistic solution to their story needs. In the end though, it’s important to remember that a novel is fiction, not a textbook.

Bottom line? Never let the facts get in the way of a good story!

The synopsis for the third Jo Wyatt Mystery is with my editor and I’m in the research phase for a standalone suspense novel involving three sisters.

Oh, and throw in a couple of short stories to round things out!

Everyone’s writing journey is different, and comparing yourself to other authors is almost always counterproductive. Everyone has their own journey, and more importantly, their own voice. Focus on developing that voice—because there is already a J.K. Rowling, Michael Connelly, and Sue Grafton. You may learn from each of them, but you are as different from them as they are from each other. Their success lies in their differences.

I’ve had pets nearly my entire life so it’s a bit odd not to have any at the moment.

I’ve made up for it though with the gargoyle that sits by my computer, the bronze owl peering at me from the top of an organizer,

and Stellaluna, the toy stuffed bat who grew up as a bird (that came with the children’s book of the same name that I’ve had for years) that hangs upside down from the lamp in my reading nook.

Bonus, they don’t walk across my keyboard when I’m typing!

One of my favorite Author Pet Corners to date! 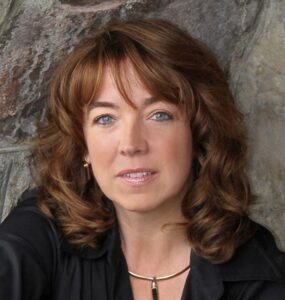 The first in the series, Shadow Ridge, won the Colorado Book Award for Mystery and the silver medal in the popular fiction category of the Florida Book Awards.

Writing as Micki Browning, she penned the Agatha-nominated and award-winning Mer Cavallo mysteries, Adrift and Beached, and her short stories and nonfiction have appeared in anthologies, textbooks, and diving and mystery magazines.

Micki served twenty-two years in law enforcement and retired as a captain before turning to a life of crime fiction.

Elena Taylor is the author of All We Buried, available now in print, e-book, and audio book format at all your favorite on-line retailers.

The Interview Part I

A Philosopher, a Biker, and a Crime Writer Walk into a Bar