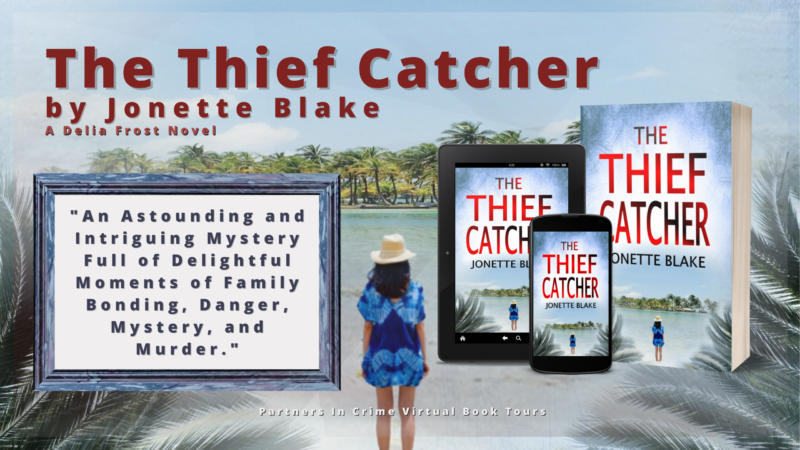 The Thief Catcher, the latest novel by Jonette Blake

The Thief Catcher by Jonette Blake 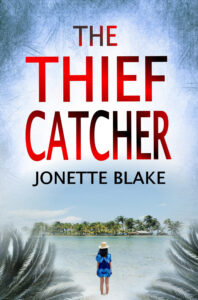 A holiday in this tropical resort could be her last.

Delia Frost is ready to quit her job and take a holiday. But she wants a relaxing holiday, not the one her husband dreams of; traveling in a motorhome.

Sending airfare money to her two children who are holidaying abroad so they can all meet up for this family holiday, she packs her and her husband’s bags for seven glorious days in a tropical island resort.

But even thieves need to take a holiday, and once more Delia finds herself caught in a web of thievery and murder. And this time it is not only her life in danger, it is the lives of her children.

Can she catch this murderous thief before it’s too late?

“Blake’s novel is at once a tightly plotted mystery and a tale unafraid to wander into the realm of family tales and character studies. Though it builds on genres some readers would initially think are opposed, this novel is expertly balanced and will intrigue readers of multiple tropes.” The Booklife Prize

To purchase The Thief Catcher, click here for links to a variety of outlets.

Guest Post by Jonette Blake, Author of The Thief Catcher

If you haven’t yet started reading the Delia Frost novels, you might not know that travelling in a motorhome is not something that my main character Delia Frost wants to do.

She feels she’ll be stuck inside a metal box doing all the cooking and cleaning. Much like at home, except with none of the comforts of home. Her reluctance to set off on this adventure with her husband is what puts her in the line of a serial killer and thieves turned murders. And yet, escaping in a mobile home for extended periods of time (I know of people who never came home!) is something many people do, and it’s also something my husband are planning for our retirement.

It’s also something I did on my honeymoon.

My hubby and I flew from Australia to New Zealand and we hired a motorhome for three weeks. It was an amazing experience. We travelled during the winter and we stopped overnight at the highest point of the Southern Alps, Arthur’s Pass.

We drove to Slope Point, the southernmost point of the south island of New Zealand, where a signpost told us it was 4803 kilometers to the South Pole. We took the ultimate driving holiday and stopped when it suited us. We drove over lush green mountains, saw seals sunning themselves at the side of the road, got snowed on, walked on volcanic land, walked on a glacier, and even took a boat cruise along a fjord.

It was wonderful to be able to wake up in the morning to a view of nature.

While many people look forward to retiring and taking a long road trip, I am a bit like Delia when it comes to my feelings on spending twelve months in a confined space. A part of me is thrilled at the idea of escaping and hitting that open road. But another part of me thinks it would be more fun driving on the open road in a convertible sports car and staying in bed and breakfasts every night.

I still have a few years until I retire. I guess time will tell what sort of adventure I’ll be taking. What about you? Do you have a retirement travel plan?

I love the open road myself! Though no thoughts of retiring . . .

Excerpt of The Thief Catcher

A door slammed, startling the cleaner who had left the balcony door open to air out the smell of bleach. The wind liked to whip across the ocean straight into the rooms on this side of the resort. Josephine pulled the glass door closed, slipped a mask over her face to block out the acrid stench of cleaning products, and popped her headphones onto her head.

Cleaning the hotel rooms with headphones was against hotel policy. It was written on the board in the staff room: PLEASE DON’T WEAR HEADPHONES WHILE CLEANING THE ROOMS. It had something to do with a cleaner once surprising a male guest who had left a sign on the door handle to make up the room, but had forgotten something and returned. The cleaner, a young woman from the Pacific Islands named Roxy, had not heard him return. The way Josephine had heard the story; Roxy claimed the guest had groped her, and the guest claimed he’d busted Roxy rummaging through his suitcase. Roxy had a habit of stealing items, so Josephine had believed the guest’s story. But Roxy was also stunningly beautiful, and often international guests would offer her money to come live with them, so Josephine had also believed Roxy’s story. Both were probably right.

Deep in her thoughts, Josephine hadn’t heard the door to the bathroom open. And she hadn’t heard someone creeping across the tiled floor. But the song on her music list ended and she heard a noise coming from within the closet.

This room was empty. Guests weren’t due to arrive until tomorrow.

Glancing at the balcony door, she saw it was closed.

Her mother believed in ghosts. Josephine did not.

She switched off the music. There. Something was inside the closet.

Probably a possum, she thought. Or a stupid bird. The resort was swarming with wild animals that liked to break into rooms and steal food or other items. Once, a magpie had flown in and stolen a woman’s bikini and used it in its nest.

Josephine crept towards the closet door. She was deathly afraid of animals. But she had to get it out of the room before it caused the worst kind of mess to clean.

Halfway across the room, the closet door opened.

They wore a white billowing top and pants and a large straw hat, as if they were a ghost, and her breath caught in her throat. She slipped off her mask, suddenly unable to breathe.

“You can’t be in here,” Josephine said. “This room isn’t supposed to be occupied till tomorrow. How did you get in?”

The intruder held up a hand and pointed a finger at the balcony door. This room was on the second floor. The intruder would have to have climbed thin air to get inside.

She still couldn’t see the intruder’s face: the hat was pulled down low. They were a small build, nothing discernible, and she was too startled to pull her gaze away to check for features that might tell her more about this person’s identity and intention.

It could have been a man beneath the loose-fitting clothes, but it could also have been a woman. And until she saw the face, she had no idea if they were young or old.

“I have to call the manager,” Josephine said.

The intruder’s finger wiggled in the universal sign of ‘I wouldn’t do that if I were you’.

Suddenly loud music blasted out of the small stereo – each room had a DVD player, a TV, a small stereo, and a selection of CDs. This was loud, noisy, angry music.

Josephine’s insides chilled. This was just how Roxy had described her attack.

At last the intruder lifted their head. She stared into a set of dark eyes that brimmed with anger.

“What are you doing here?” she asked, shouting to be heard.

The intruder stood there, blocking her exit through the front door. The balcony door wasn’t an option because it was a sheer drop to the pool area below.

“Okay,” Josephine said. “You can leave now. I won’t report you. I can keep my mouth shut. You ask my cousin if I’ve told anyone about the money she stole from her in-laws’ restaurant.”

Angry, dark eyes stared back at her.

Josephine took a step toward the door.

The intruder took a step forward.

She quickly backed up.

A knife appeared in the intruder’s hand.

Her weapon of defence was a spray bottle containing bleach, which she threw at the intruder before spinning to bolt for the balcony door.

She felt a hand grab her long hair, which hotel rules stated had to be tied back, only now her ponytail was being used like a rope to drag her into the room.

She started kicking and screaming. Realised that nobody would hear her screams over the music, but she screamed anyway.

A hand landed on her mouth.

She bit harder, so hard that she was flung across the room. She scrambled up, hissing like a cat, curling her fingers into claws, her long nails now her only defence.

The glint of the steel knife stopped her. And then the intruder surprised her by tossing the knife onto the lounge.

Her gaze was fixated on the knife as it swung through the air, and she followed its trajectory to the lounge. Her reflexes sprung into action. She lunged for the knife, but the intruder lunged at her, barrelling into her and knocking her to the ground, knocking the wind out of her.

“What’s the combination to the safe?” a gruff voice asked.

The hands around her throat were squeezing tight.

Tears coursed down her cheeks, blinding her.

And so she did. She let her body go limp, her mind go free, and she closed her eyes and took herself to a quiet place, a special place, one reserved for moments of enlightenment.

And then the tight feeling around her throat was gone.

She lay there, too afraid to move, and equally afraid not to leap up and run for her life.

And the music stopped.

In the distance, she heard seagulls squawking. A warm breeze blew into the room. Laughter billowed up from the pool. The balcony door must have been open for her to hear the sounds of activity down below.

How long should I lie here, she wondered? Five minutes. Ten? An hour?

She finally opened her eyes.

And realised that she couldn’t move. Her body was numb. Her mouth wouldn’t open. None of her limbs worked.

And then loud music blasted again. 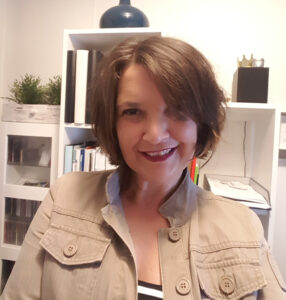 Jonette Blake writes supernatural thrillers and suspense thrillers. She is the author of over ten books and dozens of short stories, writing as D L Richardson. ​

She was born in Ireland and grew up in Australia. She lived through the 80s and music is still a big part of her life. When she is not writing, she plays her piano and guitar, listens to music, reads, and enjoys the beach. ​

She has held jobs in administration, sales and marketing, has worked in HR, payroll, and as a bank teller.

Her latest novel The Widow Catcher is based on the coastal town she lives in and her own bank teller experience. 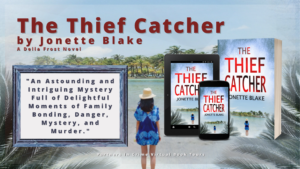 The Venturi Effect: A Legal Thriller by Sage Web