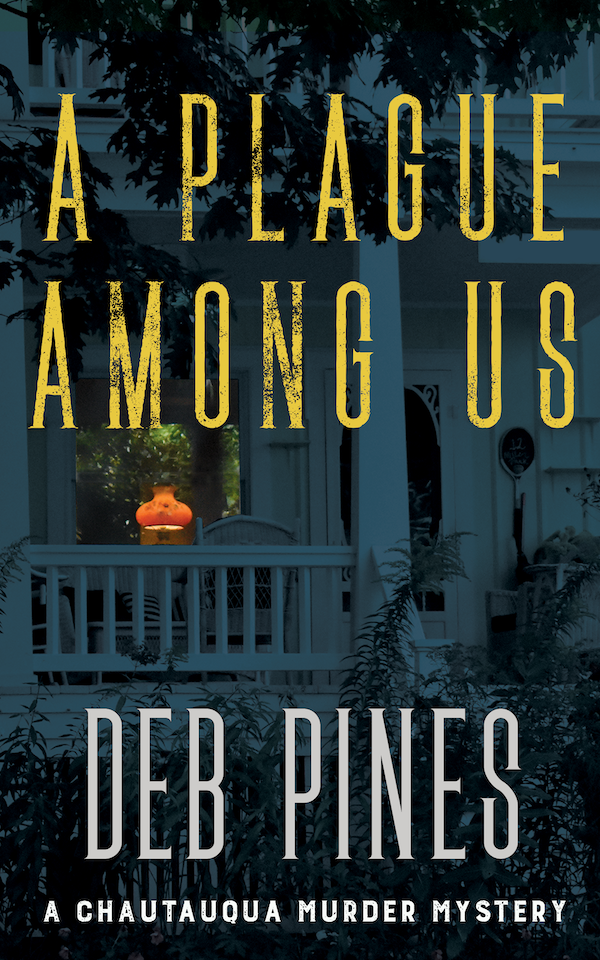 A Plague Among Us, the latest mystery by award-winning author Deb Pines

A Plague Among Us 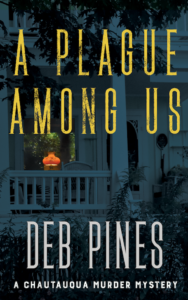 When Al Martin, the editor of a satiric newspaper in Chautauqua, N.Y., reportedly dies of COVID-19, the local consensus is: good riddance.

A sister suspects foul play. She wonders why Al was cremated in a hurry.

The police stay out of it.

So it takes reporter and relentless snoop Mimi Goldman to try to find which of Al’s haters— including an estranged wife, three bitter siblings, a secretive caregiver, old enemies and the many targets of Al’s poison-pen sarcasm—might be a ruthless killer.

The novel, No. 8 in a series called “an Agatha Christie for the text-message age,” once again offers page-turning suspense. Wit. And the unforgettable setting of Chautauqua, a quirky, churchy, lakeside, Victorian cottage-filled summer arts community that launched an adult-education movement Teddy Roosevelt called “the most American thing in America.”

Kirkus Reviews calls A Plague Among Us “an intriguing and engaging crime tale” and “enjoyable novel” with “captivating characters.”

To purchase A Plague Among Us, click on either of the following links: Amazon | Goodreads

Excerpt: A Plague Among Us

Mimi and Sylvia were on the road again, heading to the Tissue Donor Center in Jamestown to chase Winston Suarez.

The center wasn’t far from the Loves’ funeral home. But this time Google Maps was directing them to take the highway, not back roads.

“Too much,” Mimi said. “It’s crazy how I keep learning stuff without seeing how any of it means anything.”

Tom Love Sr., in Mimi’s opinion, wasn’t difficult. All he had done was stand up for his son before Sylvia picked a fight with him. But Mimi let it go.

“Well, one thing I’ll grant the older one,” Sylvia said.

“He’s above average in the looks department.”

“I thought you’re done with all of that nonsense.”

Sylvia moved to the left lane to take the ramp onto Route 17/Interstate-86 East and floored it.

Sylvia slowed down to fit into the slow lane, sticking behind a FedEx truck going a steady 70 miles an hour.

Mimi filled Sylvia in on what she had heard from Shannon about Liam and Patrick. Their denials of knowing anything about the pranks. Their claims the decisions to have no autopsy and a quick cremation were just expedient—so Patrick could get home.

“So what time does Winston Suarez get off work?”

Mimi had reached Winston once, described why she was calling. He got quiet, then hung up. After that, she called Winston and never reached him—leaving something like five or six messages.

They stayed on the highway about ten miles before taking the Jamestown airport exit, then winding around a maze of city streets until signs with a big “H” led them to the UPMC Hospital campus.

The Tissue Donor Center was one of many outbuildings with medical-sounding names surrounding the redbrick main hospital.

Some were done in their own architectural style. Most, like the Tissue Donor Center, imitated the low-slung, redbrick design of the hospital, down to having a white number (for their address) and a primary-colored letter on their sides.

The letters were explained on campus signs. Building A was the main hospital. Building B, the signs said, was Outpatient Svcs. C was the Sherman Medical Bldg. D was Imaging & Medical Bldg. E was Physical Therapy, Pharmacies. F was the Tissue Donor Cntr.

Sylvia zipped past the early letters of the alphabet, slowing at F, the Tissue Donor Cntr. The main door had its name above it, an intercom to the right. Near the curb, another sign said, “No Standing any time. Ambulance Lane.”

They didn’t see any ambulances, but Sylvia decided to wait for Mimi anyway in a parking lot across the street.

“Break a leg,” Sylvia yelled as Mimi got out.

If she did break a leg, no question, this was the place to do it. Her limb could be X-rayed at the Imaging Bldg.(D) and then set at Outpatient Svcs. (B).

At the door of the Tissue Donor Center, Mimi knocked.

The woman’s voice, through the intercom, was familiar.

Mimi laughed. “I guess I’m pretty predictable. Is he here?”

“He is. This is Hannah, by the way. We keep speaking on the phone. Why don’t I see if he’ll come out?”

Mimi had high hopes. How hard would it be for Winston to take a few steps to walk outside and see her?

On the other hand, blowing her off might be easier.

When she heard a ping, Mimi examined her phone. Sylvia, after coaching from her grandkids, texted like a teenager.

I asked for WS and someone said they’d get him. Just waiting.

Standing there, Mimi went through her email. Then she switched to her latest word game addiction: Spelling Bee in The New York Times.

Players have to make the most words, four letters or longer, from seven given letters, including one letter that had to be used in every word. The words that day had to be made from BLWCHAE, with all using an E.

Mimi started with the obvious ones: BLEACH, BLECH, BEACH, EACH, LEACH, LECH. She was moving on to trickier words when the center’s door swung open.

Out stepped a tall, handsome, dark-featured young man in a white surgical mask and blue scrubs with the name SUAREZ above his shirt pocket.

Mimi had expected an asshole, too lazy or too self-important to talk. Not a frightened young man.

“Can you say why?” she asked. “I have no idea why this case is at all sensitive.”

“How about off the record? You have my word that I’d never tell anyone you ever spoke to me.”

Deb Pines, author of A Plague Among Us 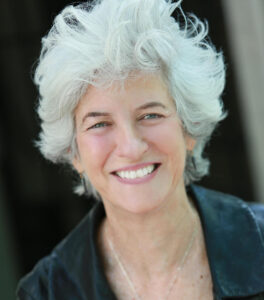 Deb Pines, an award-winning headline writer for the New York Post, is the author of seven Mimi Goldman novels and one novelette all set in the Chautauqua Institution in southwestern New York where they are top sellers.

A former reporter, Deb is also a lover of puns, show tunes and indoor cycling.

She lives in New York City with her husband Dave.

Visit all the stops on The Plague Among Us Partners In Crime Book Tour!

Death of an Heiress: Historical Mystery