I’m thrilled to have the prolific Elaine Viets visit with me today. Her wildly popular Dead-End Job series are being re-released as e-books. Hi Elaine! Thanks for visiting! 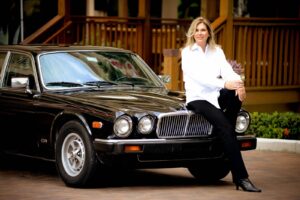 The versatile Elaine Viets has written 32 mysteries in four series. Her bestselling Dead-End Job series features PI Helen Hawthorne, the queen of the Dead-End Jobs. Helen works a different low-paying job in each novel. In Shop till You Drop, which launched the successful series, Helen sold bustier to bimbos. In Murder Between the Covers, she worked at a bookstore. Helen has been everything from a telemarketer (Dying to Call You) to a cat groomer in Catnapped! The New York Times calls this South Florida series “clever.”

The Dead End Job series is being re-released as e-books. I understand you actually did all of these jobs, can you talk about how that series came together? What made you decide to focus on crappy jobs you’ve experienced?

I worked most of the crummy jobs in the Dead-End Job series.

I didn’t actually wash cats for Catnapped! the way my PI Helen Hawthorne did, though I did have the help of Judge Tracy Petty. She not only judges pedigreed cats, but showed them, too. My worst Dead-End job was telemarketer for Dying to Call You. If I go to hell, I’ll be a telemarketer. The best – and I don’t consider it a real dead-end job – was bookseller for Murder Between the Covers. For my first Dead-End Job novel, Shop till You Drop, I sold bustiers to bimbos. For Murder with Reservations, I worked as a hotel maid and made 38 beds and cleaned 17 toilets a day, plus the Jacuzzi in the honeymoon suite. I actually scrubbed Hershey’s syrup out of the Jacuzzi.

The Dead-End Job series started after Don and I’d had a bad year:

he had Stage 3 cancer, my Francesca Vierling mystery series was canceled due to a publishing merger, and we were being audited by the IRS. To pay the mortgage, I worked in a bookstore, and that’s when I got the idea for the DEJ series. Each book featured a different low-paying job. I worked everything from customer service at a country club whose motto was “Do you know who I am?” – that was Clubbed to Death – to selling expensive bridal gowns in Just Murdered. For Checked Out, set at a library, I shelved books. The librarians loved me – I’m six feet tall and I could reach the top shelves.

This was a mostly pink collar world – low paying jobs for women. I was fascinated by how customers behaved. Often they indulged in what I called “clerk abuse.” They’d had a bad day with their boss or their spouse, and they took out their frustration on the bookseller or the customer care person. Clerk abuse was no fun – but I killed them in my novels.

“Death Investigators are the paralegals of the forensic world.”

Your multiple series run from traditional mystery to cozy – what makes you choose to write in different sub-genres? Does the process differ for you?

I started writing hard-boiled mysteries with my Francesca Vierling

newspaper series. When a publishing merger wiped out Dell books and ended the series, I was heartbroken. It took me two years to come up with another idea, the Dead-End Job mysteries. Penguin editor Genny Ostertag bought that series and it lasted for 15 books.

Penguin had great success with cozies and asked me to try a mystery shopper series. My mother was a mystery shopper and so I wrote the first Josie Marcus, Mystery Shopper mystery, Dying in Style. That book tied with Stephen King for first place on the independent mystery booksellers list. Josie was supposed to be a two to three book series, but Penguin kept renewing the contracts until I’d written 10 mystery shopper novels. The cozy genre has many restrictions – no graphic sex or violence, no cussing. After 10 books, I figured I’d taken the series as far as I could, and discontinued it.

“Eleven years ago, I had six strokes…”

You have survived six strokes and brain surgery – how did that experience impact your writing?

Eleven years ago, I had six strokes, including a hemorrhagic stroke, and a coma.

I was in the hospital three months and my nearly complete recovery took four years. Three days before the strokes, I’d gone to the ER with blinding migraines and other symptoms, and the neurologist on call told me I was too young and fit to have a stroke and sent me home. That was terrible advice – for anyone. Three days later, my husband found me unconscious and I wound up in the hospital for real.

When the strokes hit, I’d been about to leave on tour for Murder with Reservations, my DEJ mystery set in a hotel. While I was in a coma, the mystery community held a tour by proxy and sold my novels coast to coast. They saved my career. My husband saved my life. I recovered, thanks to the help and good wishes of my family and friends.

I used that experience in Brain Storm and killed (on paper) the doctor who misdiagnosed me for my DI, Angela Richman. The brain surgeon who saved her life is accused of killing the incompetent doctor. DI Angela Richman is the ultimate unreliable narrator – she’s drugged and brain damaged but has to save the man who saved her.

With thirty-two novels under your belt – what advice do you have for writers debuting their first novel?

Writing is a business. Know your business. Join professional organizations for networking and to meet other writers. I belong to the Mystery Writers of America, ITW and Sisters in Crime. Attend conferences and writing workshops, especially ones that are suited to your sub-genre. Get to know your local bookstores.

Take us through writing a novel – what’s your process like?

I’m working on an outline for my next Angela Richman novel now. I do a detailed chapter by chapter outline while I research what forensic information I’ll need for the story. I also consult police and death investigator experts. Once that’s finished, I’m ready to start writing. I try to finish 1,500 words a day. In the morning, I reread what I wrote the day before. I may throw it out because I don’t think it’s working, but the novel seems to progress with this system. The actual writing taken four to six months. Once it’s finished, I revise, then turn it in to my agent, Joshua Bilmes at JABberwocky. Joshua does a line edit of my work and sometimes demands a complete rewrite. It doesn’t go to the editor until Joshua approves it.

I’ve just finished Ice Blonde, my Angela Richman, Death Investigator novella, which will be published this June. Deal with the Devil and 13 Short Stories, a collection of short stories published by Crippen & Landru, will be published April 28. It debuts at the Malice Domestic mystery conference in Bethesda.

A writer writes. It’s fun to talk about writing, take classes and tell yourself, “I need to learn more about writing short stories, or outlining my novel, or plotting a thriller.” All that may be true. But if you’re a real writer, you’ll take the difficult step of sitting alone at your computer and actually writing. You’ll write novels and they may be so terrible you’ll bury them in a desk drawer. But that’s how you learn how to write. Keep on writing.

What Does a Venezuelan Jail, Gang Members, and a Brand New Novel Have in Common? Christina Hoag!